Please ensure Javascript is enabled for purposes of website accessibility
Log In Help Join The Motley Fool
Free Article Join Over 1 Million Premium Members And Get More In-Depth Stock Guidance and Research
By Alex Carchidi - May 22, 2021 at 6:30AM

Revenue growth will probably accelerate soon, but it might not be enough.

When it comes to biotech companies, a bird in the hand is not always worth two in the bush for shareholders. A steady drumbeat of good news from clinical-stage projects in the pipeline often makes for higher stock prices. Once those projects get regulatory approval, however, actually selling the drugs means facing a handful of sticky issues like manufacturing them profitably at scale.

And that's exactly the challenge facing oncology drugmaker Exelixis (EXEL 0.14%). Its three products have been on the market for some time, but investors haven't seen a consistent upside. Will the company's efforts to get expanded approvals for its drugs lead to revenue growth that will buck the trend, or are its issues more chronic in nature? 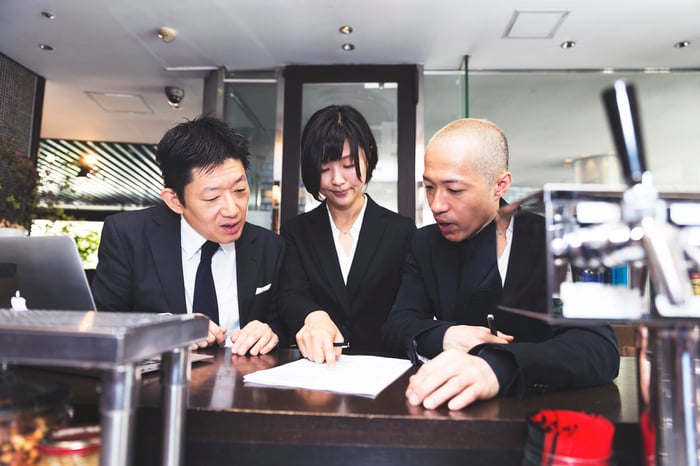 Exelixis has a bevy of recent and upcoming catalysts that could lead to an uptick in growth. In late January of this year, the U.S. Food and Drug Administration (FDA) approved an expanded indication of Exelixis' Cabometyx drug for medullary thyroid cancer, allowing it to be prescribed to treat renal cell carcinoma (RCC) as a first-line treatment in conjunction with Bristol Myers Squibb's drug, Opdivo. That's sure to drive additional sales revenue for the next few years, and the company is investigating at least seven other expanded indications in clinical trials as well.

Six of the seven trials are already in phase 3 for indications, like differentiated thyroid cancer. In 2021, the company could submit the regulatory paperwork for commercialization for as many as three of those six trials. Should these trials bear fruit and get regulatory approval, Exelixis will increase its returns from Cabometyx even further. Notably, its prior efforts to expand the drug's indications were successful, and preliminary data for the expanded approvals looks quite promising. Shareholders should get a bump in the stock price for each approval and potentially for each regulatory submission as well.

In terms of finances, management anticipates earning up to $1.25 billion in total revenue in the 2021 fiscal year. The company is narrowly profitable, and quarterly revenue has increased by 45.2% over the last three years as a result of Cabometyx sales ramping up. Furthermore, with $1.19 billion in cash, $52.84 million in debt, and $841.21 million in operating expenses in all of 2020, it has plenty to spend on innovation.

In my view, a history of low earnings makes this stock hard to recommend. Since its first drug was commercialized in 2012, Exelixis has struggled to show consistent profitability, strong revenue growth, and expansion of its earnings before interest, taxes, depreciation, and amortization (EBITDA). While new expanded indications of Cabometyx could juice up revenue, that hasn't led to sustained and positive earnings in the past. 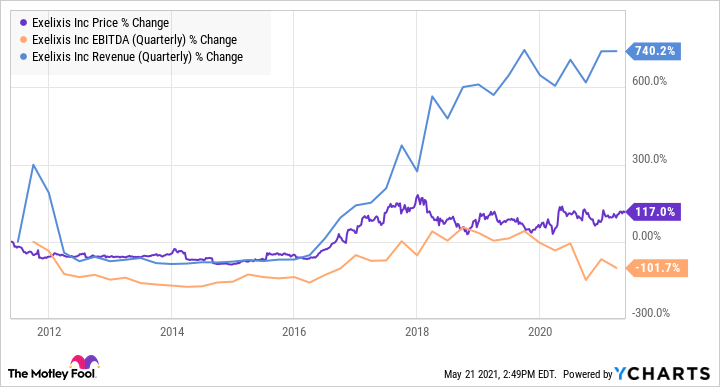 Then there's the company's most recent performance report. Its cost of goods sold (COGS) increased by 42% year over year, and its selling, general, and administrative expenses (SG&A) increased by 63% in the same period. In sum, total operating costs rose by a whopping 58%. Management attributes these changes to higher issuance of stock-based compensation to key employees and leaders, though that doesn't explain the rise in COGS. Nonetheless, COGS is expected to reach 6% of total revenues in 2021 despite the increase, which isn't very alarming. So keeping stock-based compensation and other personnel costs under tighter control will be an important issue for investors, especially if the company's profitability continues to slip away.

While it's entirely possible that the upcoming new indications for Cabometyx could make the earnings situation different this time around, there isn't much evidence to support that conclusion as of right now. If, on the other hand, Exelixis takes steps to control its SG&A and COGS expenses over the next year, investors could probably justify a purchase so long as margins rise accordingly.