Please ensure Javascript is enabled for purposes of website accessibility
Log In Help Join The Motley Fool
Free Article Join Over 1 Million Premium Members And Get More In-Depth Stock Guidance and Research
By John Rosevear - May 24, 2021 at 9:58AM

The Chinese electric-vehicle company's manufacturing partner agreed to boost output to 20,000 per month.

Chinese electric-vehicle maker NIO (NIO -4.32%) said that it has extended its current manufacturing deal for another three years -- and that its manufacturing partner has agreed to double the factory's production capacity.

Although the company has talked from time to time about building a factory, NIO doesn't currently own one. Its vehicles are manufactured in a factory belonging to Chinese state-owned automaker Jianghuai Automobile Group (JAC) in the industrial city of Hefei, where NIO is headquartered. 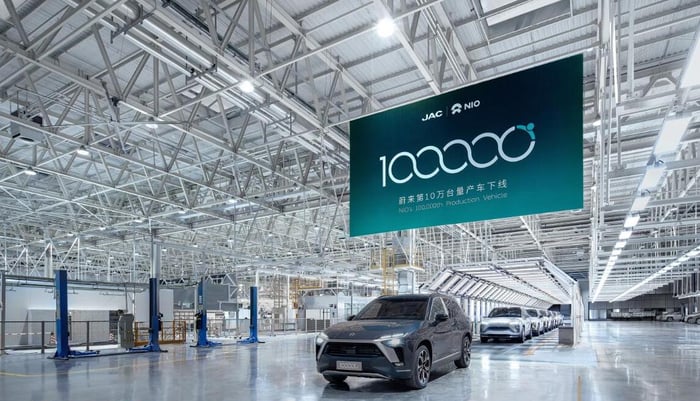 JAC's Hefei factory built its 100,000th NIO in April. The factory now has the capacity to build 10,000 NIOs per month; that will double under a new agreement. Image source: NIO.

Under the new deal, the JAC factory will continue to build NIOs for another three years, through May of 2024. JAC also agreed to increase the manufacturing capacity of the factory to 240,000 NIO vehicles per year (or 20,000 per month). That will roughly double the production capacity available to NIO.

NIO said in April that it had completed upgrades that will allow it to manufacture up to 10,000 vehicles per month, though ongoing shortages of battery cells and semiconductors have so far limited it to a lower output.

As with many deals involving Chinese automakers, the details of this arrangement are a bit complicated. While JAC owns the factory, it was designed and built specifically for NIO, and it's operated by a third company called Jianglai Advanced Manufacturing. Jianglai is a joint venture between NIO and JAC in which NIO holds a 49% stake.

NIO and JAC didn't reveal when that increase in manufacturing capacity will be implemented.