Please ensure Javascript is enabled for purposes of website accessibility
Log In Help Join The Motley Fool
Free Article Join Over 1 Million Premium Members And Get More In-Depth Stock Guidance and Research
By Jim Halley - May 25, 2021 at 6:08AM

A tax refund is a great opportunity to invest in these three medical companies that have solid revenue growth ahead.

Congratulations on getting some money back in your income tax return! Now, put it to work. The following medical stocks are an ideal place to invest that cash because of their consistent total returns.

Owens & Minor (OMI 4.53%), AbbVie (ABBV 1.67%), and PerkinElmer (PKI 0.24%) all have diverse revenue streams that make them less susceptible to an economic downturn. They offer strong demonstrated revenue growth over the past few years and appear well-priced based on their valuations. 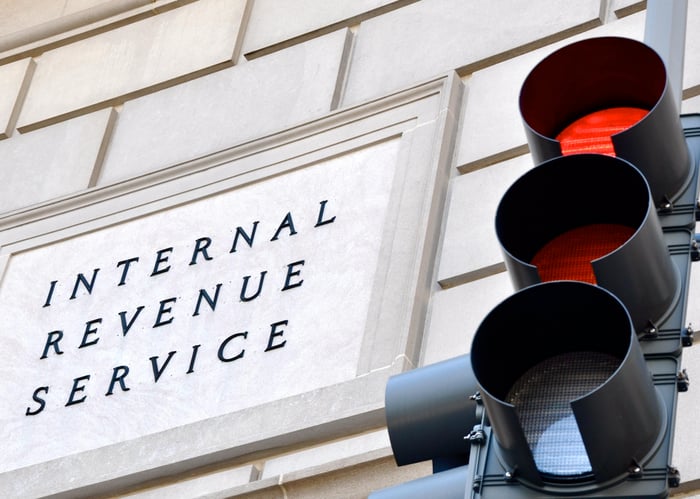 Owens & Minor will benefit from a return to normalcy

Owens & Minor stock is up more than 335% over the past 12 months and more than 17% this year, and I believe it may still be underpriced. The company sells medical products and services to the healthcare field, from surgical gloves and exam room supplies to sterilization products and logistics. The pandemic-induced dip in elective procedures last year slowed the company down in 2020. Now that the pandemic may be ebbing, this is an excellent time to buy Owens & Minor.

The company paid down debt last year, and the likely rise in elective procedures this year along with a continued high use of personal protective equipment (PPE) should help the company's bottom line.

AbbVie's stock is up more than 25% over the past 12 months and more than 9% this year. The company has plenty of growth but it's also a value play, as its dividend pays $1.30 per share per quarter, which gives it a yield of 4.44%.

The company is off to a fast start this year. In the first quarter, it reported revenue of $13.01 billion, up 51% year over year, and operating earnings of $4.1 billion, up 13.8% over the same period in 2020. The only thing that has kept the company's stock in check is the concern about how the company will replace the revenue it will lose in 2023 when Humira loses its patent protection in the U.S. That's not a small concern. In the first quarter alone, the drug pulled in $4.8 billion in revenue.

On top of that, AbbVie is facing pressure from Congress regarding the company's drug prices. On Tuesday, a report by the House Oversight and Reform Committee found that AbbVie had inflated its prices for Humira, which is used to treat rheumatoid arthritis and other autoimmune diseases, and for Imbruvica, which is a therapy for mantle cell lymphoma and other cancers.

But those are potential worries. The reality is AbbVie is a big, diversified pharmaceutical company with a huge stable of drugs that should easily survive once Humira-type biosimilars are allowed in the U.S. three years from now. Imbruvica brought in $1.268 billion in revenue and the company had several other therapies that pulled in more than $400 million in the quarter, including Botox therapeutic ($532 million), Botox cosmetic ($477 million), plaque psoriasis treatment Skyrizi ($574 million) and hepatitis C drug Mavyret ($415 million).

PerkinElmer, flush with cash, is on a growth spurt

PerkinElmer's stock is up more than 55% over the past year, though flat so far this year. The company had tremendous growth last year that continued into the first quarter, and it is setting itself up for the future with a balanced revenue stream.

PerkinElmer has two segments: discovery and analytical solutions, and diagnostics. The first segment involves industrial, environmental, and food applications while the second is focused on applied genomics, reproductive health, and emerging market diagnostics and includes sales of high-end laboratory equipment. In addition to this diversity, the company also has a geographical balance with 40% of its revenue coming from the Americas, 30% from Europe, and 30% from Asia.

The company developed one of the most accurate assays for COVID-19 and is using the money from that test to fund some key recent acquisitions. The company just initiated the purchase of Immunodiagnostic Systems, a British company that tests for autoimmune disorders, endocrinology, and infections diseases. The $155 million deal, expected to be completed in the third quarter of 2021, is on top of the company's $383 million all-cash purchase of Horizon Discovery in November, which beefs up its life science portfolio with CRISPR and gene-editing capabilities. 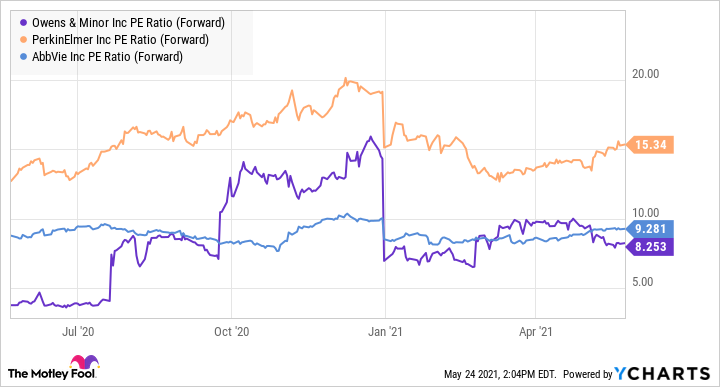 Still a good time to buy these stocks

While these healthcare stocks have risen over the past 12 months, I still see them as a good use of your income tax return. Looking at their forward price-to-earnings (P/E) ratios, Owens & Minor sits at 8.2, AbbVie is only 9.2, and PerkinElmer trades around 15.3. All of them are trading at less than half that of a typical pharmaceutical or medical products company, suggesting they aren't overvalued (yet).

Of the three, I like the direction PerkinElmer is headed in the most. The company has increased its return on equity, and its total return over the past 10 years of 388% is the best of the bunch. It is doing a good job of using a strong year to grow the company through complementary acquisitions.

AbbVie's combination of an outstanding dividend and its stable of drugs behind Humira shows me the company will likely continue to benefit loyal stockholders. Owens & Minor is also poised to do well this year, with elective procedures likely to increase.

How PerkinElmer Beat Expectations in Q4