Please ensure Javascript is enabled for purposes of website accessibility
Log In Help Join The Motley Fool
Free Article Join Over 1 Million Premium Members And Get More In-Depth Stock Guidance and Research
By Jason Hawthorne - May 26, 2021 at 10:15AM

Traders of Bitcoin, Dogecoin, and Safemoon are trying to follow in the footsteps of Warren Buffett in one way.

If you ask a group of people why they are doing something, it's likely that even those behaving the same way will give you a range of answers. Individuals can have all kinds of motivations. When someone decides to rent or own their home, it might be because of affordability, flexibility, or the preference of their significant other. Similarly, any asset has buyers and sellers all making choices for their own reasons.

I was reminded of this when Bitcoin (BTC 6.48%) and other cryptocurrencies crashed again last weekend. The volatility prompted many online conversations about a bubble and more volatility ahead. However, those asking if the wild swings and popularity of meme assets like Dogecoin (DOGE 5.48%) is a sign of a speculative mania are missing the point. Here are just three of the signs that traders don't care if we're in a bubble. 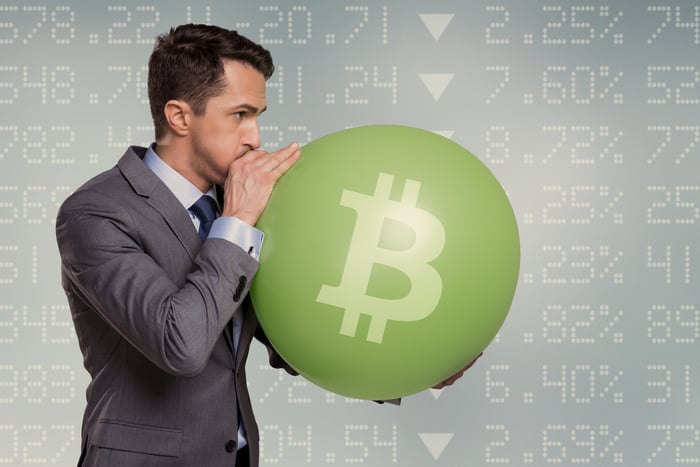 One explanation of the weekend sell-off was that excessive leverage is being used to buy cryptocurrencies. Leverage amounts to borrowing, and it can wipe out an investment fast. An example of leverage many never considered until the Great Financial Crisis was owning a home. Even if you put 20% down on a home, you are borrowing the other 80%. If the value of the house goes down 10%, you've lost half of your original investment. Let's take a $500,000 house with a down payment of $100,000 and run the numbers.

In the example, the original leverage is 4-to-1. There are four dollars borrowed for every one dollar of equity. In 2007, Lehman Brothers reportedly had leverage of 31-to-1. Notice how the leverage increased to 8-to-1 as the price of the home fell. Lenders don't like that and when they ask borrowers to make up the difference, those borrowers are forced to sell whatever they can.

Last week, some firms in Asia were reportedly allowing crypto traders to employ 100-to-1 leverage. It's reminiscent of the housing bubble where people bought houses with no money down and just walked away when the value fell. For some, if it was cheaper to leave the keys in the mailbox than pay the mortgage, that's what they did.

For leveraged owners of cryptocurrencies, a 100-to-1 bet on Bitcoin likely means everything you own gets sold when the price drops even a few percent. According to one report, about 800,000 crypto accounts were wiped out last week. Activity like that suggests that instead of fearing the market is in a bubble, traders are taking on leverage with the precise hope that the market is in a bubble. They're just hoping it inflates even more.

Supporting that theory are the recent comments of Barstool Sports founder Dave Portnoy. He became an internet celebrity during the pandemic for his livestream of day trading sessions and irreverent attitude toward political correctness.

Portnoy decided to choose a new cryptocurrency to back after getting frustrated with comments from Elon Musk that seemed to manipulate the price of Bitcoin. He didn't do a lot of research before announcing his decision. He chose Safemoon as his favorite, primarily because he liked the word "moon." He told his followers he didn't know how it worked and that it might be a Ponzi scheme. If that sounds like a warning, it wasn't. He followed up with the suggestion that if it was a Ponzi scheme, it was best to get in early.

Aside from the moral implications, it was terrible financial advice. Despite the obvious red flags, the price of Safemoon promptly jumped almost 25%. For the rest of the week it tumbled along with every other cryptocurrency. Moves like the initial reaction have many pointing to the current environment as a bubble. There are plenty of other similarities.

Recent research into the famous Dutch tulip bubble in the 1630s suggests the plague played an instrumental role in the calamity. Inheritances filled the pockets of the living  from recently deceased relatives. Maybe the Dutch felt wealthy, or maybe they gambled on bulbs because they were happy to be alive. Regardless, it isn't hard to connect the dots. We are currently climbing out of a global pandemic where the U.S. government passed three stimulus bills worth about $5 trillion. Some of that free money undoubtedly found its way into the cryptocurrency market as speculative bets.

3. Statistics: Someone is going to be the outlier

It may seem like a stretch to connect one of the greatest living investors with cryptocurrency. Warren Buffett has proven his investing chops over decades. A mere $1,000 invested in Berkshire Hathaway in 1965 would be worth more than $31 million today. That said, his performance could be statistically expected. It's more accurate to say it could have been expected that someone would put up those results.

Buffett has averaged about 20% per year of returns. In 18 of the past 49 years the stock market has been up at least 20%. Further, over the past 50 years the average annual return is about 11% -- roughly half Buffett's performance. It's impressive, but with so many investors over that period someone was likely to post that performance just by sticking with it. It doesn't mean it was luck, just statistically expected.

Crypto traders may not be calculating the odds, but the allure of asymmetric gains and the belief that someone is going to get rich is all the incentive they need. Whether the market is in a bubble has no bearing on someone making that bet. In fact, being in a bubble might make the behavior even more rational. In normal times, the odds of an abnormal outcome are lower.

You only live once

It all adds up to what could be called the "YOLO" trade. In other words, gambling a small amount in an effort to gain a lot might make sense if the money is free or if it seems like the only path available.

Historians will probably look back on this period with amusement, pointing to the confluence of factors that led to oddly named digital coins and wild swings for those trading them. One thing they might miss as they list all the signs that we were obviously in a bubble is that most people participating in it didn't seem to care.