Please ensure Javascript is enabled for purposes of website accessibility
Log In Help Join The Motley Fool
Free Article Join Over 1 Million Premium Members And Get More In-Depth Stock Guidance and Research
By Brett Schafer - May 28, 2021 at 7:30AM

The sports league has been a publicly traded stock since its merger with Liberty Media in 2017.

A lot of investors, myself included, dream of owning a slice of their favorite sports team. But with many leagues and teams staying private, individual investors have historically been shut out from investing in all but a few of their favorite franchises. However, since being acquired by Liberty Media in 2017, racing league Formula One Group (FWONA) has been a publicly listed company.

The league is available as a tracking stock, which means the business is still a subsidiary of Liberty Media but you can buy shares in Formula One and realize any potential gains or losses without having to invest in the entire Liberty entity.

Is it time for Formula One stock to race into your portfolio? Let's take a look. 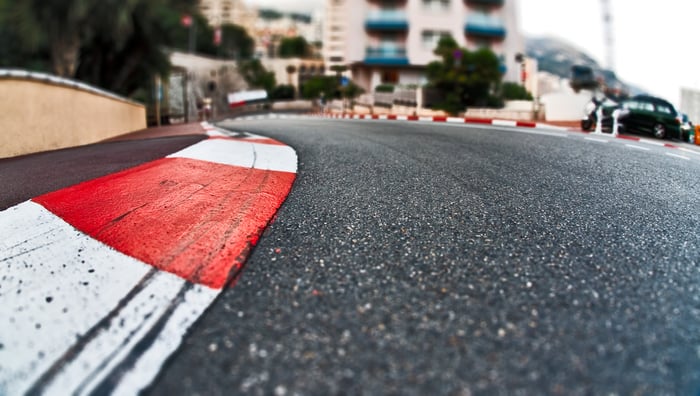 Formula One Group owns the rights to the F1 World Championship, a racing league that competes in different cities around the world in a nine-month season. The league has 10 teams and 20 drivers owned by businesses like Mercedes, Ferrari, and Red Bull (yes, the energy drink company has a team).

The league makes money through video broadcast rights, sponsorships, and ticket sales at each event. At the end of each year, depending on where they finish in the standings, each team gets a payout from the league based upon a previously agreed upon contract known as the Concorde Agreement. Although the details of the Concorde Agreement are unknown, it makes Formula One's business model fairly simple, with the league keeping a predetermined amount of the sales it generates each season.

With the onset of COVID-19 in March of last year, Formula One had to temporarily shut down its operations and only ended up running 17 races, with most having no fans in attendance. This caused sales in Q1 and Q2 of 2020 to fall more than 80% from the year prior. However, things recovered nicely in the second half of 2020 once the season got back up and running, with sales only falling 5.7% and 7.3% in Q3 and Q4, respectively.

Things are looking better in 2021 with a full season of 23 races scheduled, but the league is still slowly waiting for fans to be allowed back into stadiums based on the various government mandates in the different countries the league races in.

The easiest way for Formula One to grow its business is to grow the number of fans of the sport. Management has numerous initiatives to get that going. The most successful so far has been the Drive to Survive documentary series that it contracts with Netflix (NFLX -1.64%) each year. The show goes behind the scenes with the 10 teams during the previous year's season and has helped introduce fans to the sport, hitting No. 1 on Netflix's rankings in many countries, including the U.S.

On other fronts, the league has a new race coming to Miami in 2022 as another way to potentially grow the sport's appeal in America, which has historically lagged in viewership versus other regions around the world. The league has recently changed its competitive rules as well, putting caps on the amount of money each team can spend each year on their cars. This will hopefully make the sport more competitive, as historically the teams with the most money -- like Mercedes, Ferrari, or Red Bull -- win each year, dampening the competitive aspect of the races for fans.

Lastly, Electronic Arts (EA -1.50%) recently bought Codemasters, the gaming company that owns the rights to the F1 racing games. EA Sports is the No. 1 sports video game company in the world, and can hopefully supercharge the F1 franchise, bringing more fans to Formula One along with it.

Formula One Group has a lot of potential to grow its business, but the stock does trade at a steep valuation. With a market cap of $9.34 billion, the company has a price-to-sales ratio of 4.7 and a price-to-operating cash flow ratio of 32 based on its 2019 financials. 2020 looks a lot worse, as you might expect, as revenue was almost cut in half and earnings and cash flow went negative. The business also has around $2 billion in net debt (total debt minus cash) that it will have to pay back eventually.

However, if Formula One can keep up its viewership growth trajectory with the Netflix series and Miami race, there's reason to think the company can grow its earnings substantially over the next few years and beyond. If that is the case, Formula One Group looks like a stock trading at a reasonable price for any investor with a long-term time horizon.