Please ensure Javascript is enabled for purposes of website accessibility
Log In Help Join The Motley Fool
Free Article Join Over 1 Million Premium Members And Get More In-Depth Stock Guidance and Research
By Zhiyuan Sun - Jun 3, 2021 at 9:36AM

This coronavirus vaccine drugmaker is having trouble getting its act together -- and has led its investors on a wild ride.

Over the past year, Novavax (NVAX -5.01%) stock has swung between extremely overvalued and extremely undervalued, with a share price ranging from a low of $40.50 to a high of $331.68. It's currently down more than 50% from those all-time highs, which it reached in February.

Investors were thrilled that the company had developed a solid coronavirus vaccine candidate, but were then shocked by its logistical problems. Is now the time to buy the dip? 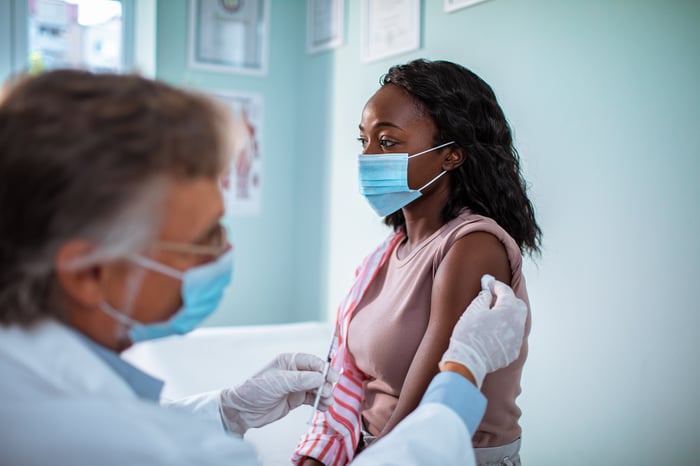 It's clear that the science behind the vaccine is solid. As an emerging biotech, however, Novavax began encountering problems with production and regulatory filings. To date, NVX-CoV2373 has not received emergency authorization in any country. Meanwhile, the company has had to delay its goal of producing 150 million doses per month all the way from the second quarter of 2021 to the fourth quarter.

The delay means that Novavax will probably miss the vaccine rollout in G7 countries. As a result, investors began abandoning the stock en masse.

On May 6, Novavax executed an agreement with global vaccine alliance Gavi to manufacture and distribute 350 million doses of its recombinant protein-based vaccine to developing countries. Under a separate agreement, the company plans to produce 1.1 billion doses of its vaccine candidate manufactured by the Serum Institute of India (SII). With the facilitation of UNICEF, Novavax transferred its vaccine technology to SII at no cost.

That brings up the main reasons why the stock is undervalued -- its international expansion efforts. While it's true that vaccine demand is plummeting in the U.S., things are not looking so good elsewhere. As of now, only 10% of the world's population has received at least one dose of coronavirus vaccine (it's mostly developed nations boosting that number).

If Novavax manages to get its act together and start producing vaccines by the end of the year, it could very well witness billions in revenue in 2022. The company would have to make some pricing concessions -- say, offering its vaccines at $3 to $4 per dose. However, keep in mind that its market cap has fallen to $10.94 billion and the company still has $2 billion in cash in the bank, giving it an enterprise value of less than $9 billion. That's very cheap for a manufacturer with 2 billion doses in production capacity.

Given the strength of its coronavirus vaccine candidate, its current valuation, and the growing demand for vaccines beyond the U.S., Novavax stock is an ideal biotech to buy now. Like all other coronavirus vaccine drugmakers, Novavax has the potential to sell more vaccines after the initial rollout completes via booster shots. If you can stomach a lot of volatility ahead, give the stock a chance.