Altria and two other flawed stocks could offset your gains this year.

The S&P 500 is hovering near all-time highs, but many individual stocks have underperformed the market this year amid concerns about rising bond yields, inflation, and post-pandemic slowdowns in certain sectors.

In this fickle market, you should check your portfolio for any potential losers. Let's take a closer look at three wobbly stocks that might offset your gains this year: Altria (MO 0.04%), Under Armour (UA 1.80%) (UAA 1.83%), and ContextLogic (WISH 1.81%). 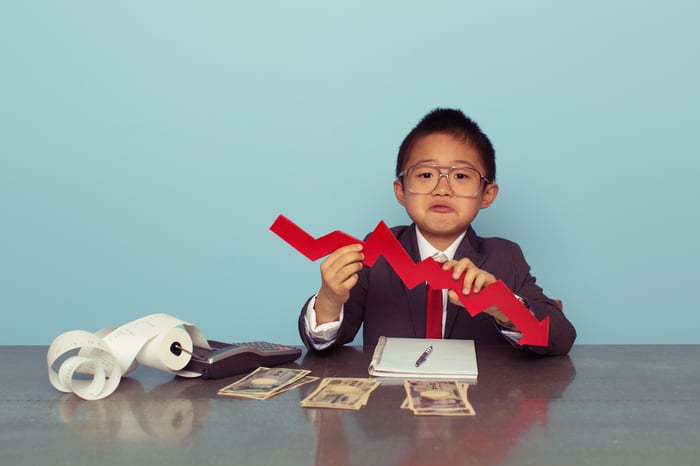 Altria is the largest tobacco company in America. Its flagship brand, Marlboro, controls more than 40% of the country's retail cigarette market. It generates most of its revenue from cigarettes, but it also sells cigars, snus, e-cigarettes, heated tobacco products, nicotine pouches, and wine.

Altria might initially seem like a stable income stock. It pays a high forward yield of nearly 7%, it's raised that payout every year since it spun off its international business as Philip Morris International in 2008, and it trades at just ten times forward earnings.

Altria underperformed the market because adult smoking rates in the U.S. are declining. To counter that secular decline, Altria raised prices, cut costs, and repurchased more shares to boost its EPS. Those strategies helped Altria tread water, but they're arguably unsustainable over the long term.

To stay relevant, Altria invested billions in the e-cigarette maker Juul and the cannabis company Cronos -- but the former caused big writedowns, and the latter hasn't generated any meaningful revenue yet.

The bulls believe Altria can eventually diversify its business away from cigarettes, but I'm not as optimistic. Investors should stick with dividend stocks with more balanced business models instead.

Under Armour's stock has risen about 30% this year as the athletic footwear and apparel maker's fundamentals have gradually improved after weathering the pandemic. But if we pull back the chart, we'll notice UA's stock has still lost nearly 40% of its value over the past five years.

UA was once called the "next Nike", but a series of missteps torpedoed its business. Its founder and former CEO Kevin Plank, who stepped down in 2019, expanded UA into fitness trackers and mobile apps, but couldn't keep pace with Nike and Adidas' direct-to-consumer expansion strategies.

The bankruptcy of Sports Authority in 2016 exacerbated that pressure by flooding wholesale channels with cheap UA products, and its flagship Curry shoes experienced diminishing returns. It broadly missed its three-year target of generating $7.5 billion in revenue by 2018, and its double-digit revenue growth decelerated to low single-digit levels as its core North American business withered.

Other mishaps -- including Plank's praise of former President Trump, reports of a toxic work environment, and an accounting scandal -- further tarnished UA's reputation with its customers and investors.

UA has taken some steps in the right direction over the past year. It boosted its gross margin by improving its supply chain and product mix, launched new high-end products, and stabilized its North American business. But I believe UA's challenges are far from over, especially as Nike and Adidas recover, and both classes of its stock still look expensive at more than 40 times forward earnings.

ContextLogic, which operates a discount e-commerce marketplace Wish, went public at $24 per share last December. But the stock subsequently tumbled to about $8 as investors spotted three glaring problems.

First, Wish's revenue rose 34% in 2020, but it grew at a slower rate than that of bigger e-commerce companies like Amazon and Shopify. Analysts expect Wish's revenue to rise just 24% this year -- which makes it an underdog with decelerating growth in a saturated market.

Second, most of Wish's merchants are in China, which exposes it to rising tariffs and trade tensions. Its shoppers have also repeatedly complained about counterfeit goods, long shipping times, and difficult returns. Lastly, Wish is deeply unprofitable: its net losses widened in 2020 and the first quarter of 2021, and analysts don't expect it to generate a profit anytime soon.

Wish serves more than 100 million monthly active users (MAUs) in over 100 countries, but its shoppers are spread too thinly worldwide. Its high logistics costs and overwhelming dependence on discounts and flash sales could also prevent it from narrowing its losses.

Wish trades at less than two times this year's sales, but that discount is deserved. Investors looking for a similar play with more growth potential should take a closer look at the Chinese discount e-commerce company Pinduoduo instead.

Is ContextLogic a Meme Stock That Will Grant Your Wish?