Please ensure Javascript is enabled for purposes of website accessibility
Log In Help Join The Motley Fool
Free Article Join Over 1 Million Premium Members And Get More In-Depth Stock Guidance and Research
By Alex Carchidi - Jun 9, 2021 at 6:47AM

It'll cover a lot of ground in the next 14 years.

Between its laboratory-ready gene sequencing instruments for research use and its high-throughput equipment for hospitals and diagnostics providers, Illumina (ILMN -3.10%) is one of the most essential companies in the entire healthcare sector. If you've ever had your DNA sequenced, I'd bet $20 that your samples passed through one of the company's ubiquitous sequencing machines.

Given that seeing or using its hardware is practically unavoidable in the biopharma sector, it's reasonable to suspect that Illumina could become a giga-cap company in the (distant) future. As long as it maintains its power position in the gene sequencing market, it might even be possible for it to become a trillion-dollar stock. But don't invest your life savings just yet. Illumina will continue to be a juggernaut in the coming decades, but will take quite a while to reach trillion-dollar heights. 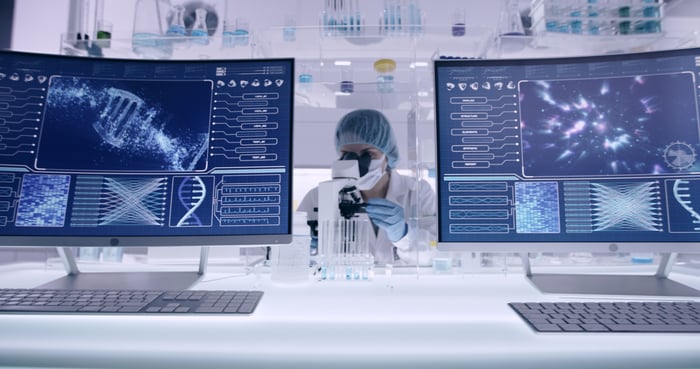 How much would the stock need to grow?

Let's start with some basic math. Right now, the company has a market cap that's just over $59 billion. For it to reach $1 trillion, it would need to grow by just under 17 times its current value, or nearly 1,700%. The year 2035 is 14 years from now. If we look back to 2008, 13 years and a few months ago, we can see that Illumina's market cap has grown roughly 1,700% since then. Between the rapidly evolving pace of sequencing technology and the growth of the biotechnology industry, it's at least within the realm of possibility for the market to believe that the company has huge prospects for its future earnings.

Of course, it's much easier to grow from a few hundred million in market cap to $1 billion than it will be for the company to grow to reach $1 trillion from where it is today. While it's true that Illumina's products are ubiquitous in biopharma and healthcare systems, it's hard to imagine gene sequencers ever being as popular as something produced by a $1 trillion company like Apple. Plus, the exact economic conditions that enabled Illumina to grow so much in the past won't remain the same through 2035. To cap it off, it's important to remember that no company in the healthcare sector has reached a market cap of even $500 billion to date.

What about its revenue and valuation?

Over the past 10 years, Illumina's quarterly revenue has risen by just over 280%. Per its latest earnings report, quarterly revenue grew by 27.2% year over year. That's rapid growth for a company of its size, and it's likely that it won't be able to maintain that growth rate through 2035. In fact, from 2010 to 2020, the compound annual growth rate (CAGR) for its annual revenue was only 13.64%. If we start with its 2020 total revenue of $3.23 billion and assume that number continues to expand at the historical rate for the next 14 years, Illumina will be making roughly $19.4 billion per year. 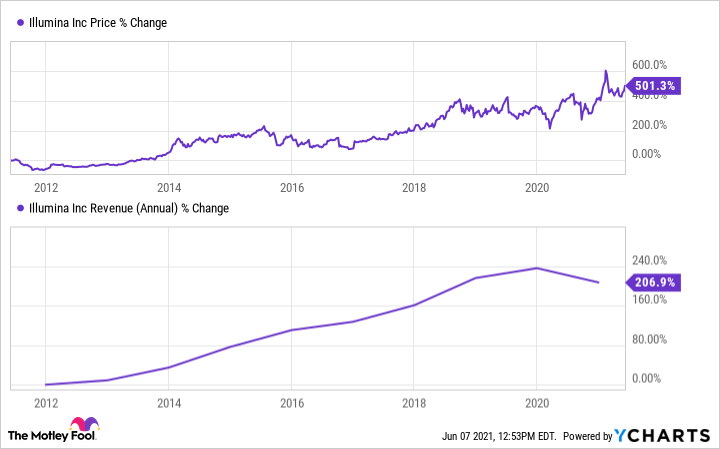 Now, with a little valuation magic, we can see what its market cap might be at that level of revenue. Illumina's trailing price-to-sales (P/S) ratio is currently 17.26, and there are 146 million shares outstanding. If the market's appraisal of the stock's future value remains just as favorable over time (keeping the P/S ratio the same as it is now) and no new shares are issued, we can find that the value of all outstanding stocks will be about $334.84 billion if its revenues are $19.4 billion in 2035.

That's not half bad, if you're a shareholder. But it's nowhere near $1 trillion. And it's likely an overestimate, as in the past decade Illumina's P/S ratio has been significantly lower than its current level much of the time. Even if its valuation becomes bloated by hype -- which is unlikely at this point, given that it's a mature company -- it wouldn't be enough. So while Illumina is a successful and profitable company that's worth paying attention to and potentially investing in, even its consistently expanding revenue won't be enough to send it to $1 trillion in market cap by 2035.

If you're ready to wait the 29 years until 2050, however, you might find Illumina in the trillion-dollar club of stocks, assuming that it keeps growing at the current long-term rate and its P/S ratio stays roughly the same.