Please ensure Javascript is enabled for purposes of website accessibility
Log In Help Join The Motley Fool
Free Article Join Over 1 Million Premium Members And Get More In-Depth Stock Guidance and Research
By Rekha Khandelwal – Jun 17, 2021 at 7:47AM

You should see some Lucid Airs on the road in 2022, but which direction the luxury electric vehicle company will be heading in at that point is far from clear.

Lucid Motors is preparing to launch its first all-electric luxury sedan, which it says will offer a longer battery range and better performance than the Tesla (TSLA -1.10%) Model S. The upstart automaker, which plans to go public late next month through a merger with special purpose acquisition company (SPAC) Churchill Capital IV (CCIV), believes that it will be able to produce luxury vehicles without compromising on performance, technology, or environmental friendliness.

That sounds like the best of all automotive worlds -- if Lucid Motors can deliver what it's promising. But what should investors be expecting from the company over the next 12 months?

Management says the automaker will start commercial deliveries of its cars this year. Its flagship model, the Lucid Air, has a starting price of $77,400, and a range of more than 500 miles, compared to the 412 miles offered by Tesla's Model S Long Range. 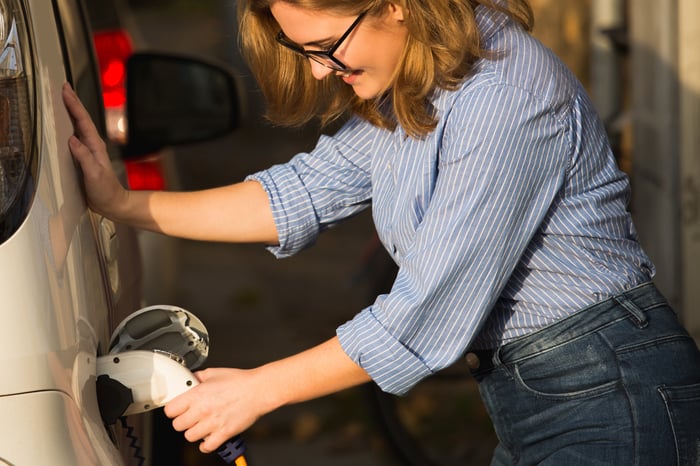 According to the company, its manufacturing plant in Casa Grande, Arizona, has an annual production capacity of 34,000 vehicles, but it plans to deliver fewer than 1,000 in 2021. However, it forecasts that it will deliver 20,000 cars in 2022. Based on that, a year from now, the company should have sold around 10,000 cars.

The company has certain strengths that could help it in achieving its objectives -- first and foremost among them, its management team. CEO Peter Rawlinson was formerly the chief vehicle engineer of the Tesla Model S. Indeed, Lucid Motors' leadership team is full of ex-Tesla executives, as well as professionals from an array of top auto and technology companies. Experienced management is crucial for any new company that hopes to make good in a segment like this one, which has high barriers to entry, requires huge capital investments, and has complex manufacturing processes. And that's not even addressing its most ambitious goal -- delivering a better product than the market leaders do.

Second on Lucid's list of strengths is that it has spent plenty of time laying the groundwork. The Lucid Air is backed by more than 10 years of research and design work, and the company has extensively tested its technology and batteries for range and performance. Third, the company has secured more than 9,000 reservations for the Lucid Air, which shows there's consumer interest in the product.

Finally, Lucid Motors is focusing on in-house manufacturing and has a robust pipeline of vehicles in development that could fuel its longer-term success.

Those pluses, however, are far from a guarantee that Lucid Motors will succeed. Though its technology looks promising, car production is not an easy task. Examples of EV start-ups hitting severe speed bumps abound: Nikola recently had troubles with its alliance with General Motors and its plans for the Badger pickup truck; Lordstown Motors is in the midst of a cash crisis; and even Tesla often missed its delivery deadlines and was close to running out of funds while ramping up production of the Model 3.

Numerous factors may delay Lucid Motors' commercial production plans. Moreover, as-yet-unforeseen issues may come up for its cars once they are in customers' hands and on the roads.

How customers respond to the company's vehicles will be one key in determining Lucid Motors' fate in the long term. But so will the actions of its many far-more-experienced rivals. The established legacy automakers are spending billions of dollars to develop their EV offerings. It will be a herculean task for Lucid to carve out a significant place for itself in so competitive a market.

Intriguing vehicles, but a high-risk investment

Considering the many challenges it will face in the production process, Lucid Motors' target of delivering 20,000 vehicles in 2022 looks ambitious. But even delivering half of that number would be an accomplishment. Additionally, if the Lucid Air lives up to the company's hype as a better luxury electric vehicle than those on the market now, the company's valuation will likely rise from its current levels. However, the stock's performance -- following the SPAC merger that will bring it public -- will likely depend on those other factors discussed above.

Based on projected sales, Lucid Motors claims to have a valuation more attractive than Tesla. But the company itself will have a lot to prove before that type of comparison can be considered valid. Until such time as it does, Lucid Motors will be suitable only for investors with a high appetite for risk.