This stock is little changed in the short time it's been on the market, but that's OK -- its opportunity is compelling.

Investors haven't been quick to snap up shares of Marqeta (MQ 4.21%) since the payment technology company had its initial public offering last week. At Friday morning's prices, it was trading just a little over its IPO price of $27 per share.

If you've been watching and waiting, you still have the same opportunity for high gains as Marqeta's private investors did. That is, of course, if you expect it to grow. And there are several reasons to be confident about Marqeta's prospects. Let's go through them.

What does Marqeta do?

Marqeta helps its clients issue their own payment cards and manage their various payment systems. It has developed an open API (application programming interface) system for backend users to easily create payment programs with unique features that suit their needs.

A traditional card payment might involve a customer and his or her bank, a merchant and its bank, and a processor in the middle that makes the transaction and takes a fee. But as financial technology has grown, it's given companies more options beyond that model, and Marqeta works with them to serve their needs. 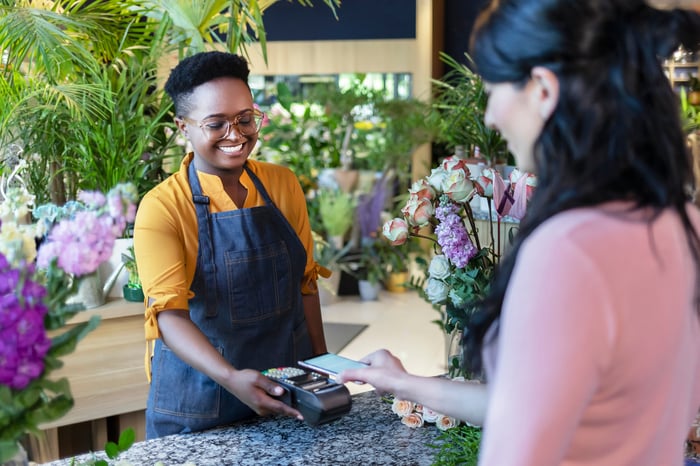 For example, Marqeta's biggest client is Square, which uses Marqeta's framework to provide a merchant debit card for its sellers market. Before Marqeta, Square merchants had to wait for deposits to reach their connected bank accounts -- not ideal if you run a small business and need to use that money right away. With Marqeta's setup, deposits now go instantly into their Square accounts. Marqeta services also underpin many of Square's Cash App processes, such as the Cash App card.

But Marqeta doesn't just serve consumers. Sometimes the payment options are related to internal operations, such as DoorDash drivers paying for food they pick up at partner restaurants. Another example is buy-now-pay-later, which requires breaking up a charge into parts and holding the payment over a period of time -- and this is how Marqeta serves European fintech Klarna.

Marqeta sees itself as part of the digital revolution, and its opportunities come from disrupting the status quo. Card issuing as an industry hasn't changed much since its inception in the 1940s, and legacy systems mean that it's complicated for traditional players to change. That's where Marqeta, and its digital-first, agile infrastructure, come in.

The biggest player in the industry right now is Fiserv, which took in $3.8 billion in revenue in the first quarter. Global Payments is another large competitor, posting $2 billion in revenue in Q1. Next to them, Marqeta looks tiny at $108 million in first-quarter sales. But there's plenty of room for a new innovator. According to Marqeta, Visa estimates that global retail shopping will increase from 9% to 19% between 2016 and 2022. In 2020, Marqeta processed less than 1% of U.S. card issuer transactions, and it sees growth opportunities both in expanding transaction volume as well as its share of the total. As digital payments are exploding and people need to move money quickly and seamlessly, Marqeta is well positioned to benefit.

In 2020, revenue increased 103% over 2019, and first-quarter 2021 revenue increased 123% year over year. Q1 total payment volume increased 167%. This is important because most of Mareqeta's revenue is transaction-based, like a credit card processor; it takes a small fee from every charge, which means its revenue is connected to volume. Dollar-based net revenue retention, which measures how much new business it gets from existing customers in a given time frame, was more than 200% for both 2019 and 2020. 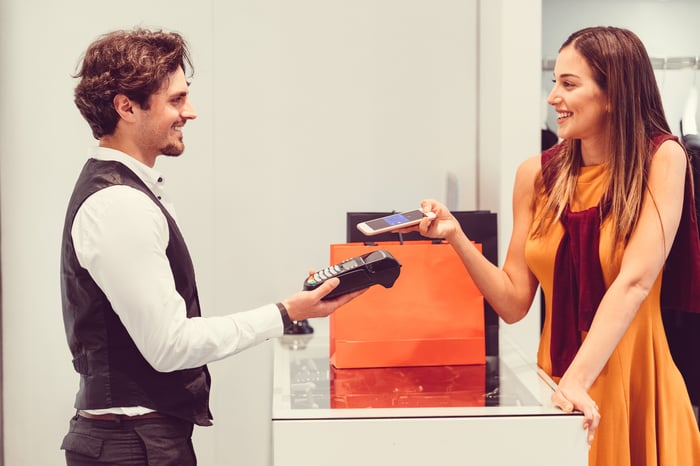 Square is Marqeta's biggest client by far, accounting for 60% of total revenue in 2019 and even more, 70%, in 2020. It also accounted for 80% of the total increase in Q1 revenue growth. Square's a growing company with a lot of sales volume on the horizon, but Marqeta's stability relies on it being able to secure other growth streams. Square's contract with Marqeta expires in 2024, so Marqeta has work to do over the next three years to keep Square happy, as well as attract new business.

It's already diversifying its customer base, and even though Square accounted for more than half of revenue, total payment volume from other sources is growing more quickly: Square TPV grew 170%, and TPV from companies other than Square grew 188% in Q1. That's moving in the right direction.

Net loss contracted from $58 million in 2019 to $48 million in 2019, but the company may continue to operate at a loss while growing. That uncertainty is what investors often trade for the opportunity to buy at a low price and see high gains. Not that shares are trading low: Shares are trading at 46 times sales, which is quite expensive. But the market is treating that as a fair price, for now.

These risks are real here, but the growth story looks compelling. If Marqeta can keep sales increasing at the rates they are now and add clients, shareholders should be rewarded. Growth-minded investors should consider adding Marqeta to their portfolios.