Please ensure Javascript is enabled for purposes of website accessibility
Log In Help Join The Motley Fool
Free Article Join Over 1 Million Premium Members And Get More In-Depth Stock Guidance and Research
By Dan Caplinger - Jun 22, 2021 at 5:05AM

Here are the companies investors are most excited about -- and why.

The Dow Jones Industrial Average (^DJI 0.23%) has had a solid year so far in 2021. Gains of 9% might not seem like all that much compared to the double-digit percentage gains we've seen in past years. But given everything that's happening in the economy, it's not surprising to see investors rein in their expectations somewhat on some of the top-performing stocks in the market.

Yet even with the gains the overall market has seen, there are still some Dow stocks that haven't climbed as far as they might. In particular, analysts looking at three stocks among the Dow Jones Industrials see the potential for substantial gains in the second half of 2021 and beyond. Below, we'll look at these three companies to see what it'll take for them to produce the big returns that investors want right now.

UnitedHealth Group (UNH 0.24%) has already put in a reasonable performance in the Dow so far this year. The health insurance giant's stock is up about 11% year to date, outpacing the broader average very slightly.

Yet investors see a lot more upside for the healthcare giant. The top price target among Wall Street analysts for UnitedHealth is $522 per share, which implies roughly a 34% gain from current levels.

UnitedHealth has done an excellent job of navigating the ever-changing landscape of the healthcare and health insurance industries. As the largest health insurance company in the world, UnitedHealth offers coverage not just for private businesses but also for those eligible for government programs like Medicare and Medicaid.

Indeed, UnitedHealth's handling of plans under the Affordable Care Act has been masterful, with the company having participated in the program better known as Obamacare while not overcommitting to it. With the Supreme Court having recently upheld the validity of the Affordable Care Act, UnitedHealth finds itself in a strong position to keep benefiting from its mix of business. 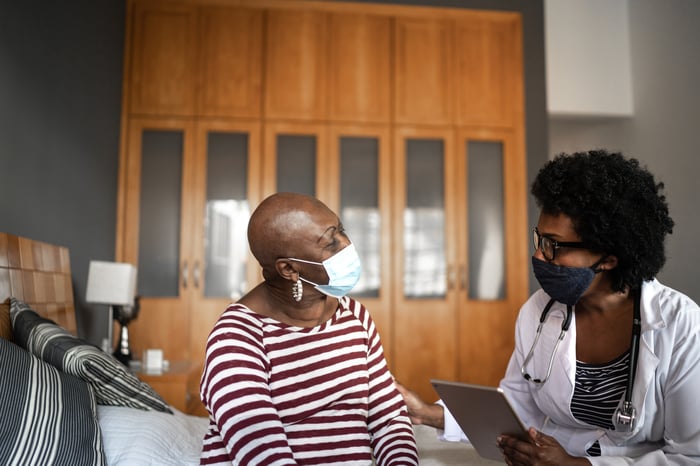 Wall Street has enjoyed the bull market in stocks, and that's been a blessing for investment bank Goldman Sachs (GS 0.84%). The perennial financial giant has seen its stock rise 34% so far in 2021 after less impressive performance during 2020.

On one hand, Goldman has reflected the broader performance of financial stocks across the market. Interest rates have generally been on the rise, and that's bolstered the prospects for more net-interest income from retail banking operations. Goldman lags behind its big-bank peers on the consumer banking front, but its relatively new Marcus unit has done a good job of attracting capital thus far.

On the other hand, Goldman continues to rely on its investment banking operations, and strong activity levels among initial public offerings and mergers and acquisitions (M&A) have fed the company's coffers nicely. Financing remains relatively easy to get, and that could spur more M&A activity that in turn could keep growing revenue for Goldman's investment banking division. Add to that possible tailwinds from macroeconomic factors, and it is in a solid position to climb as high as the $484 per share that represents the top price target among those following the financial stock.

Apple's gains have continued to impress. Revenue jumped 54% in its most recent quarter, with sales of the iPhone 12 and various other products and accessories continuing to drive sales for the company. Returning capital to shareholders via dividends and stock buybacks has had a substantial impact on financial performance, especially with the number of outstanding shares having plunged by roughly 35% in just the past decade.

Many fear that Apple hasn't generated the innovative product lines that drove its success in the mid-2000s. However, at least for now, consumers seem content with iterations on existing product lines, and as long as that remains a successful strategy, further gains for the stock seem realistic.

Even with solid gains for the Dow in 2021, the long-term trajectory for stocks remains upward. That's a big part of why Apple, Goldman Sachs, and UnitedHealth Group look as promising as they do. Smart investors should at least keep an eye on these three stocks to see if they can live up to their full potential.