Please ensure Javascript is enabled for purposes of website accessibility
Log In Help Join The Motley Fool
Free Article Join Over 1 Million Premium Members And Get More In-Depth Stock Guidance and Research
By Keith Speights - Updated Jun 24, 2021 at 11:56AM

There's no need to wait to invest in these winners.

What's the best time to invest in the most popular Robinhood stocks? It depends on the stock.

The right answer to the question for some stocks that rank on Robinhood's top 100 list is arguably never. Other stocks on the list, though, could be solid picks down the road -- but just not yet.

Are any of the top stocks smart choices for investors sooner rather than later? Absolutely. Here are three great Robinhood stocks to buy this summer. 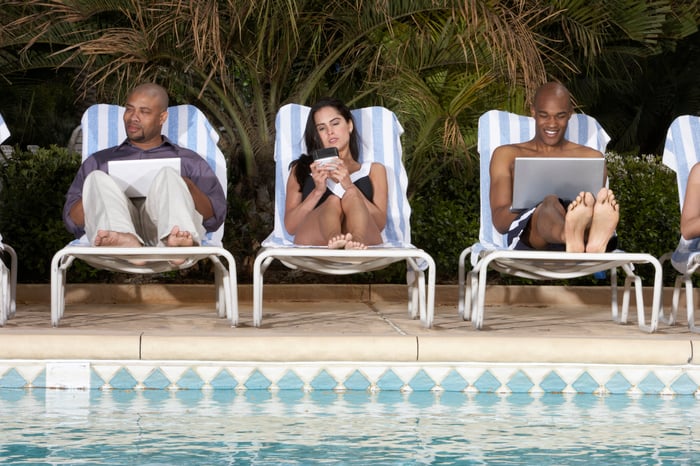 Over the last decade or so, there really hasn't been a bad time to buy shares of Apple (AAPL -0.03%). As long as you held onto the stock for at least a few months, you'd always enjoy positive returns.

Past performance is no guarantee of future results, though. However, I think there are big reasons to be bullish about Apple's prospects.

Apple's iPhone-centric ecosystem continues to expand. High-speed 5G networks are fueling demand for the company's new iPhone models. I suspect the rumors that Apple is developing a foldable iPhone will prove to be true. The more iPhones that Apple sells, the more revenue it stands to generate from the App Store, Apple Pay, AirPods, and more.

CEO Tim Cook recently stated that augmented reality (AR) is "critically important" to Apple's future. The company is already building that AR future, including a new feature with iOS 15 that embeds AR into its Maps app. I look for Apple's AR push to pay off handsomely for investors.

Apple could have some competition soon from another favorite among Robinhood investors -- Facebook (META 0.46%). The social-media giant reportedly plans to launch a smartwatch next summer.

I don't think Apple needs to tremble in its boots. However, Facebook's move shows that it's serious about targeting the device market. The devices that are more likely to make big bucks for Facebook, though, are its Oculus virtual reality (VR) headsets, especially the Quest 2 stand-alone VR headset.

Nearly one-fifth of Facebook's employees are working on AR or VR projects. If you expect AR/VR to be the next big thing in tech (as I do), Facebook is a stock that you don't want to ignore.

You also shouldn't ignore the company's core social media platform. Facebook will likely post huge revenue growth when it reports its second-quarter results. Its advertising revenue is picking up, even with Apple introducing the option for its users to opt out of tracking used in targeted ads.

No, not all of the top Robinhood stocks to buy this summer are FAANG stocks. Moderna (MRNA -4.93%) is a high-flying biotech stock that could go even higher.

The company has become a household name, thanks to the success of its COVID-19 vaccine. As of early May, Moderna projected that the vaccine would generate sales of close to $19.2 billion this year. However, the actual total will be significantly higher due to the biotech lining up additional supply deals.

Moderna's COVID-19 vaccine should be a cash cow, at least for the next couple of years. The emergence of new coronavirus variants could fuel recurring demand throughout the rest of the decade and beyond, though.

For long-term investors, the main reason to consider buying Moderna is its pipeline. The company currently has 13 other programs in clinical testing and plans to significantly increase that number.

Moderna's management has long believed that if its messenger RNA (mRNA) technology works well with one disease, it can work with many others. The biotech needs only a few successes to continue delivering impressive returns.