Please ensure Javascript is enabled for purposes of website accessibility
Log In Help Join The Motley Fool
Free Article Join Over 1 Million Premium Members And Get More In-Depth Stock Guidance and Research
By Jason Hawthorne - Jun 26, 2021 at 7:38AM

Just because the stock has had a massive run doesn't mean its biggest gains are behind it.

It's natural to think that it's too late to buy a stock that has increased a lot in value. But often, companies that are succeeding gain advantages that help them keep outperforming peers. This is illustrated by the best-performing healthcare stocks of the 2010s. Despite posting outrageous gains, they still outperformed the S&P 500 index in the 18 months since. Of the top 10, they have averaged a 39% return compared to 32% for the broader index.

Cassava Sciences (SAVA -1.13%) is having a year to remember. The stock is up 1,100% so far in 2021. The excitement is about simufilam -- its possible treatment for Alzheimer's -- and the Food and Drug Administration's (FDA) recent approval of Biogen's (BIIB 0.63%) Aduhelm. Wall Street is taking positive data from Cassava's phase 2 trial and anticipating a possible drug approval in the years ahead. With so much optimism seemingly baked in, investors might be wondering if most of the gains are in the past or if the stock has more room to run. 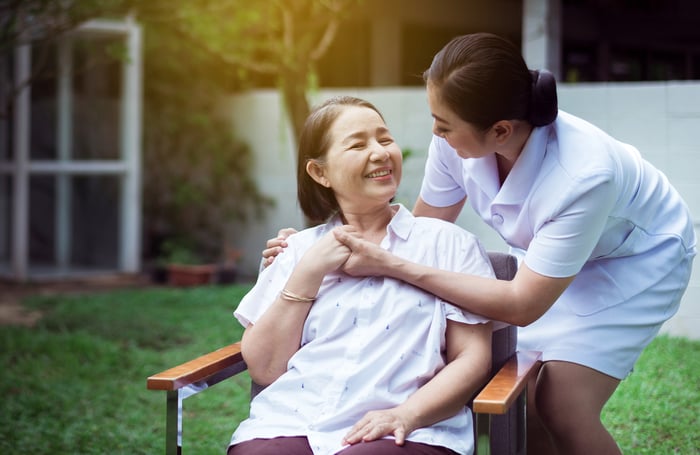 Biogen's controversial drug -- it was approved despite mixed results and an expert panel's recommendation against it --- binds to a protein that clumps in the brain. The clumps lead to the amyloid plaques that have become synonymous with Alzheimer's disease. Other drugs have targeted these plaques, and some have even succeeded in reducing them. Unfortunately, even those have found limited evidence of improving the true measures of health -- cognition and reasoning. Other companies continue taking this traditional approach.

Like Biogen's Aduhelm, Eli Lilly's donanemab targets the amyloid plaque in the brain of patients. In a phase 2 trial, it claimed to slow cognitive decline by ridding the brain of those plaques. The company will file for accelerated approval sometime in 2021. Similarly, Roche Holdings has a drug -- gantenerumab -- that has been shown to reduce the plaques. It is currently running two phase 2 trials.

Cassava's CEO believes its drug is the first to show it can actually improve the things that matter. It is doing it by targeting a different protein. Simufilam is designed to restore the normal shape and function of a protein called filamin A. The company has an ongoing phase 2 study that reported results for the first 50 patients who completed a six-month regimen. Without a control arm to study placebo effects, it's hard to claim success. However, the company did report improvements in both a cognition test and a dementia-related behavior assessment. As exciting as that is, Cassava has another way to succeed in the war on Alzheimer's.

Another way to win

SavaDx is a blood test to look for biomarkers of Alzheimer's at an early stage. One of the little-discussed elements of all of the treatments in the news is that benefits are only seen -- if at all -- in patients before they experience a significant decline in health. Management claims the test is able to detect biomarkers of the disease before symptoms are present -- perhaps even a decade or more. It will present clinical results at the Alzheimer's Association International Conference (AAIC) at the end of July. If successful, the company's test could be the most important part of managing the disease in the future no matter which company's drug proves most effective.

Could the best be yet to come?

Either way, management admits  a silver bullet for treating the disease isn't likely. Similar to the drug cocktails taken by HIV patients, people with Alzheimer's may be on a regimen of treatments targeting multiple proteins, as well as antidepressants or anti-psychosis drugs. Even as part of a cocktail, a successful drug would be a blockbuster. At least one analyst estimates that Alzheimer's drugs could constitute a $200 billion market over the next 15 years. With Cassava having a mere $3.3 billion market cap, its stock's biggest gains might still lie ahead.

CEO Remi Barbier certainly thinks so, stating, "I know the science, I know the data, I know the disease and this stuff looks promising and I'm putting my money where my mouth is." His 5% stake in the company is currently worth $165 million. As with all biotechs, clinical trial results are likely to produce wild swings in Cassava's stock price. But for investors willing to take that risk on a unique approach to treating a dreaded disease, the reward could be worth it.