Please ensure Javascript is enabled for purposes of website accessibility
Log In Help Join The Motley Fool
Free Article Join Over 1 Million Premium Members And Get More In-Depth Stock Guidance and Research
By Rhian Hunt – Updated Aug 2, 2021 at 11:48AM

Mondelez International (MDLZ 0.03%), the parent of familiar snack food brands Triscuit, Jell-O, Toblerone, and Oreo, beat analyst expectations at both the top and bottom lines with its July 27 second-quarter 2021 earnings report. The company continues to pursue a strategy of opportunistic mergers and acquisitions (M&A), snapping up growing European cake and roll manufacturer Chipita as its latest major move.

Matters look sweet and savory for Mondelez short term, but the question remains of whether its string of successes can continue. Here are four points to consider when mulling over the company's long-term bull case.

Revenue shot up 12.4% year over year for Q2 2021, driven by "strength across the vast majority of our geographies, categories, and brands," said CEO Dirk Van de Put. Bottom-line, diluted earnings per share (EPS) soared 100% year over year to $0.76, though adjusted EPS rose only 1.6% from Q2 2020, to $0.66. Organic net revenue rose 6.2% and is guided to increase by 4% for the full year, a boost from the Q1 guidance. The company also worked to improve shareholder value, increasing its quarterly dividend by 11%, and buying back almost $1.5 billion in shares during the year's first six months. 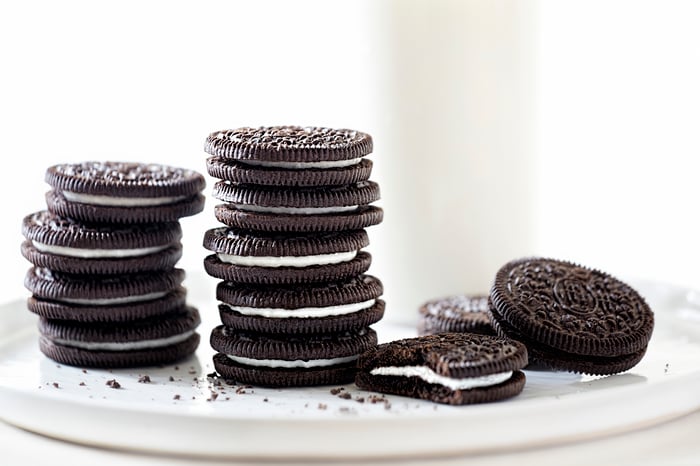 While free cash flow is also growing, the company's cash and cash equivalents have dropped from $3.62 billion on Dec. 31, 2020 to $1.94 billion at the end of Q2. This change is driven by acquisitions, but Mondelez says it is also loaning money to pay for its latest purchase, Chipita. Long-term debt remains quite high at $17 billion, nearly unchanged since the end of last year.

Though there are a few metrics like debt that might cause concern, Mondelez looks to be growing rapidly while doing its best to improve the investments of its stockholders.

Back in late May, Mondelez sealed the deal on a $2 billion acquisition of European baked snacks maker Chipita, a company with a strong presence in Eastern and Central Europe. The purchase gives Mondelez an extended geographic presence, $580 million in revenue, high single-digit sales growth, and 13 production facilities. The company expects its new subsidiary to be "immediately accretive to earnings per share ... based on comprehensive synergies" once the acquisition closes.

Van de Put said he expects Chipita to be "a strong strategic complement to our existing portfolio and future growth ambitions in Europe and beyond." During the Q2 earnings conference call, he added that the acquisition puts Mondelez in the "No. 3 position" in packaged cakes and pastries, which he asserts is a $65 billion market where the company hasn't previously been highly competitive. In all, he said Mondelez has bought out seven companies since 2018 (including Chipita) and added $1.5 billion in revenue through these acquisitions.

Triggered by the COVID-19 lockdowns and pandemic anxiety, Americans increased their snacking in March 2020, driving sector sales and stock market gains. The trend continues in mid-2021, boosting sales of convenience foods and the market performance of the enterprises making them.

The snacking boost obviously helps Mondelez, though the company's latest acquisition, a fairly traditional cookie maker, highlights that it may be focusing too strongly on familiar sectors rather than looking to the freshest trends. Food & Beverage Insider said last year 51% of purchasers are choosing low-sugar snacks with plenty of protein over less healthy snack foods. Other sources confirm that people are seeking plant-based snacks, though "indulgent" foods like cookies and chocolates have seen sales gains too.

Mondelez's strategy is aligned in general with the rise of snack and comfort food purchases, but it seems to be engaging weakly with some newer trends. Out of the four snack company acquisitions made this year, only one, the vegan, paleo-friendly Hu Master Holdings (a 100% buyout announced on Jan. 5), is primarily a maker of healthier snack foods.

The most recent buyout, Chipita, is profitable but mostly offers packaged cakes, biscuits, rolls, potato chips, and other traditional snacks far removed from health food. The acquisition of Grenade, a U.K. protein bar company, gives Mondelez a foothold in the protein snack market, but its new subsidiary's products mostly use whey or milk protein, once again missing out plant-based protein sales and vegan or vegetarian sales.

While Mondelez's acquisitions are undoubtedly boosting revenue and broadening its range of available products, it may be missing an opportunity in plant-based protein snacks, vegan snacks, and other health-conscious convenience foods, where changing consumer preferences are driving significant growth.

4. The future of snacking remains uncertain

With COVID-19 lockdowns only a few months in the rearview mirror, it's perhaps unsurprising that snack food purchases are still elevated. If the situation returns more to the pre-pandemic normal, it's uncertain whether snacking will stay elevated as vaccination rates rise and other avenues of entertainment reopen. However, with the Center for Disease Control now saying vaccinated people can become infected with the Delta variant of COVID-19 and then transmit it to others, the drivers of the original snacking surge might be poised to return regardless.

A positive development for Mondelez in general snack food sector conditions is the ongoing e-commerce revolution. According to a report by Food Processing magazine, the owner of public relations agency Avana Creative said ready access to the internet "has given emerging brands a lower barrier to entry," with new snack makers able to "open a website and start selling online quickly and have access to more consumers" rather than needing the immense capital to buy supermarket shelf space or open their own outlets.

This is good news for Mondelez because it should encourage many snack start-ups, giving it a wide field of possible acquisitions from which it can pick the most successful.

What does the future have in store for Mondelez?

Overall, the situation is looking upbeat for Mondelez's long-term prospects, with a few cautionary caveats. On the plus side of the ledger, it's generating revenue and earnings growth, increasing its dividend, making apparently high-quality acquisitions, and is operating in a successful, expanding market showing no current signs of slowing down. If there's a COVID-19 resurgence because of the Delta variant or others, the company could get a boost from snacking popularity rising further as people seek relief from lockdown tedium.

On the minus side, there are a few items weighing on Mondelez's outlook, though none of them are as significant as its advantages. It is carrying a lot of debt and has seen its cash reserves drop sharply over the past year, leaving fewer resources for more acquisitions or internal investments. It seems to be mostly overlooking the plant-based protein snack and healthier eating side of the snack market for the time being, despite strong demand growth. There is also uncertainty about future growth of the snack and convenience food market as a whole if restaurant attendance returns full-blast.

Considering snack food sales appear to be holding strong even with most lockdowns and other restrictions removed, a bullish long-term outcome looks to be in the cards for Mondelez. Even if convenience food purchases slow, Mondelez has used its profits to diversify its brands and offerings and improve share value for investors, likely leading to mild or moderate long-term growth. If consumers continue snacking heavily, even better gains can be expected for those investing in food stocks who choose to back Mondelez.