Big businesses are creating and acquiring their way into the "buy now, pay later" space to capture their share of this growth trend. Even after a recent uptick, fintech company Affirm (AFRM -11.08%) is down almost 55% from its highs after going public in January. While some investors are afraid of the competition in the space, here are three reasons why you should be excited about Affirm.

Credit cards have long been the preferred tool of consumer credit, so the emergence of buy now, pay later (BNPL) hasn't quite caught on with the market yet. However, credit card revenues have peaked and declined since 2016, while BNPL continues to grow rapidly, estimated to achieve $680 billion in transaction volume by 2025.

Over the past year, several major companies have entered the BNPL space, including: 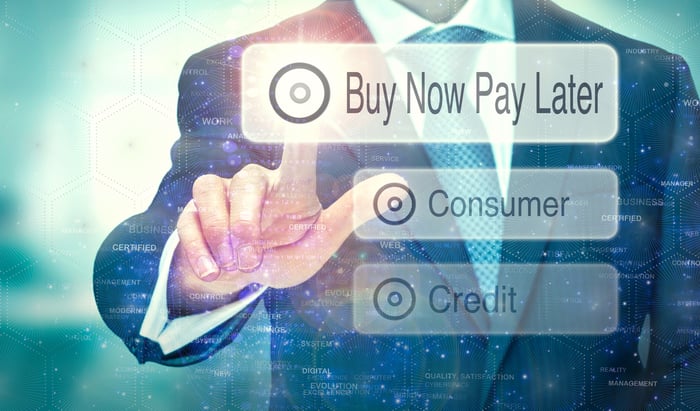 However, investors could instead look at the competitors entering the market as a sign that BNPL is a legitimate growth trend. Credit card companies hauled in $163 billion in 2016, including interest, late charges, and membership fees. BNPL offers consumers the ability to pay over several installments, often interest-free and with no late charges. BNPL companies make much of their money from working with merchants rather than imposing finance charges and charging consumers interest.

Affirm is one of the original BNPL companies, but the stock has faded from its highs on fears that the BNPL business is too competitive and that Affirm will be unable to stand out in an increasingly crowded room.

So why would merchants work with a company like Affirm? While Affirm provides beneficial financial products to consumers, it works as a lead generator for the merchants it partners with. Affirm collects data on its customers and provides insights to merchants, as well as sponsored promotions and services like product discovery that increase customers' chances of purchasing.

Building relationships with strong merchants helps Affirm grow its competitive advantage. The company is partnered with Shopify as its exclusive BNPL provider, and Shopify is rolling out its installment plan to the majority of the merchants on its platform.

Affirm also has merchant relationships with Peloton, Walmart, Expedia, Callaway, Stub Hub, and many more. Because the company partners with brands, Affirm almost functions like an e-commerce platform that resells other companies' products. Affirm's platform currently has 5.3 million active users as of 2021 Q3, a 60% year-over-year increase. Having more brands will draw more users, drawing bigger and better brands, and so forth.

3. Plenty of room to keep growing

The business did just $4.6 billion worth of transactions on its platform (gross merchandise volume, or GMV) in the fiscal year 2020, and Affirm currently operates just in the U.S. but plans to expand. There is a long runway for growth ahead; the company's GMV represents less than 1% of the $600 billion in annual e-commerce sales in the US. There is a total of $3.4 trillion in global e-commerce, which will only grow as more retail shifts online.

Investors will need to monitor the competitive presence in the space, but many of Affirm's competitors, such as Apple and Square, are tying BNPL services to their own ecosystem. Affirm represents a pure play, a dedicated brand approaching the consumer as a buy now, pay later business.

If Affirm can keep partnering with strong merchants and bringing new members onto its platform, the addressable market is large enough for multiple winners to emerge.

Buy now, pay later is a new industry, and investors are grappling with how to invest in it and determine who the big players will be -- and this can make investors prone to overreaction. Affirm has gotten caught up in the competitive conversation, and the size of an Apple or a PayPal has spooked investor sentiment around Affirm.

Affirm is growing its platform as a dedicated BNPL company. As long as the growth continues over the upcoming quarters, investors may begin to realize that Affirm could be sticking around. If that happens, patient investors could be looking back at the recent dip as a big opportunity.