They are coming off strong quarters, yet appear to be underpriced based on their fundamentals. Is now a good time to buy?

Everyone loves a bargain, and investors certainly aren't immune to that desire. However, there's a difference between cheap and underpriced stocks. "Cheap" is in the eye of the beholder. An underpriced stock, though, is one that has a lower share price than its fundamentals say it should.

Three such stocks that fit in the latter category, all of which are connected in some way to diagnostic testing, are Quest Diagnostics (DGX -1.41%), Hologic (HOLX -0.64%), and Bio-Rad Laboratories (BIO 0.24%). 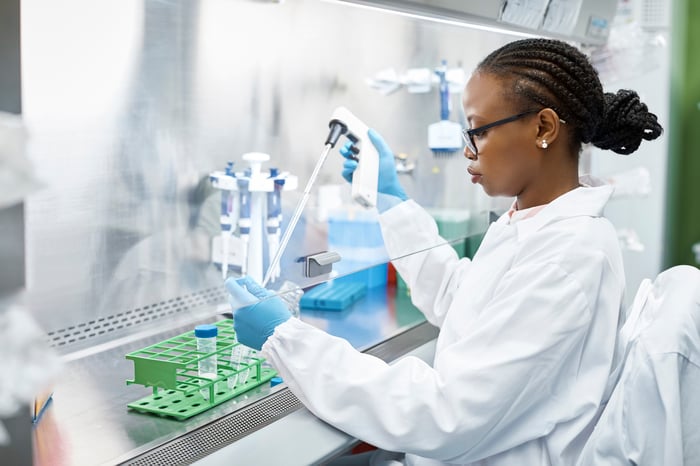 Try Quest Diagnostics if you're seeking a deal

Quest Diagnostics is the world's largest provider of medical diagnostic services. Basically, if your physician requests bloodwork on you, the chances are pretty good (one in three, according to Quest) that the company will analyze the test.

The stock us up more than 23% for the year, yet its price-to-earnings (P/E) ratio is a miserly 8.7. This is for a company that has three years of revenue growth, including last year, when a lot of medical tests were deferred.

Quest just reported its second-quarter earnings, and through the first six months of the year it had revenue of $5.3 billion, up 44% year over year. Net income jumped a reported 284% to $1.1 billion through six months. The company said in its outlook that it expects to have yearly revenue this year between $9.54 billion and $9.79 billion, compared to $9.4 billion in 2020.

The reason Quest's stock isn't higher -- along with its P/E ratio -- is investors are concerned that once the pandemic ebbs, the need for COVID-19 testing will subside. That has been a revenue driver for more than a year for Quest. However, the delta variant's spread shows that the need for COVID-19 testing may likely remain steady or even increase, at least through the end of the year as businesses and schools increase testing requirements for employees and students to return.

Looking past that, as the pandemic eases, more typical medical procedures and testing will likely pick up. Quest has been a consistent stock whose total return has outperformed the S&P 500 Healthcare and Equipment Services Index three of the past five years, including last year.

Hologic focuses on women's health through the early detection of cervical, sexual, and vaginal issues. The company operates in four segments: breast health, diagnostics, GYN surgical, and skeletal health, and makes a variety of diagnostic, detection, and surgical products, from assays to mammography systems and radiographs. The company's stock is up over 4% for the year, but despite that, it has a P/E ratio of only 9.7.

Like Quest, Hologic is active in COVID-19 testing but according to Hologic CEO Steve MacMillan, it has seen an upswing in more traditional healthcare procedures.

In the third quarter, the company reported revenue of $1.17 billion, up 42% year over year, and earnings per share of $1.04, up 96.2% compared to the third quarter in 2020. While diagnostics, the segment that includes revenue from Hologic's COVID-19 assays, was up 25%, the growth in the other segments was more pronounced. GYN surgical was up 148.4%, skeletal health grew 70.4%, and breast health was up 55.8%. All three of those groups are bouncing back after being slowed by the pandemic last year.

Bio-Rad stock is up more than 29% for the year, but even with that growth, its P/E ratio is a tiny 5.6. The life science research and clinical diagnostics company's stock has grown annual revenue for five consecutive years, giving investors a total return of 410.6% over that period.

Bio-Rad has diagnostic tests for nearly everything, from veterinary care to food-borne pathogens and CRISPR gene-editing kits.

Bio-Rad's revenue streams are diverse. Chief Financial Officer Ilan Daskal, on the company's second-quarter earnings call, said that it made $68 million from COVID-19 testing in the quarter, which represented about 9.5% of its total revenue.

The one downside in the quarterly report was that net income of $914.1 million was down from $966.4 million in the same period in 2020. That drop was related to changes in the company's Sartorius holdings, management said. Taking a further look back at the company's comparative six-month numbers, the company reported $1.89 billion in net income compared to $1.65 billion the year before. 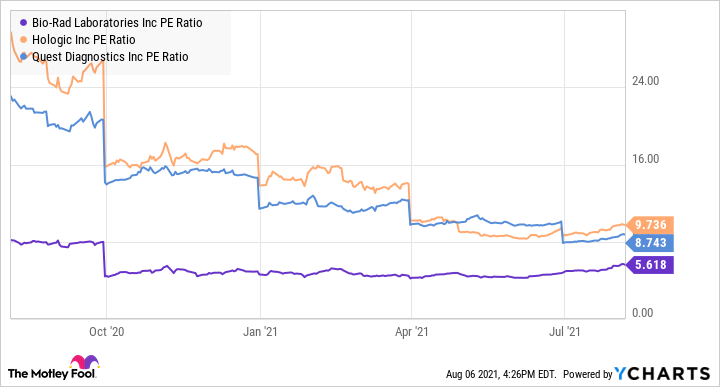 Of the three healthcare stocks, Bio-Rad's low valuation, diversity beyond COVID-19 testing, and history of total return growth make it the most enticing stock for me. But in reality, all three stocks should do well as things reopen as none of them are too dependent on COVID-19 testing. Quest's sheer size gives it some advantages of scale and its lower multiple gives it the edge to me over Hologic, though that company has the longest track record of revenue increases.