Investors are nervous about the company's long-term ability to create shareholder value.

Shares of medical-imaging company Nano-X Imaging (NNOX -6.67%), commonly referred to as Nanox, plunged on Tuesday following the release of financial results for the second quarter of 2021. The company's net loss widened significantly compared to the previous year, but it's doubtful that this is the reason the stock sold off. Rather, the company also announced a shuffling with the management team which tends to make investors jumpy. Moreover, Nanox announced two acquisitions that will be funded with stock, perhaps contributing to today's pullback. 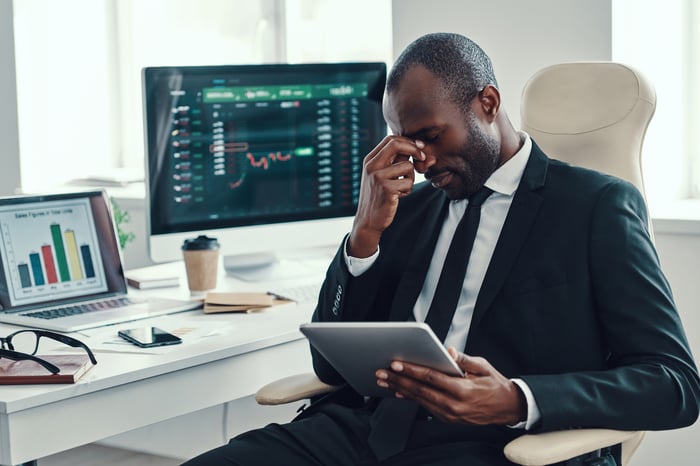 Nanox is a pre-revenue company. In June, the company submitted its primary medical-imaging device -- the multi-source Nanox.ARC -- for approval from the U.S. Food and Drug Administration, but is still waiting on that. Because it's still pre-revenue, its net loss of $13.6 million (more than double last year's net loss) isn't all that surprising. It has to spend money now to prepare for its anticipated future business. Speaking of which, in today's press release, management reiterated its goal of having 15,000 multi-source Nanox.ARC machines deployed by the end of 2024.

However, Nanox management appears to have aspirations beyond just the multi-source Nanox.ARC. Today, the company announced it's acquiring two other businesses to help it build "a globally connected end-to-end radiology solution and population health platform." The first acquisition could cost up to $200 million for a company named Zebra Medical Imaging -- a company that uses artificial intelligence to find patterns in medical images and detect health problems early. The other acquisition is USARAD for up to $30 million, which comes with 300 certified radiologists.

These acquisitions are largely funded with Nanox stock, which is likely a drag on shares today. Investors are probably also biting their nails over the management shuffle. Current CEO Ran Poliakine will step into just an executive chairman role, while current board member Erez Meltzer takes the reins. Additionally, CFO Itzhak Maayan is being replaced by Ran Daniel by September. Sometimes a management shuffle like this is a signal of internal struggles -- but not always. Either way, it's undoubtedly made at least a few shareholders nervous and explains the 10% drop.

Right now, an investing thesis in Nanox stock remains unchanged: This company needs FDA approval of its multi-source Nanox.ARC so it can begin production and commercialization. Only then can it really build a global radiology platform that can reward shareholders. That's still going to take time and money. But the company has plenty of both considering its current cash-burn rate and its cash, cash equivalents, and marketable securities of $193.4 million.

Looking further ahead, I think Nanox's acquisitions truly make this an intriguing company if it executes on its vision. In just a few years it could have 15,000 machines taking multiple images per day, giving the company an exceedingly large data set. That's where Zebra Medical Imaging and USARAD could really help Nanox derive actionable insights, improving healthcare around the world. It won't happen overnight and a lot could go wrong between now and then. But for now, the vision is exciting.