Higher prices drop straight to the bottom line for this timberland REIT with a focus on wood products manufacturing.

If you have visited one of the big-box stores to work on a home improvement project, you probably noticed that lumber is a lot more expensive than it used to be. The chart for lumber prices in 2021 has looked more like the chart for a tech stock, as COVID-19 related supply bottlenecks paired with increased demand created shortages.

The increase in lumber prices has directly benefited the biggest owner of timberland in North America, Weyerhaeuser (WY 2.99%). As a result, investors might find themselves receiving a handsome dividend early next year. 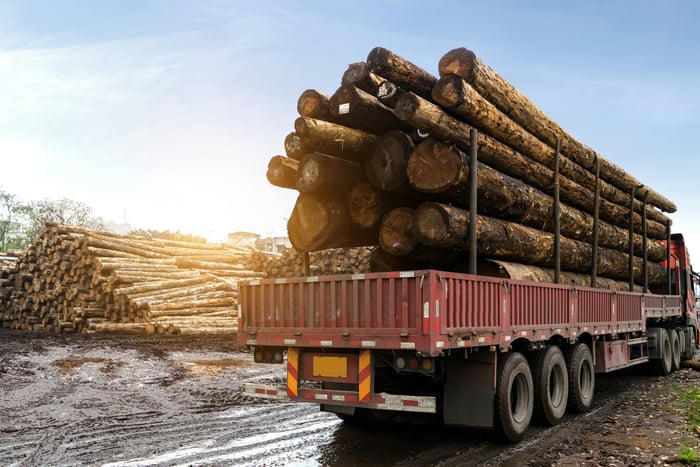 Weyerhaeuser is highly leveraged to the housing economy

Weyerhaeuser is a real estate investment trust (REIT) that owns, controls, or manages nearly 25 million acres of timberland in North America. The company also is a manufacturer of wood products mainly used for residential construction. This means that its fortunes are generally going to rise and fall with the housing economy.

Over the past year, lumber as a commodity has been on a wild ride, with wholesale prices rising 150% in May before eventually returning to more realistic levels by July. Just as oil companies benefit from high oil prices, Weyerhaeuser's profits have been boosted by high lumber prices. During the second quarter, sales increased 93% compared to a year ago, and earnings before interest, taxes, depreciation, and amortization (EBITDA) increased fourfold. While revenue rose along with lumber prices, the company's costs increased at a much slower pace, which means the price increases largely dropped straight to its bottom line.

Although Weyerhaeuser is a REIT, it has a different sort of dividend structure than the typical REITs, which are generally required to pass through the vast majority of their net income to investors in order to qualify for their tax advantages. As long as REITs invest primarily in real estate or real estate debt, and distribute most of their income as dividends, they are exempt from paying corporate income taxes. While triple-net-lease REITs like Realty Income (O 1.64%) have predictable income streams, Weyerhaeuser does not.

In order to provide investors with some predictability, Weyerhaeuser changed its dividend policy to one that provides a quarterly payout that is sustainable throughout the housing cycle and can still be paid during lean years. Once a year, it will pay a variable supplemental cash dividend, which will ensure shareholders get 75% to 80% of funds available for distribution (FAD), which is a financial metric the company uses to approximate free cash flow. It is basically operating cash flow minus capital expenditures. Note that FAD is not a term that is used in generally accepted accounting principles (GAAP). It is a company-specific term.

So far this year, Weyerhaeuser has earned $1.9 billion in funds available for distribution. Its normal $0.17 per share quarterly dividend (or $0.68 annually) works out to be about $511 million if you multiply $0.68 times the 751 million shares outstanding. If the company plans on distributing 75% of its FAD, that means shareholders should get about $1.4 billion based on the first six months of the year. Subtract the cost of the quarterly dividend and shareholders are looking at a special dividend of at least $1.20 per share, and the company still has the second half of the year to work with.

Since lumber prices have returned to a level closer to normal, Weyerhaeuser shareholders shouldn't expect another six months like the first half of the year. In the company's earnings presentation, it indicated that the third quarter would be weaker than the blowout second quarter. That said, between the variable dividend (which will be paid in early 2022) and the quarterly dividend, investors are probably getting at least $2 a share in dividends, which gives the company a 5.9% dividend yield, which is much better than its "headline" yield of 2%.