It's a great company. But something's gotta give.

Let's face it... the stock market hasn't been normal -- whatever that means -- in a while. Even before the pandemic, the price-to-sales (P/S) ratio of the average stock on the S&P 500 index was 2.36. That's a lot higher than the 1.77 just before the dotcom bubble burst.

If a crash comes, it won't just be high-flying stocks of the Nasdaq composite that get crushed. That's where the company Nasdaq, Inc. (NDAQ -0.49%) comes in. It has a strong market position and excellent leadership. But history shows it isn't immune when exuberance turns to fear in the stock market. 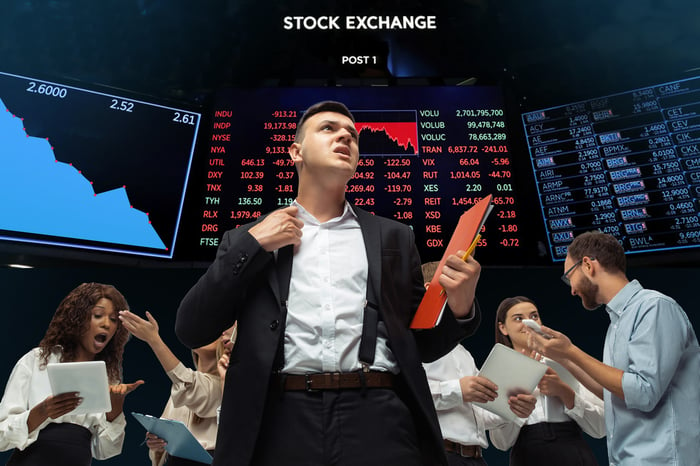 Not as diversified as it seems

The market-services segment has made up two-thirds of the company's revenue for the past decade. That's the part of the business that handles the trading of stocks, options, as well as other assets. It's primarily what the company is known for.

The corporate-platforms unit offers listing services for companies -- both public and private -- to raise capital. This is where initial public offerings and new listings are handled.

The other units are investment intelligence and market technology. The first provides data and analytics, and the latter offers marketplace infrastructure and technology. Nasdaq bolstered the latter earlier this year when it bought anti-financial crimes software provider Verafin. It's the type of adjacent market where it hopes to expand moving forward.

Although they represent four distinct business units, they are all correlated to market activity. If the market falls for an extended period, trading volume, new listings, and demand for data are likely to fall with it.

In the dotcom bust, trading volume fell 8% from 2000 to 2001, and the stock dropped more than 50% from the peak to the trough. Similarly, during the Great Recession, the number of listed companies declined, as did new listings. That contributed to a share-price collapse of 70%.

Investors may be ignoring that history. The stock currently trades at its highest multiple of sales since just before the 2008 stock market crash. 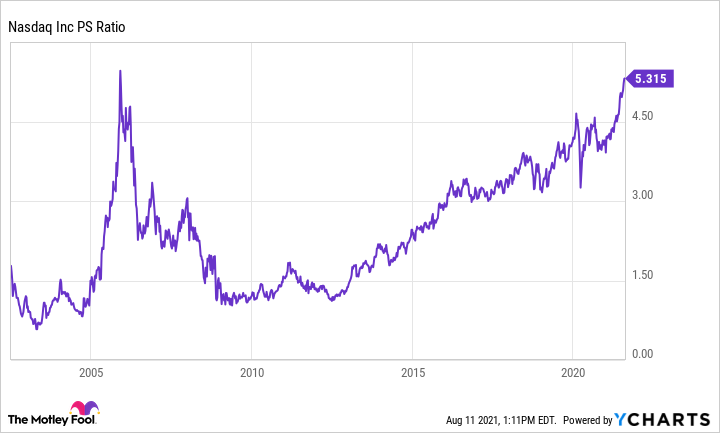 Activity is booming, but for how long?

Wall Street is sanguine because, once again, business is robust. In the first half of 2021, trading of stocks and options, as well as the listing of new companies, exploded over pre-pandemic levels.

The combination of increased unemployment insurance and stimulus checks provided the kindling. The speculative frenzy about meme stocks and special purpose acquisition companies (SPACs) brought the flame. Together, they've led to much stronger growth than the 2% it had averaged over the 10 years heading into 2020.

There are already signs that the level of activity is waning. In the company's second-quarter earnings report, revenue in the market-services segment declined 23% quarter over quarter. On the conference call, management highlighted strong numbers for the first half of the year, mostly sidestepping the sequential decline.

Sitting this one out

I would never recommend betting against the company. The stock has doubled in the past three years and is up almost 800% in the past decade. In addition, the CEO -- Adena Friedman -- spent a decade with the company leading its data products unit, overseeing several acquisitions, and serving as its chief financial officer. She then helped take the Carlyle Group public before returning to Nasdaq as the chief operating officer.

Seeing the business from all angles, including that of a customer, has likely prepared her for just about anything. But we're in unique times. And I think the stock is pricing in a market environment that isn't likely to last forever. It's a business I would love to own, but only at a much lower price.

Wall Street Is Missing Out on This Surprising SaaS Story
376%