Here's what lifting their shares.

The stock market was down at midday on Tuesday as investors seemed to react negatively to mixed data from the economy and corporate earnings. Retail sales numbers came in weaker than many economists had expected, with a shortage of cars and trucks contributing to overall figures. At shortly after noon EDT, the Dow Jones Industrial Average (^DJI 0.10%) was down 329 points to 35,297. The S&P 500 (^GSPC -0.12%) had fallen 43 points to 4,437, while the Nasdaq Composite (^IXIC -0.18%) had declined 192 points to 14,602.

Yet even as the market fell, a couple of high-growth stocks managed to post solid gains. Shareholders in both Monday.com (MNDY 1.18%) and Sea Limited (SE 0.38%) were pleased with the results their respective companies announced. Below, we'll look more closely at the numbers to see what investors were so pleased about. 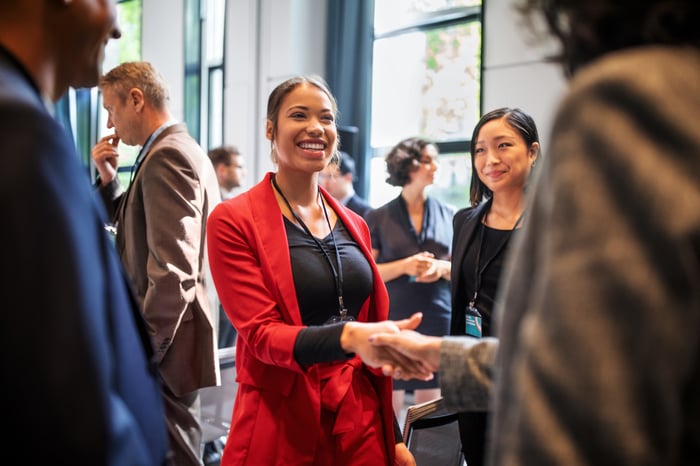 A great day for Monday

Revenue gains have been commonplace for Monday.com, and sales growth accelerated to 94% in the second quarter compared to year-ago levels. Operating losses narrowed by a third on an adjusted basis, as did per-share loss figures.

Monday.com reported attractive business metrics in other areas as well. The number of enterprise customers providing $50,000 or more in annual revenue more than tripled year over year, reaching 470. Net dollar retention rates came in above the 125% mark. The company attributed the success to its core Work OS product, and new capabilities that will enhance document collaboration efforts should lead to even greater adoption of the platform.

Monday.com sees its revenue growth staying at impressive rates, projecting roughly 75% year-over-year growth in sales both for the third quarter and for the 2021 year as a whole. If the company can make good on those promises, then shareholders could well expect Monday.com's stock to continue to soar in the months to come.

Meanwhile, shares of Sea Limited were up almost 7%. The Singapore-based e-commerce company put up some amazing numbers in its second-quarter results.

Sea also raised its guidance for the remainder of the year. In digital entertainment, Sea expects to post bookings growth of around 44%. The e-commerce business should perform even better, with projections calling for gains of more than 120% compared to year-ago levels.

It's easy for U.S. investors to focus more on what's happening closer to home in the e-commerce industry, especially with so many players finding ways to succeed in a crowded space. However, those investors willing to look internationally for opportunities have been able to find companies that they might otherwise have overlooked. Sea has done a good job of standing out in Asia, and it's poised to continue expanding in multiple directions to take maximum advantage of a booming market.

These 2 Global Stocks Are Back in Wall Street's Good Graces