As the economy bounces back, asset prices continue to see strong performance -- a good sign for these three asset managers.

Strong revenue growth was driven by solid investment performance and has boosted assets under management (AUM) at these companies significantly in the past year. Three companies posting good earnings reports in the space were BlackRock (BLK -0.39%), T. Rowe Price Group (TROW -0.87%), and StepStone Group (STEP -1.66%).

Strong earnings growth shows the strength of the economic recovery

In the most recent quarter, BlackRock saw revenue grow 32% from the same period last year to $4.8 billion, while net income was up 14% to nearly $1.4 billion. T. Rowe Price grew revenue 36% to $1.9 billion, with net income increasing 16% to $842 million. Finally, StepStone Group -- which has only been publicly traded since September 2020 -- saw management and advisory fees grow 23% to $78 million. This, coupled with better investment performance, helped give the company a net income of $126.5 million this year after a net loss of $51 million in the same quarter last year. 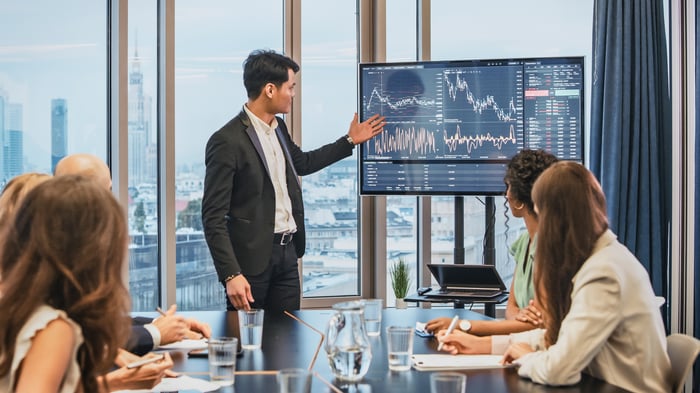 Understand why AUM is increasing

While AUM increasing is a positive sign, investors should keep an eye on how much of the performance was due to the strength of equity markets for these companies versus raising capital from investors.

For example, T. Rowe Price saw AUM increase to $1.6 trillion in the quarter, up 33% from last year and 7% from the most recent quarter. However, AUM growth came from gains on its assets, with $600 million flowing out of funds during the quarter. By comparison, BlackRock saw inflows of $80 billion and StepStone's inflows increased by $1 billion in the quarter.

T. Rowe management noted that the long-term trend to passive investing has had a negative impact on client flows, which has benefited BlackRock and its iShares ETF products. Over the past five years, BlackRock and T. Rowe Price have seen AUM grow at 14% and 13.3%, respectively, but the sources of growth have been drastically different. While T. Rowe Price increased its AUM by $707 billion over the last five years through the end of 2020, only 6.1% of that growth has been from client inflows. Meanwhile, BlackRock's AUM has increased by $4 trillion over those five years, with 37.5% of this increase coming from client inflows. The younger private equity firm StepStone has increased its fee-earning AUM by $20.6 billion since March 2019, with almost all of this growth coming from net inflows from contributions.

What investors should expect going forward

T. Rowe Price has a solid balance sheet and is sitting on a big cash balance. The company could use that money to return additional capital to shareholders through dividends or stock buybacks, or it could seek out acquisitions in the hot mergers and acquisitions market. T. Rowe is a solid Dividend Aristocrat -- a member of the S&P 500 that's raised its cash payout for 25 years in a row -- but likely needs to shake things up in order to keep pace as investors switch to more passive funds. According to analysts, T. Rowe Price is expected to see revenue grow 22.4% for all of 2021, while 2022 earnings are expected to grow at a more modest pace of 5.7%.

BlackRock is a leading provider of portfolio solutions that are focused on more passive investing solutions. The company has done a great job of building out its iShares ETF products and capitalizing on the increasing popularity of ETF solutions. Analysts expect BlackRock to see revenue growth of 17% for 2021, while next year analysts expect the company to grow sales 9.9%.

Finally, StepStone Group is a growing company that has steadily increased its asset base, and could be positioned well for the ongoing strength in private equity firms. Analysts expect StepStone Group to see revenue growth of 42.6% for all of 2021, while growing another solid 16.7% in 2022.

Each asset manager has a different strength

These three asset managers have a positive tailwind from the recovering economy, and each one has its own appeal to different types of investors. If you're an income investor seeking a long-term Dividend Aristocrat, T. Rowe Price is a good choice. Meanwhile, BlackRock is a stellar long-term performer that is on top of big trends in the investment space, and StepStone Group is a young company that has a little more risk but the potential to be a stellar long-term growth stock.