Investors cheered reports in Israel that COVID-19 vaccine candidate BriLife appears to provide protection for at least six months after a second dose.

Shares of NRx Pharmaceuticals (NRXP 4.35%) were vaulting 15.1% higher as of 3:25 p.m. EDT on Monday. The nice gain came after Israeli media reported that participants in a clinical study evaluating experimental COVID-19 vaccine BriLife maintained a high level of protection six months after a second dose and didn't need a third booster dose. NRx owns exclusive global rights to market the BriLife vaccine, which was developed by the Israel Institute for Biological Research.

NRx Pharmaceuticals has been one of the worst-performing vaccine stocks in 2021, with its shares sinking more than 50% as of the market close on Friday. It's not surprising that investors welcomed the news about the potentially long duration of protection for BriLife. 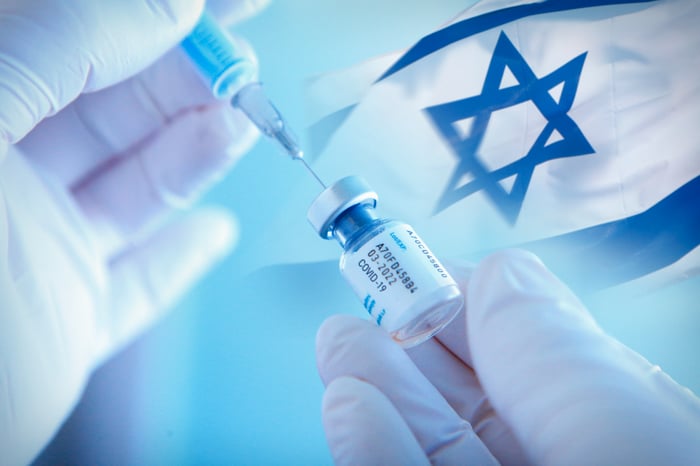 However, there are a few caveats with this good news. NRx didn't directly announce the results itself but instead referenced an article published in The Times of Israel. That article summarized a report that aired over the weekend on a television station in Israel, Channel 12. The Channel 12 story stated that 230 participants in the clinical study had been notified they didn't need a third dose of BriLife because their protection remained high but didn't provide many details.

The report that no third booster dose is needed six months after participants received a second dose is encouraging. However, it's still too early to claim victory for BriLife. More testing will be required.

Nrx Pharmaceuticals CEO Jonathan Javitt stated, "With this new information, and more expected in the coming weeks, we are preparing to submit a phase 2b/3 protocol for BriLife against an established active comparator." The company also awaits a decision by the U.S. Food and Drug Administration on Emergency Use Authorization for Zyesami in treating patients with severe COVID-19.

Why NRx Pharmaceuticals Stock Is Jumping Again on Thursday
349%