Novonix, FREYR, and Microvast have some unique advantages in the space.

"Selling picks and shovels to gold prospectors" is a classic economic statement that alludes to who really benefitted from the 1840s California Gold Rush, namely the various merchants who supported the miners by dealing in equipment and supplies. The statement could be updated for a new generation of businesses looking to benefit by supporting high-profile electric vehicle (EV) companies like Tesla and upstarts such as Lordstown Motors.

In the U.S., the Biden administration strongly supports policies that will promote the shift toward EVs. In the huge Chinese market, demand for such vehicles is rising. And around the world, the major legacy automakers are getting in on the electric game. It all adds up to a lot of bullish energy.

The EV sector is still young enough that it's not entirely obvious which players will dominate it, but these three companies appear to have a good chance at being among the companies supporting the EV players and the ones who could benefit most if EV production does take off. 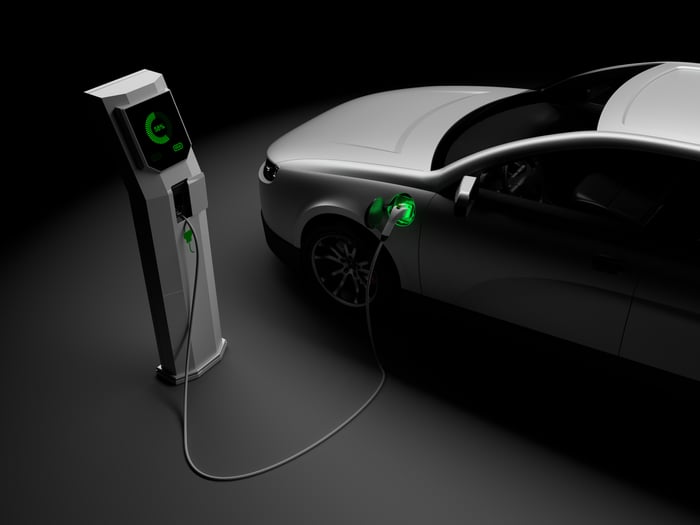 Battery maker Microvast Holdings (MVST -7.69%) flirted with meme stock status this month, accruing a 28% one-week price gain after President Joe Biden announced his goal for half of the new cars sold in the U.S. to be electric models by 2030. But beyond the Reddit-fueled buzz, the company has some genuinely positive attributes. And the stock pendulum later swung the other way, with traders selling it off after the company reported mixed second-quarter results.

The Chinese lithium-ion battery maker's revenue surged 53.8% year over year to $33.4 million, but its net loss widened to $27 million compared to its $7.9 million loss in Q2 2020. Management blamed the rising tide of red ink on the global semiconductor shortage and higher raw material prices, among other factors.

While its bottom-line woes shouldn't be ignored, Microvast can draw on the $700 million in net proceeds it booked from the special purpose acquisition company (SPAC) merger that took it public, as well as its growing stream of revenue. Management's guidance is for 2021 revenue growth in the 34.9% to 44.2% range. Its capital budget is currently directed almost entirely toward building new factories and funding research and development, both of which have the potential to significantly boost its top and bottom lines. In the Q2 earnings press release, Chief Operating Officer Shane Smith said that the company was on track to bring another 4 gigawatt-hours of high-volume manufacturing capacity online at its Clarksville, Tennessee, and Huzhou, China, facilities by early 2023.

Microvast currently has more than $1.5 billion in contracts through 2027, according to a recent investor presentation. Its estimated revenue for 2025 is $2.3 billion and its lineup of customers includes several large European electric transport makers and U.S. commercial and military vehicle maker Oshkosh (OSK -3.88%), which won the U.S. Postal Service's Next Generation Delivery Vehicle contract.

Additionally, Microvast could benefit from China's efforts to build diplomatic relations with the Taliban, now Afghanistan's de facto rulers. A spokeswoman for China's Foreign Ministry, Hua Chunying, stated the "Taliban have repeatedly expressed their hope to develop good relations with China, and that they look forward to China's participation in the reconstruction and development of Afghanistan," the New York Post quoted.

Afghanistan contains massive deposits of lithium -- the element at the heart of rechargeable electric car batteries. Indeed, a 2010 U.S. Department of Defense document dubbed Afghanistan "the Saudi Arabia of lithium." If China's economic involvement in Afghanistan allows those vast resources to be tapped, it could eventually cut Microvast's raw materials costs significantly.

Though it's currently listed only on a foreign stock exchange, Australia-based Novonix (NVNX.F -5.28%) on May 10 submitted a draft registration statement to the SEC requesting inclusion on the Nasdaq. The synthetic graphite maker is a supplier to the suppliers, making anodes (and eventually cathodes and electrolytes) for EV battery makers. It already has a production facility operational in Chattanooga, Tennessee.

Novonix announced a significant partnership on Aug. 9, when Phillips 66 (PSX -2.77%) revealed its decision to buy a 16% stake in it. Getting Phillips 66 involved in its operations will give Novonix better access to specialty coke and other materials the energy company makes for electric car battery producers.

"Phillips 66's investment will provide us with the capital needed to support growth and ongoing R&D as we continue to scale our synthetic graphite production and develop new technologies for higher-performance energy storage applications," said Novonix CEO Chris Burns in a press release.

Through the deal, Novonix gained both a significant amount of cash and a direct connection to a company supplying some of its most crucial materials. This basically guarantees Novonix will get the specialty coke it needs first (as long as any is available), and will likely result in cost savings on that material and any others made by Phillips 66.

Novonix stands out as a non-Chinese synthetic graphite producer, making it effectively immune to any potential disruptions caused either by that country's internal politics or its international trade disputes. Novonix expects to manufacture 20 million tons of graphite anodes in 2025, and projects its annual output will grow to 100 million tons -- resulting in approximately $1 billion in revenue -- in 2030. While the company is nowhere near that size now, it appears to have the connections and technical expertise to become a significant player in its niche.

Bearing the name of the Norse god of sunshine and prosperity, FREYR Battery (FREY -3.04%) currently sits on approximately $850 million in net proceeds from the SPAC merger that took it public. Its share price has been extremely volatile, with periods of short activity driven chiefly by rumors, but the Norwegian battery maker has some notable advantages.

FREYR is looking to build approximately 43 GWh of battery manufacturing capacity by 2025 and plans to boost that to 83 GWh by 2028. Placing most of its factories in Norway (though it might also construct a U.S. facility) gives it access to ample renewable energy, presumably helping it pursue its goal of a zero-carbon footprint. While U.S. and European EV battery manufacturers already operate with much lower carbon emissions than Asian producers, FREYR aims to raise the bar even further.

It also has a partnership with 24M Technologies, a lithium-ion cell manufacturer headquartered in Cambridge, Massachusetts. This company has a semi-solid battery design FREYR may use, along with significant advances and patents in materials technology and battery cell architecture for large batteries. The alliance complements FREYR's lineup of large, potential supply chain partners.

In effect, FREYR says, it is "leveraging Norway's highly skilled workforce and abundant, low-cost renewable energy sources from hydro and wind in a crisp, clear and energized environment" as its portion of the partnership, providing a specific manufacturing environment for 24M's semi-solid batteries. Morgan Stanley analyst Adam Jonas gave FREYR stock an overweight rating in early August, writing in his research note that the battery company's "decision to outsource the semi-solid cell technology from 24M is meant to lower execution risk and accelerate time to production in the unique Norwegian industrial ecosystem."

While FREYR isn't yet making batteries, it has the available technology, nearly $1 billion in funding, and the human capital necessary to succeed in the space.

At this point, it's impossible to predict with any certainty which of the many battery companies springing up to supply the burgeoning electric car sector will become long-term success stories, and which will wither away.

These three, however, are vigorous contenders, as they each boast features and partnerships that appear to give them tangible advantages in a competitive space. Investors looking to profit from the electric vehicle revolution should consider adding one or all of them to their portfolios.

Why Shares of Microvast Holdings Skyrocketed This Week