Please ensure Javascript is enabled for purposes of website accessibility
Log In Help Join The Motley Fool
Free Article Join Over 1 Million Premium Members And Get More In-Depth Stock Guidance and Research
By Harsh Chauhan – Aug 29, 2021 at 6:20AM

The graphics specialist has more upside to offer thanks to several solid catalysts.

Nvidia (NVDA -1.51%) stock has delivered impressive returns to investors so far this year thanks to a string of terrific quarterly results that have established the graphics specialist as a top tech play. Investors have come to expect outstanding growth from the chipmaker quarter after quarter due to the tailwinds in the video gaming and data center markets, its two largest segments. 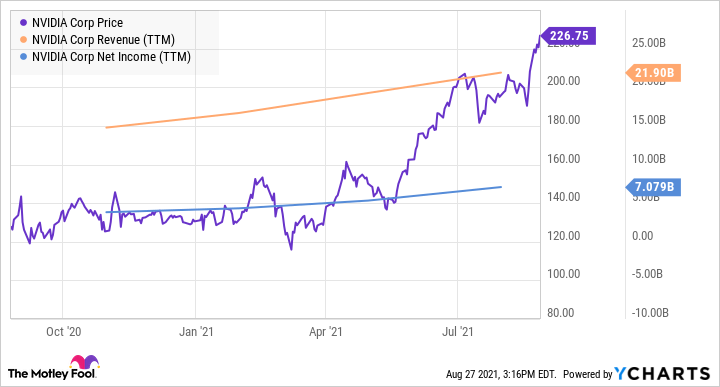 The good part is that the company didn't disappoint when it released its fiscal 2022 second-quarter results recently. Nvidia crushed Wall Street's expectations. It reported robust growth in revenue and earnings and set forth solid guidance that exceeded analysts' estimates. The company's Q2 revenue shot up 68% year over year to a record $6.51 billion, while adjusted earnings surged 89% to $1.04 per share.

Nvidia expects $6.8 billion in revenue this quarter, which would translate into a 44% year-over-year increase. However, don't be surprised to see Nvidia exceed expectations once again thanks to favorable business conditions and the company's dominant position in the video gaming and data center markets, which could help the stock deliver more upside over the long run.

Let's look at the reasons why Nvidia can sustain its high pace of growth in the long run, and why it remains a solid bet for anyone looking to add a top growth stock to their portfolio. 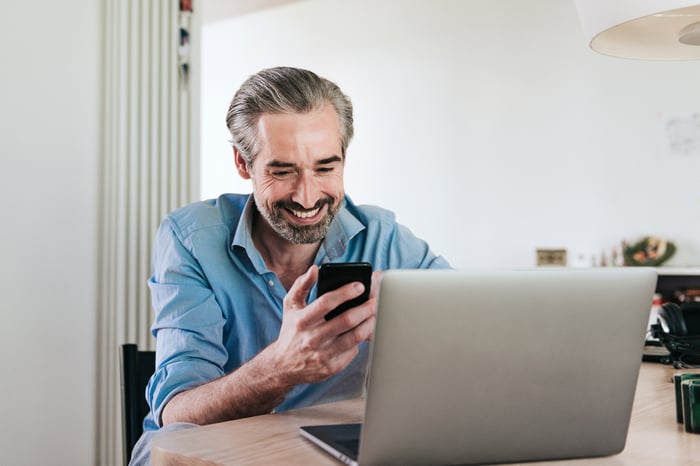 Nvidia's outstanding performance last quarter was driven by an 85% year-over-year increase in the company's gaming revenue, which came in at a record $3.06 billion. The segment produced 47% of Nvidia's total revenue in part because of the "exceptionally strong" demand for its Ampere graphics processing units (GPUs).

Nvidia CFO Colette Kress pointed out on the earnings conference call that GPU demand continues to outpace supply. This is impressive considering that graphics cards based on the Ampere GPUs have been on sale for over a year now. More importantly, Nvidia noted that only 20% of its installed base has upgraded to an RTX series card. So the majority of Nvidia customers are still using cards running on older architectures such as Pascal, which was introduced over five years ago.

So the upgrade cycle that Nvidia's Ampere GPUs have triggered is set to continue, especially considering that more games now have features like ray tracing, which can only be experienced on RTX series cards. Additionally, the growing population of video gamers is also turning out to be a tailwind for Nvidia's gaming business.

The company highlighted that the number of PC gamers has increased by 20% in the past year on the popular game distribution platform Steam. Statista forecast that the number of PC gamers is expected to jump from an estimated 1.75 billion last year to nearly 1.86 billion in 2024. Not surprisingly, the high-end PC gaming hardware market is expected to grow at an annual pace of more than 20% through 2024, according to Jon Peddie Research.

Nvidia can win big from this secular growth of the PC gaming hardware market. For instance, GPU sales are expected to jump to $54 billion in 2025 from $23.6 billion in 2020, and Nvidia controlled 80% of this space in the first quarter of 2021. All of this indicates that the healthy growth of its gaming business is here to stay for a long time to come.

Meanwhile, the data center segment turned in another quarter of outstanding growth, with revenue increasing 35% year over year to $2.4 billion. It accounted for 36% of the top line. The business's strong growth was driven by the increasing adoption of its data center chips by hyperscale and cloud computing customers. Those chips have been deployed by the likes of Microsoft, Amazon, and Alphabet's Google.

Nvidia is witnessing growth across diverse niches of the data center market, including artificial intelligence (AI) inferencing. The company's inference-related revenue more than doubled year over year thanks to the new A30 GPUs, which are four times more powerful than the previous-generation T4 chips.

Additionally, Nvidia's GPUs are helping companies deploy AI for real-world use cases. What's more, the company says that it is winning share in the data center accelerator market as customers are "shifting from CPUs to GPUs, driven by the stringent performance latency and cost requirements of deploying and scaling deep learning AI workloads."

Nvidia's data center supremacy can also be judged from the fact that its chips power 342 of the world's top 500 supercomputers, including eight of the top 10. Also, 70% of all the new supercomputer systems used Nvidia's chips, according to the company's estimates. This dominant position bodes well for Nvidia, as the AI chip market is expected to clock 45% annual growth through 2025, according to a third-party estimate.

Nvidia's two major businesses, which accounted for 83% of its revenue last quarter, have healthy prospects that should help sustain its growth. However, additional catalysts are coming into play that investors need to know about.

Nvidia's automotive business turned on the heat in fiscal Q2, rising 37% year over year to $152 million. This was impressive considering that the automotive business had lost momentum in recent quarters. However, Nvidia is now witnessing an uptick in this space because its winning designs are now moving into the production phase. Management said that its automotive designs could "drive a major inflection in revenue in the coming years."

As it turns out, Nvidia is sitting on $8 billion worth of automotive designs that it expects to translate into revenue over the next six years. Given that the company's automotive design win pipeline swelled with new partnerships last quarter, it could generate stronger revenue from this segment in the coming years.So Nvidia could soon count on another growth driver that could accelerate its already strong pace of growth. That's why investors who haven't bought this tech stock yet should consider going long before it flies higher thanks to the multiple catalysts it is sitting on.