Zoom Video Communications' (ZM -4.03%) stock price dropped to its lowest levels in over three months after the company released its second-quarter earnings report on Aug. 30. The video conferencing software company beat Wall Street's estimates on the top and bottom lines, but its guidance for the third quarter slightly missed analysts' profit expectations and hinted at a post-pandemic slowdown.

Should investors buy Zoom's dip, or should they avoid it as more people physically return to work and school? Let's examine Zoom's growth rates, future plans, and valuations to find out. 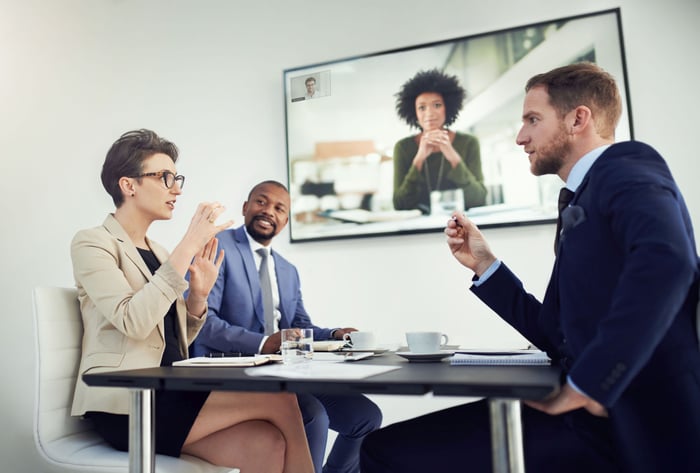 On their own, those headline numbers look impressive. However, they also represent a significant deceleration from Zoom's previous two years of breakneck growth:

Zoom expects its revenue to rise 31% year over year in the third quarter, which surpasses analysts' estimates, but for its adjusted EPS to grow just 8%-9%, which misses expectations for 10% growth.

For the full year, Zoom expects its revenue to increase 51% and for its adjusted EPS to rise 42%-43%. Both of those forecasts surpassed analysts' expectations.

Zoom is still generating healthy growth on top of its triple-digit percentage revenue growth last year, but the market's reaction indicates investors are still worried about its post-pandemic growth. Zoom's stock was also trading at 73 times forward earnings and 26 times this year's sales prior to its earnings report, and those high valuations indicated it needed to hit a grand slam -- not just a home run -- to rally higher.

A history of conservative guidance

Zoom's growth will inevitably decelerate in a post-pandemic world, but investors should still note how often it "sandbags" its guidance.

At the end of fiscal 2021, Zoom predicted its revenue would rise 42%-43% in fiscal 2022, compared to its latest guidance for 51% growth. Therefore, Zoom clearly prefers to temper Wall Street's expectations instead of raising the bar too high and setting itself up for a big earnings miss.

What should investors actually focus on?

Instead of trying to figure out exactly how much Zoom's revenue growth will decelerate as the pandemic passes, investors should track its expanding operating margins and rising free cash flow.

Zoom's operating margins are expanding as its scale improves and its data center capacity rises. That expansion is generating plenty of cash for the expansion of its sales teams, investments in new products and services like Zoom Phone and Zoom Events, and the integration of its upcoming purchase of the cloud contact center provider Five9 (FIVN 0.89%).

Those strategies could help Zoom shake off its reputation as a one-trick pony and support its long-term evolution into a cloud-based communications giant.

How Zoom's business could stabilize after the pandemic

Zoom's margins should either remain stable or expand in a post-pandemic market, since many of its new users during the pandemic stayed on free plans instead of upgrading to paid tiers.

During the latest conference call, CFO Kelly Steckelberg said free users accounted for "about 30% of our minute usage today as compared to like 10% pre-pandemic." Reducing its dependence on those free users and pivoting toward larger enterprise customers could stabilize Zoom's long-term growth.

Zoom ended the second quarter with 2,278 customers contributing more than $100,000 in revenue over the past 12 months, which represented 131% growth from a year ago. Its number of customers with more than 10 employees grew 36% year over year to approximately 504,900, while its 12-month net dollar expansion rate among those customers remained above 130% for the 13th straight quarter.

Those robust growth rates indicate Zoom remains a popular alternative to more complicated enterprise-oriented platforms like Cisco's Webex and Microsoft Teams, and its existing enterprise users are still upgrading to higher tiers and adopting more of its services.

Is it the right time to buy Zoom?

I believe Zoom still has room to grow since it clearly disrupted a fragmented market filled with mature and complacent players. Investors who expect the remote work trend to continue after the pandemic ends should accumulate some shares of Zoom after its post-earnings drop. However, the stock is still pricey and will remain volatile -- so it isn't an ideal investment for queasy investors.