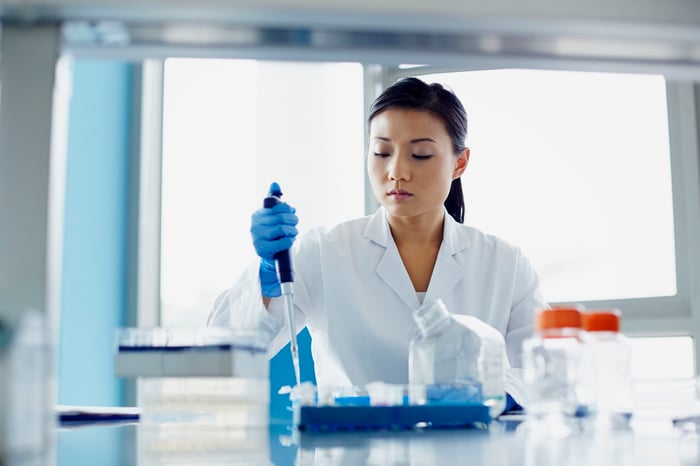 Investors were unimpressed by the company's two big announcements on Friday, and Tuesday's move lower was just a continuation of the market's reaction to that news. The company said that it had closed its merger with Grace Therapeutics; former Acasti shareholders now own 59% of the combined company. The second -- and more concerning -- part of the announcement was that the company would perform an 8-1 reverse split at the start of trading on Aug. 31. This was being done, management said, to bring Acasti back into compliance with the NASDAQ's minimum bid price rule.

Reverse stock splits are rarely a good sign because they are often done by struggling companies that need to increase their share prices to remain eligible to be listed on a particular exchange. If a stock's price drops after a reverse split, as was the case Tuesday with Acasti, more investors may sell, lowering the stock's price further.

Acasti isn't making money yet, but it does have potential. The biotech company is working on treatments for three rare conditions: subarachnoid hemorrhage (life-threatening bleeding between the brain and skull, often caused by an aneurysm or the ballooning of a weakened blood vessel wall), ataxia-telangiectasia (a progressive, neurodegenerative genetic disease that impacts motor function, mostly affecting children) and postherpetic neuralgia (debilitating nerve pain caused by shingles).

The main concern for Acasti is how it will fund the clinical trials for the three candidates in its pipeline, as it has only $60 million on the books, which it says is sufficient to cover operations for at least two years. The focus for now will be on bringing lead candidate GTX-104 -- a hopeful subarachnoid hemorrhage treatment -- through to its phase 3 trial, which is expected to start sometime in the second half of 2022.

The company last August ended its TRILOGY 2 study of its drug candidate CaPre as a treatment for hypertriglyceridemia (high levels of triglycerides in the blood), saying that CaPre hadn't met the trial's primary endpoint.

The stock currently appears to be a risky investment. The best hope for Acasti shareholders is that by holding onto it for the long term, they may at some point reap the benefits if the company eventually brings one of its candidates to market.