Year-over-year sales comparisons haven't been meaningful so far. But the rules are changing again.

High investor interest in insurtech provider Lemonade (LMND 0.79%) has somewhat slowed lately as the company hasn't been delivering the super-high growth seen in some other recent tech IPOs. It doesn't help that Lemonade's financials took a hit from added claims filing following the Texas freeze early in the year and that its competition remains strong. Those issues have contributed to the insurance company's stock price dropping about 35% year to date and 57% from a 52-week-high set in early January.

Yet management is confident in the company's growth prospects. The third-quarter earnings report (releasing later this month) should offer an apples-to-apples, year-over-year sales comparison. It might even show high revenue growth, as management has been at work activating a broad marketing strategy while launching new products. 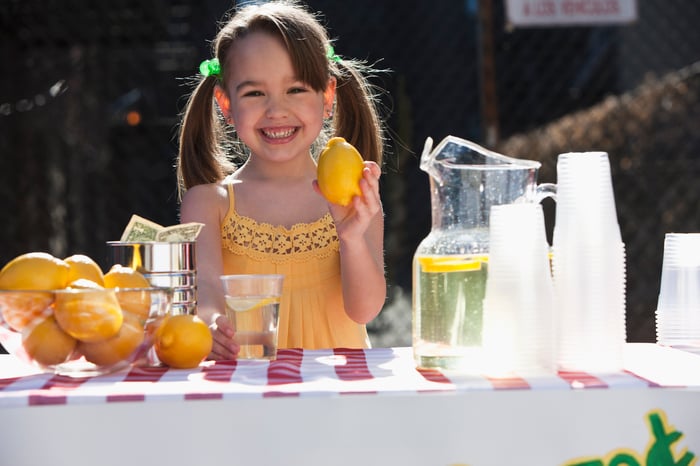 The artificial intelligence-powered insurance provider has gained more than a million customers since it began operating five years ago. It takes a fee from each policy that it sells and cedes the rest of the premium to third-party reinsurers to cover the claims. Lemonade restructured its deals in the third quarter of last year to keep 25% and hand over 75%. This arrangement came in handy in the first quarter of 2021, when the loss ratio hit 121% due to heavy claim filing, and Lemonade was shielded from most of the negative impact.

But it also made year-over-year financial data difficult to fairly compare, since an anomalous amount of money was going out, lowering revenue. The upcoming Q3 report should provide a more meaningful year-over-year sales comparison for the first time.

Another factor that can skew things short term is that, as a young growth company, Lemonade has restructured once again. CEO Daniel Schreiber detailed some of this complicated new arrangement in the second-quarter conference call:

When we entered into the current reinsurance program a year ago, we locked in 55 of the 75 points for a three-year term with our remaining 20 points up for renewal each year. Having just completed the first annual renewal process ... we made a modest reduction in the scope of our quota share program, stepping down from 75% to 70%. Put differently, we renewed 15 of the 20 points that were up for renewal.

What that means is that, in the coming year, Lemonade should see somewhat inflated revenue as compared to the prior year because it's keeping more money for itself.

Even though this would have only a limited effect on Lemonade's top line, it's still a good sign. As the company grows and launches new products, one-off incidents such as the Q1 Texas freeze, which it said elicited a year's worth of claims in one day, won't be as impactful. That's why it's comfortable keeping more funds in its own coffers.

One test of this thesis will be how Lemonade is affected by Hurricane Ida, which tore through several Southern states and then went on to damage the mid-Atlantic region and New England states. Its most devastating impact was in Louisiana. Lemonade renters and homeowners insurance isn't offered yet in that state, but it offers these products in most of the other states in the region. Another test is the wildfires currently raging through California and other western states. California is a state where Lemonade does offer homeowners insurance.

In the third quarter, it will be important to see how losses in those areas affect Lemonade's loss ratio, and how well the company's expansion protects it from large singular events like hurricanes and wildfires.

Growing in more ways than one

Revenue growth hasn't been a revealing metric over the past year, but several other metrics suggest the company is moving in the right direction. Its premium-per-customer average increased 29% in Q2 and has accelerated every quarter since Lemonade went public. That's right on schedule with the company's growth strategy, which is heavily focused on rolling out new products to eventually offer a one-stop shop for all of a customer's insurance needs.

Gross earned premium, which measures growth in total policy value, increased 90% in Q2 2021 and hasn't been lower than 84% since the IPO.

On the other side of the equation, Lemonade's expansion efforts are taking a toll on the company's bottom line, and it doesn't look as if it's going to become profitable in the near future. Interested investors need to have a long-term outlook on this company and trust in the growth thesis. As it spends on marketing and rollouts, Lemonade is reeling in new customers, particularly young ones buying insurance for the first time. The company is looking to establish relationships with these customers and provide years of policies, chipping away at traditional insurance companies' dominance in the field.

In its initial growth stages, Lemonade is going to be a volatile stock to hold, but I see strong potential for gains. Between its growth factors and now-much-lower stock price, it might be a good time to take a position if Lemonade fits your investing style. However, investors may want to wait and see how the company performs in Q3 as it deals with Hurricane Ida and California wildfires during the quarter.