Though the market honed in on the revenue and earnings shortfalls, the company had an otherwise solid quarter in the face of ongoing supply chain issues. Let's look closer at the results and see if this sell-off is a buying opportunity. 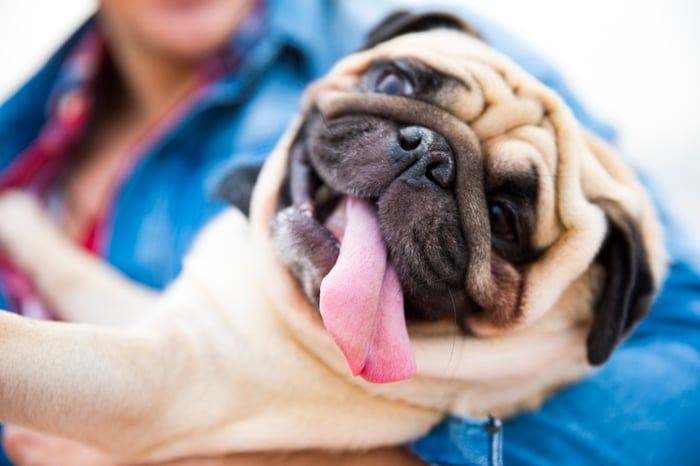 Supply shortages kept sales from growing at their full potential

Chewy reported sales of $2.16 billion, an increase of 26.8% year over year, while analysts were expecting growth closer to 30%. This small discrepancy contributed to the stock's decline following the report, but revenue landed within the guidance range management provided investors back in June.

Supply chain issues that are bogging down many companies are also affecting Chewy. Here's what management said on the matter in the latest shareholder letter:

Out-of-stock levels remained elevated in the second quarter, but they improved modestly versus the first quarter, resulting in a smaller drag on net sales in the second quarter. This is the result of supply chain conditions improving in some areas as certain vendors reduce backlogs. However, other areas like wet dog food are still being affected by industrywide production capacity limitations.

It's hard to generate sales if you don't have products to sell. The good news for shareholders is that this is a short-term issue that should resolve itself over the next year. At the same time, long-term trends are still on a healthy trajectory for Chewy. Net sales per active customer increased 14% to $404, the highest level on record. As pet parents mature in their time as Chewy customers, they tend to increase their spending.

That bodes well for the company considering it added nearly 3.5 million active customers in the past 12 months with a total base of 20.1 million as of the fiscal second quarter.

Moreover, while the company is still not profitable on the bottom line -- the second-quarter loss of $0.04 per share was two cents shy of the analyst consensus -- it did make progress on that front. Chewy's net loss shrank from $32.8 million in the prior-year period to $16.7 million. Management also reiterated its full-year targets for 25% to 26% revenue growth and an adjusted EBITDA margin up 80 to 120 basis points.

The fall in the stock price has more to do with a market that got too optimistic with Chewy stock heading into earnings. Its shares had appreciated close to 20% in the three months prior to the earnings release.

There wasn't anything in the report to indicate its long-run prospects are in jeopardy. On the contrary, Chewy reported efficiencies in its supply chain should improve its long-run adjusted EBITDA margin by 70 to 110 basis points. If that improved profitability materializes, it will far outweigh the effect of these temporary headwinds.

The uncertainty from the pandemic might lead to increased volatility in the company's results near term, but investors can view this latest pullback as an opportunity to start accumulating shares in this growth stock.