Please ensure Javascript is enabled for purposes of website accessibility
Log In Help Join The Motley Fool
Free Article Join Over 1 Million Premium Members And Get More In-Depth Stock Guidance and Research
By Mark R. Hake, CFA – Sep 10, 2021 at 11:44AM

As its reach in the cloud grows, Microsoft (MSFT -0.04%) is making sure shareholders get their cut. The company's using its copious cash flows to buy back shares and increase its dividend, to the tune of a combined $43.9 billion over the past 12 months, with no signs of stopping on either front. Each strategy by itself could enrich investors, but together, they seem to be turbocharging the company's total returns.

Mid-September tends to mark Microsoft's yearly dividend hike – usually by a nickel per quarter, per share, in recent years. With that quarterly dividend currently at $0.56, a boost like those in the past would lift payouts to $0.61, or $2.44 a year, for a yield around 0.8% at recent prices.

Meanwhile, the company's nearing the end of its most recent share buyback program. Of the $40 billion it began with in February 2020 , it had just $8.7 billion remaining as of June 30  , after buying back $6.2 billion in shares during that fourth quarter. If it keeps up that rate of spending, Microsoft could nearly exhaust the rest of its buyback balance by the end of September. 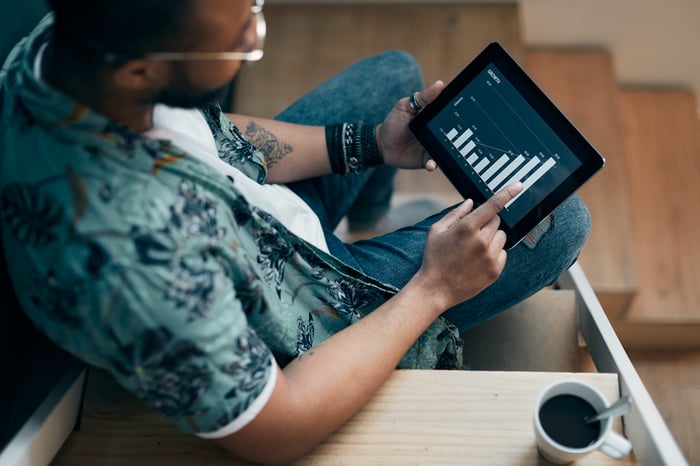 Last year, Microsoft spent 49% of its free cash flow to buy back shares . If it preserves that percentage with this coming year's estimated $67 billion in free cash flow , it'll spend at least $32.7 billion on buybacks – up more than 19%  from its just-concluded fiscal year.

Add that $32.7 billion  to the $18.3 billion or more Microsoft could spend on dividends in its fiscal 2022 , and the resulting $51 billion in giveaways to shareholders represents a 2.26% total yield on the company's $2.26 trillion market cap.

That's assuming, of course, that Microsoft's buybacks actually help shareholders – a theory that the company's performance over the last decade seems to bear out.

How Microsoft's buybacks have helped shareholders 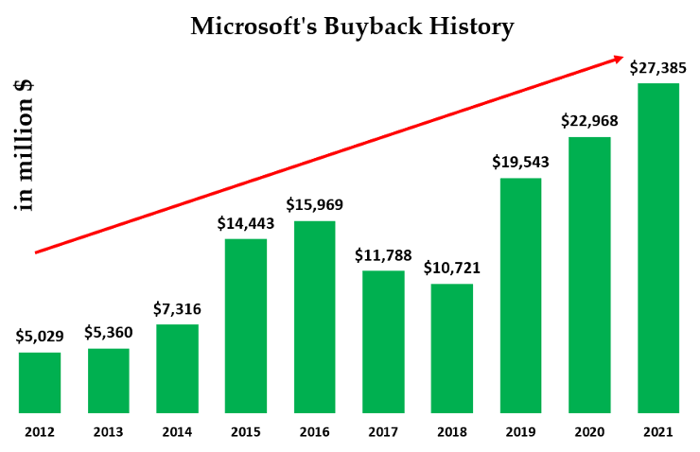 In the last 10 years, Microsoft's trimmed its share count 10.3%.  And with fewer shares outstanding, the amount of dividends per share, or DPS, Microsoft has paid over the past 10 years has grown faster than the total amount the company spends to fund those dividends. 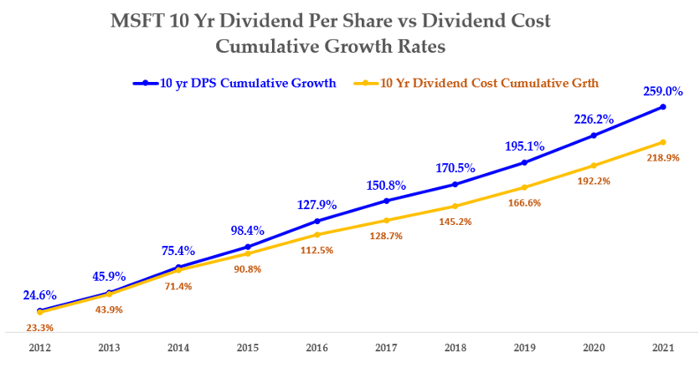 Because of its high-margin, subscription-based software and the company's dominant market share, Microsoft is one of the very few companies boasting consistent free cash flow growth   -- up 91% from 2012 to the end of June 2021, for an average annual compound growth rate of 6.3%.

Since dividends per share are growing faster than free cash flow, we know that Microsoft is using an ever-greater portion of that cash flow to buy back shares. For fiscal 2022, that one-two punch of dividends and buybacks should work out to a 16% gain in total shareholder payments.

Microsoft shareholders have every reason to keep holding on to their shares, given that management is truly acting in their best interests  . Keep an eye on how high Microsoft decides to raise its dividend per share – anything less than $0.05 might be a bad sign, indicating that Microsoft intends to slow its dividend-per-share growth. On the other hand, if the company decides to reup its $40 billion share buyback program, or even increase it, investors might see higher dividend-per-share growth in the future.

Fool contributor Mark R. Hake, CFA, holds no financial position in any companies mentioned. Teresa Kersten, an employee of LinkedIn, a Microsoft subsidiary, is a member of The Motley Fool's board of directors. The Motley Fool owns shares of and recommends Microsoft. The Motley Fool has a disclosure policy.