AMC Entertainment Holdings (AMC 3.44%) is a widely popular stock, so it's easy to hear arguments from both sides on the company's prospects. Folks who think the stock price will go up will point to the fact that fundamentals have nothing to do with this stock; it's all about the supply and demand of shares outstanding. On the other hand, those who think the stock price will go down highlight the abundance of facts pointing to the company's deteriorating operating performance.

Nonetheless, with the NFL season underway, here is one possibility that few are talking about when it comes to AMC stock. 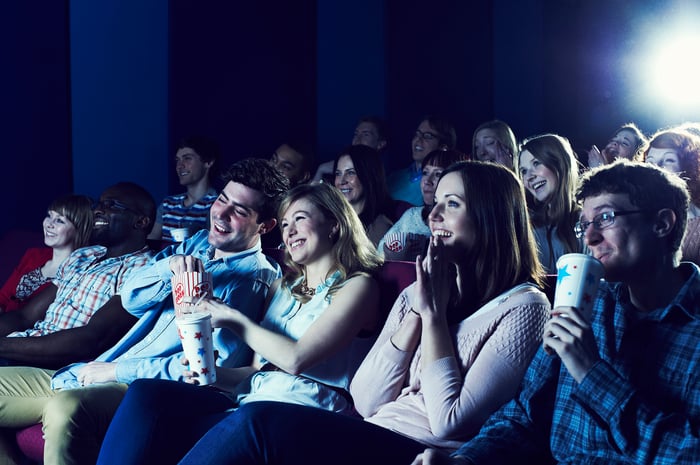 Put something new on the screen

AMC operates 950 theaters with 10,500 screens worldwide. It has mainly used those theaters to show movies, negotiating with studios not to release the films to any other service while they're playing in theaters -- a formula that worked relatively well until the turn of the century.

Starting in 2002, moviegoing began to decrease in North America and was down by more than 20% even before the pandemic's onset. Thanks to higher-quality televisions, better sound systems at home, and the rise of streaming services, fewer and fewer folks are interested to go out and watch a movie.

AMC has likely chosen movie theater locations with dense enough populations to attract the large audiences required to make the investment worthwhile. Dense populations are usually inside large cities. And most large cities have a sports team, if not multiple sports teams. Sports are usually more enjoyable when spectators are watching them with other fans -- or better yet, watching with rival fans. That makes AMC's theaters a great location in which fans can watch games.

The potential and risk of pivoting to sports

It might be expensive for AMC to acquire the rights to show games at its theaters, but AMC already pays handsome amounts for the rights to show movies. It normally negotiates close to a 50/50 split with studios on film ticket sales -- a sum that totaled $1.7 billion in fiscal years 2018 and 2019 for AMC. If AMC pays nearly $2 billion in content costs annually, why not pay for content in an industry that's not as negatively affected by the rise of streaming services?

The main difference is that studios agree to wait until AMC runs the movie, collects payments from ticket sales, and then pays a portion of that money to the studios.

By contrast, sports leagues sell broadcasting rights to distributors at prices negotiated upfront. That adds risk to the distributors because they are not guaranteed to recoup enough revenue to profit from broadcasting the games. It would be more expensive to watch games at a theater than at home -- and there is no guarantee it will gain traction with fans.

However, AMC could run it in test markets and work out the kinks before rolling it out more broadly. The potential is there: According to a June survey by Statista, 25% of Americans said they were avid sports fans. These enthusiasts could be willing to pay a premium for a better experience at an AMC theater. And whereas moviegoers are unlikely to visit a theater multiple times per week, that is entirely possible with sports fans.

For those who believe the operating performance of AMC does not matter to its stock price, a new avenue for revenue and profits is not likely to change their minds. Also not likely to be convinced are those who say that while the idea could be incrementally positive for AMC's business, the stock is up some 2,000% in 2021 alone, and so a moderate increase in revenue still does not justify the expensive valuation.

Skeptics could be right. To help reverse the trend of decreasing attendance, it would have to be an astounding success for it to have a meaningful effect on AMC's stock price. Yet, pivoting to showing sports on AMC screens is something that no one is talking about -- and if more seriously considered, it could potentially move the stock higher in the long run.