The ammunition manufacturer is building the foundation it needs for long-term success.

Fiscal 2022 continues to shape up to be a good one for ammunition maker Ammo (POWW) as its business expands. The company also recently secured an important government contract. Following its bullish first-quarter report and its acquisition of leading online firearms marketplace GunBroker, Ammo is in a stronger position than ever, and it's planning an expansion that could net it even bigger gains long-term.

With that backdrop, there are at least three reasons it looks like a solid pick right now for investors. 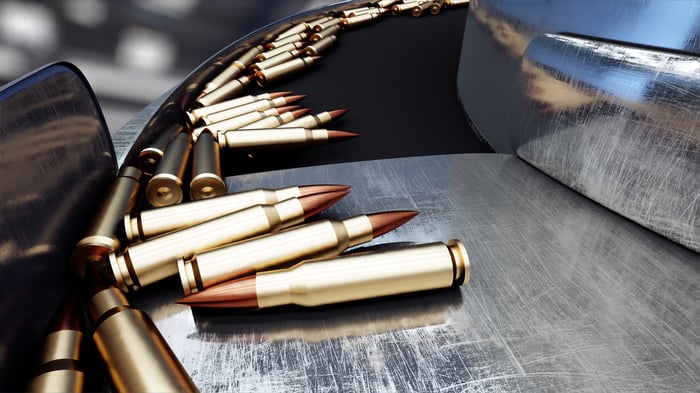 1. Its sales are outperforming its own expectations

After reporting a knockout fiscal first quarter on Aug. 16, including more than 360% year-over-year revenue growth --good for a narrow top-line beat -- and an 85% earnings surprise above analysts' expectations, Ammo continues to see strong momentum in its fiscal second quarter. Soaring demand for ammunition and guns, which resulted in major shortages over the past 18 months, is boosting the entire firearms industry.

In fact, the company raised its second-quarter revenue guidance from $51 million to $55 million just a few days before the end of the reporting period. In a press release, CEO Fred Wagenhals said the growth is coming from both direct ammunition sales and the company's GunBroker acquisition. "We have doubled our priming and loading capacity, and increased our brass manufacturing capacity by approximately 15%," through efficiencies gained by concentrating all production at the Manitowoc, Wisconsin, factory.

Since Ammo both makes complete ammunition and sells brass casings to other ammunition manufacturers, these improvements support multiple income streams. Wagenhals also said GunBroker is outperforming even the strong results from 2020, and improvements to the platform's offerngs and staffing are underway.

2. It just got a military contract

While civilian ammunition sales are an important part of any U.S. ammo manufacturer's business, Ammo announced earlier this month it won a military ammunition contract too. The deal will see the company produce "signature-on-target" (SoT) rounds for the Irregular Warfare Technical Support Directorate, part of the U.S. Department of Defense. SoT rounds produce a bright flash when they hit the target or some other object, enabling machine gunners and other soldiers to know where their shots are landing. These advanced munitions replace tracer rounds, which perform a similar function by shining brightly and visibly as soon as they are fired, potentially giving away the position of the person firing them. SoT rounds enable shooters to remain better hidden while still allowing them to adjust their aim with visible feedback.

Wagenhals said the ammunition manufactured under the program will "address two of the most critical [needs] -- safety and increased lethality." Ammo already has a track record of producing high-end specialty ammunition for law enforcement and military use. This includes armor-piercing rounds and subsonic rounds for use with suppressed firearms. With the company already experienced in making specialized ammunition, SoT round manufacture is likely a natural expansion for the company.

3. It's increasing capacity to reduce the massive demand backlog

Though the ammunition shortage began when sales surged last year due to the COVID-19 pandemic and political unrest, demand is still strong and growing. According to company data, its ammunition revenue rose 590% in the 18 months ended Aug. 23, 2021. In the third week of August alone, sales of 5.56x45mm, the ammunition used in the popular AR-15 platform, rose 48% over the previous week, while sales of 7.62x39mm ammo spiked 124%.

Ammunition companies still face a huge backlog of orders awaiting production, which will support near-term growth. During the most recent earnings call, Wagenhals said that in addition to its growing, fulfilled sales, it has an order backlog worth approximately $238 million.

Ammo is taking active steps to seize the current opportunity. In a Sept. 14 investor presentation, it revealed the construction of major new facilities in Manitowoc. The expanded factory will have 165,000 square feet of manufacturing space for making both complete ammunition and brass casings, and the project should be complete by the summer of next year. The efficiency gained with the larger factory may trim up to $1 million from expenses, according to management, while also enabling the company to triple its current production output.

Operating in this record-setting market that shows few signs of cooling off, plus a large order backlog, military contract, and key manufacturing expansion, the company is well-positioned to build on its success from the past year. Ammo continues to be a winner among firearms-related consumer-discretionary stocks.