The uranium miner has notable plans and is starting to show some progress toward its big goals. Here's what you need to know.

Shares of Energy Fuels (UUUU -0.34%) have risen an incredible 300% over the past year -- compared to a gain of 33% for the S&P 500 Index over the same span. That's a performance worth talking about, for sure. But the background story beyond this massive stock price advance is what's most interesting. Here is why investors are so fond of Energy Fuels today.

Uranium at the core

At its base, Energy Fuels is a uranium producer. That was a rough market following the Fukushima nuclear disaster in Japan in 2011. Countries around the world started to move away from nuclear power, which led to a steep drop in the price of uranium. Miners, as you would expect, pulled back in an effort to get supply and demand back in balance. 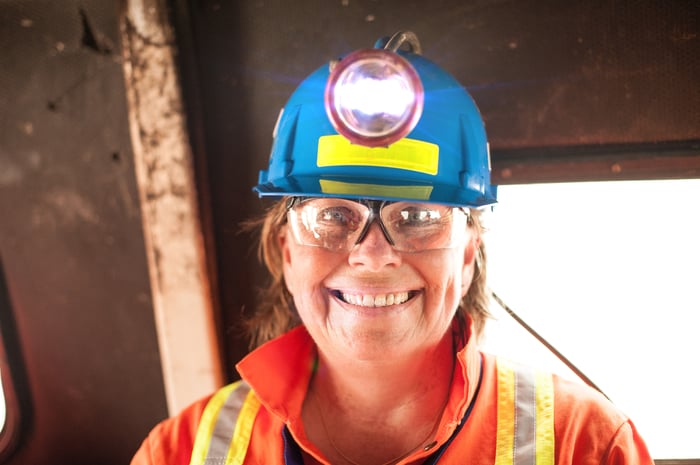 Those are pleasing advances for an industry that's been under material pressure for nearly a decade. Investors took notice, especially given that Energy Fuels had been building a stockpile of uranium to, essentially, arbitrage rising prices. Basically, it bought uranium with the intention of holding it until prices were higher and it could be sold at higher prices.

And, along with this, the company took the step of paying off its debt in late 2020. That puts the miner in a strong position to support its business, whatever direction it decides to go in. And that's where the story starts to get really interesting.

While there's nothing particularly wrong with uranium, it is a volatile commodity subject to significant price variations over time. So Energy Fuels decided that it would diversify its business just a little bit. Hitting on a major theme, it announced in April 2020 that it would start producing rare earth metals. These are used in high-tech gadgets, and they are in very high demand. But rare earth metals are mostly produced in China, which creates a supply chain problem for some companies.

Investors liked Energy Fuels' plans, but plans need to be backed by results. The rubber hit the road in November of last year, with the miner successfully executing a rare earth metals pilot program. And then, in 2021, it started commercial-scale production of a key intermediary product in the rare earth metals value chain and worked to ensure it had a supply of the base material needed to support its emerging business. In other words, the uranium miner took material steps forward in its new venture. 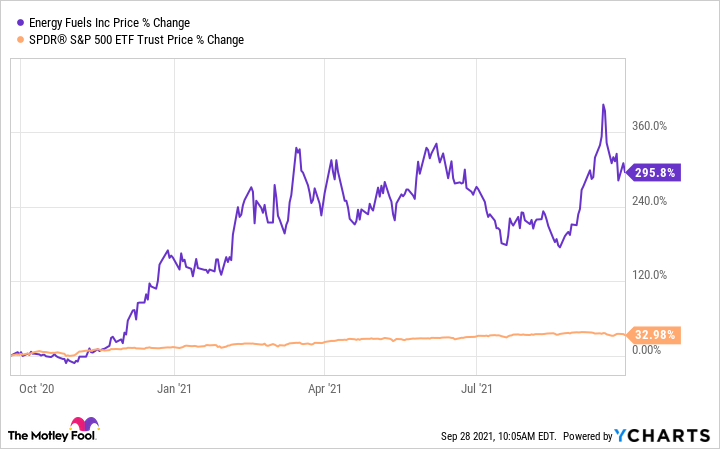 Rare earth metals are a hot space right now, given the tensions surrounding China's relationship with other developed countries. So investors really like the idea that Energy Fuels is moving in this direction, which is fairly complementary to its core uranium business. In fact, this is likely the real driving force behind the stock price advance, which started to pick up steam at about the same time that Energy Fuels announced its success with the rare earths pilot project. An upturn in the uranium market has been a second tailwind.

And don't underestimate that uranium tailwind. Consider that Energy Fuels recently sold some of its uranium assets to another company in exchange for cash, stock, and a contract to process the material at an Energy Fuels facility. In other words, it has been able to cash in on the uranium advance in more ways than one while freeing up management to focus on the rare earth metals business.

So that's the backstory surrounding Energy Fuels. However, investors need to step back here and understand that it is a small company, one with a tiny $1 billion market cap even after the huge price advance. And while rare earth metals are a hot sector, that could lead to undue optimism on the part of investors. Uranium, meanwhile, is a commodity market prone to material price swings. So the risks here are significant, and conservative investors will probably be better off avoiding the stock. More aggressive types, however, might want to take a closer look if they're searching for an interesting way to play the rare earth metals space. Notably, the core, and complimentary, uranium operation is an interesting foundation on which to reach into the new area.