Wall Street is hoping for a rebound after another drop on Monday.

After a tough day on Monday, the stock market looked poised to claw back at least part of its declines on Tuesday morning. Futures contracts on the Nasdaq Composite (^IXIC) were up 50 points to 14,512 as of 7:45 a.m. EDT, signaling a slight move to the upside when the regular session starts.

In the electric vehicle space, Lordstown Motors (RIDE -7.19%) has suffered huge declines lately, and Tuesday morning didn't look like it would bring better news for the would-be automaker. However, one lesser-known stock on the Nasdaq was moving sharply higher. Below, we'll talk about Lordstown's challenges and then reveal which micro-cap stock is rewarding shareholders.

Another down day for Lordstown

Lordstown Motors was down more than 7% in premarket trading on Tuesday morning. It would mark the third day in a row of steep drops for the aspiring EV player, following drops of 10% on Monday and 18% last Friday. 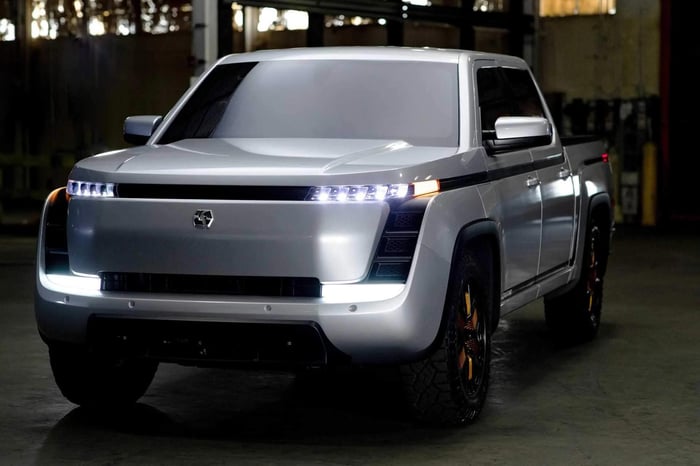 Most of the controversy surrounding Lordstown right now concerns its recent agreement in principle with Hon-Hai Precision Industry, better known as Foxconn. Under the terms of the deal, Lordstown would sell its Ohio assembly plant to Foxconn for $230 million. By itself, that could have been good news, as it would have freed up capital for Lordstown to use in research and development. The deal has Lordstown keeping its hub motor assembly line, battery module, and packing line assets, along with certain intellectual property rights.

However, it's the rest of the deal that has investors concerned. Foxconn is demanding a contract manufacturing agreement for the proposed Endurance electric pickup truck, and it also wants Lordstown to give it licensing arrangements and other rights on future vehicle programs. Moreover, Lordstown sold Foxconn $50 million in stock at an average price of just under $6.90 per share -- well below the $7.36 per share closing price on the day prior to the announcement.

Lordstown also expects delays in Endurance production, with limited volume through the first half of 2022. Higher operational costs further curbed enthusiasm among investors, many of whom now wonder what's left to drive the stock price higher in the future after the Foxconn deal.

Despite Lordstown's woes, another Nasdaq stock looked poised to bounce on Tuesday. Agrify (AGFY -4.01%) was up more than 12% in premarket trading as the indoor agricultural cultivation solutions specialist announced an acquisition that will enhance its value in the cannabis and hemp industry.

Agrify purchased Precision Extraction Solutions and Cascade Sciences from Sinclair Scientific for $50 million, including $30 million in cash and $20 million in Agrify stock. Sinclair also obtained an earnout provision that could boost the total price as high as $65 million if Cascade and Precision perform well through the end of 2021.

Agrify expects the deal to boost its exposure to the fast-growing cannabis and hemp extract market, which it sees growing to $24 billion by 2028. The company has concentrated largely on indoor grow farm solutions that use vertical farming technology and data-driven software for cultivation and production planning. Precision and Cascade work with more than 30 multi-state cannabis operators and more than a thousand cannabis and hemp customers. Agrify will also grow its physical presence in the U.S., with seven states that include key markets like California, Florida, and Colorado.

Agrify has been highly volatile, with shares soaring early in the summer only to give up ground more recently. Shareholders hope that the latest news will enhance Agrify's fundamental business prospects and justify sustained higher share prices in the future.