The chipmaker for the EV and self-driving car market had some momentum behind it.

Shares of Indie Semiconductor (INDI 3.42%) rose 21.9% in the month of September, according to data provided by S&P Global Market Intelligence. The recently public chipmaker for the electric-vehicle (EV) and autonomous-vehicle industry benefited from rising demand for computer chips for automakers.

While the chip shortage severely dented auto sales in the third quarter, the continued push toward all-EV or mostly EV fleets is helping boost Indie's drive to blanket the market with its semiconductor solutions for automakers. 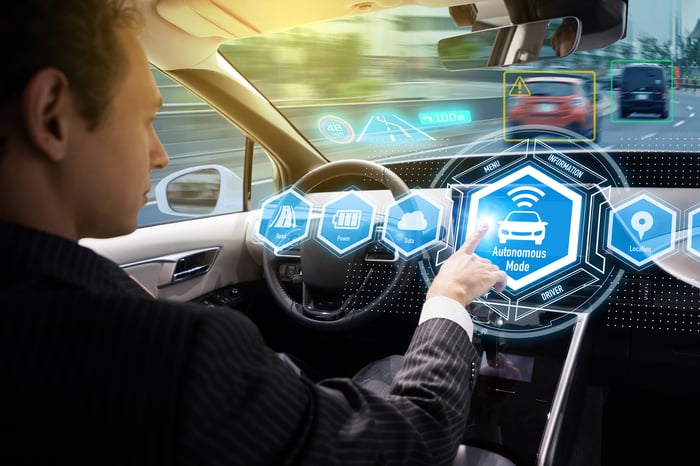 Indie Semiconductor went public in June through a reverse merger with a special purpose acquisition company (SPAC). It has a developed relationship with Tier 1 automakers for edge sensors for advanced driver assistance systems (ADAS), such as LiDAR, connected cars, and electrification applications.

Although Indie doesn't identify exactly who its end customers are, it has said that two of them account for 59% and 12% of its revenue, or 71% of the total. This is a significant concentration. Should the OEMs run into trouble, it could impact the company's performance. It's also worrisome because those two companies also represent nearly half of its receivables.

Business has been good for Indie, with revenue rising 148% in the second quarter, which ended June 30. The company points out it has shipped over 100 million devices to its customers over the past decade. It also notes increasing penetration into the market, both with additional OEMs coming on board, as well as the number of its products being put into vehicles.

Indie believes its total addressable market can grow to as much as $40 billion over the next five years from around $19 billion, with the greatest growth occurring in EVs and safety systems.

The risk, of course, is the impact the chip shortage will have on business. Automakers just recorded a bruising third quarter where Ford sales dropped 37%, GM was down 33%, and Stellantis tumbled almost 23%.

Yet it wasn't all doom and gloom. Toyota was up 5%, and notably for Indie, Tesla blew past delivery estimates, hitting 241,300 deliveries, a 20% year-over-year gain. Ford's electric-vehicle sales were also up 92% in September from last year.

Still, an overall weakened auto market sent Indie's stock 5% lower on the news, and it's starting the month of October down nearly 7%.

Up 20% in the Last Month, Is This Small Auto Supplier Stock a Buy Now?

These 2 Small Chip Stocks Are Booming Thanks to Electric Vehicles