Please ensure Javascript is enabled for purposes of website accessibility
Log In Help Join The Motley Fool
Free Article Join Over 1 Million Premium Members And Get More In-Depth Stock Guidance and Research
By John Ballard – Oct 5, 2021 at 11:12AM

Investors love its leading position in this important market.

Shares of Nvidia (NVDA -1.51%) were up 2.4% at 10:18 a.m. EDT on Tuesday. Market sentiment was more positive today, as the S&P 500 index was also trading higher, which would explain part of the bounce in Nvidia's share price after the recent pullback.

As for company-specific news, the graphics specialist announced an extension of its collaboration with Lenovo (LNVGY -0.67%) to include participation in VMware's (VMW -0.07%) Project Monterey early-access program, which takes advantage of networking technologies like Nvidia's BlueField data processing units. 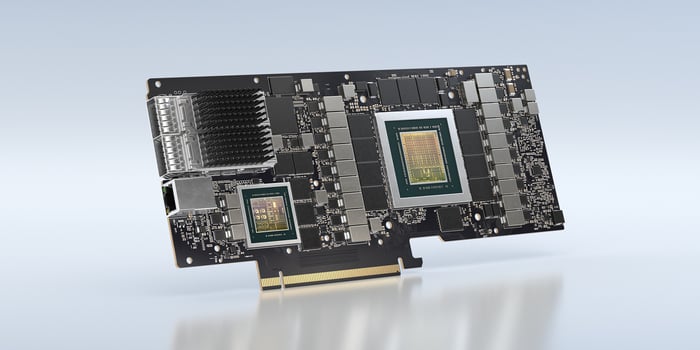 Project Monterey was first introduced at VMworld 2020. It aims to improve how enterprises can take advantage of hardware accelerators, such as graphics processing units, which are increasingly taking over more workloads from central processing units in the cloud.

Nvidia's data center momentum has been unstoppable over the last few years, even through the pandemic. In the fiscal second quarter, Nvidia's data center segment grew revenue by 261% over the same quarter two years ago. The new technologies and partnerships unveiled this year suggest its best days are still ahead.

The partnership with VMware, a leading cloud infrastructure provider, is one more piece of the puzzle of Nvidia's plan to tackle a $100 billion opportunity in the data center market, where the chipmaker is widely viewed as a leader.

Nvidia has been one of the hottest tech stocks to own in recent years but has sold off along with the broader market over the past month. With the data center market continuing to represent a massive opportunity for the company, the dip in stock price could be a good opportunity to buy shares.