Levi Strauss (LEVI -2.61%) reported better-than-expected results for its third quarter of fiscal 2021 (which ended on Aug. 29) after the market close on Wednesday. The denim and casual clothing retailer's growth was driven by consumers refreshing their wardrobes as economies around the world broadly reopen.

Through Wednesday's regular trading session, Levi stock is up 43% since its initial public offering in March 2019. The S&P 500 index has returned about 8% over this period.

Below is an overview of Levi's quarter, along with its outlook. 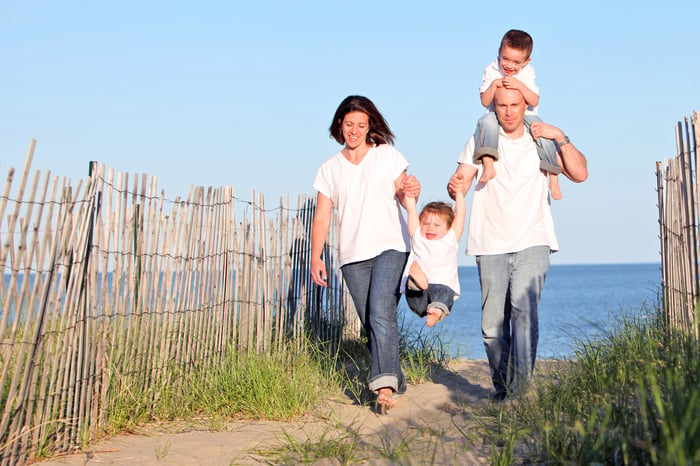 The company had easy year-over-year comparables due to the pandemic, which significantly hurt the year-ago period's results. For context, revenue in the reported period was 3% higher than in the two-year-ago period (Q3 2019).

Here's a look at regional results:

Net revenue through all digital channels grew 10% year over year and accounted for about 20% of total revenue.

Income from operations under generally accepted accounting principles (GAAP) was $216 million, up from $92 million in the year-ago period.

Levi attributed the increase to higher net revenue and gross margin. (Gross margin was 57.6%, up from 54.3% in the year-ago period.)

Wall Street had been looking for adjusted earnings per share of $0.37, so the company easily exceeded the profit expectation.

For the first nine months of fiscal 2021, cash generated from operations was $499 million, more than double the year-ago period's result. Adjusted free cash flow for this period was $220 million, compared to negative $31 million in the year-ago period.

Levi ended the period with $1.47 billion of cash, cash equivalents, and short-term investments, and $1.24 billion in long-term debt.

For the fourth quarter, management guided for revenue growth in the range of 20% to 21% year over year, which is slightly lower than the 22% Wall Street had been expecting. For Q4, management also expects adjusted EPS of $0.38 to $0.40, which is in line with the $0.39 analysts had been projecting.

Management raised its full-year guidance, citing third-quarter results coming in higher than it expected and the continued expectation that holiday sales will be good. For fiscal 2021, it now expects adjusted EPS of $1.43 to $1.45, up from the prior outlook of $1.29 to $1.33. This compares to fiscal 2020 and fiscal 2019 adjusted EPS of $0.21 and $1.12, respectively.

As a point of comparison, athletic wear-focused Lululemon Athletica has guided for annual revenue growth of 41% in fiscal 2021.

I'll end on the same note as I did last quarter: "Levi has bounced back nicely from the pandemic's hit to its business. In the next couple of quarters, it should continue to benefit from pent-up consumer demand for apparel, so the real test for its business will likely come next fiscal year."