Investors are rarely this enthusiastic about a food distributor, but this stock caught their notice.

Organic food distributor United Natural Foods (UNFI -10.97%) saw its stock price climb by more than 22% on Sept. 28 after it reported its fiscal fourth quarter and full fiscal 2021 results. Traders tucked in eagerly -- despite the market dropping overall that day -- and even though United Natural missed Wall Street's consensus prediction for its quarterly revenue. Here's a closer look at three of the factors driving the bullish response, and what they may mean for the company's future.

1. From near-bankruptcy to health again

Just two years ago, United Natural was hovering on the brink of bankruptcy. However, its performance in fiscal 2021, which ended July 31, shows the extent and solidity of its turnaround. While its top-line figures weren't exactly barn-burners, with fiscal Q4 revenue dropping 0.5% year over year and full-year results rising a modest 1.5%, they were significant improvements over the company's recent situation. 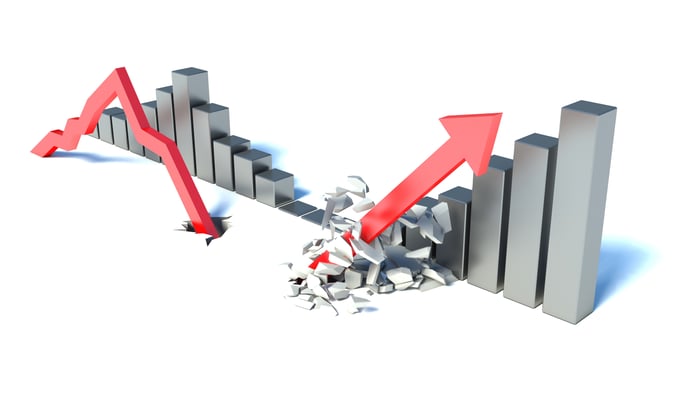 As United Natural pointed out, its slight decline in Q4 revenue can be chalked up to the extraordinary sales it experienced in the May-through-July quarter of 2020, when U.S. consumers were still stockpiling food during the early stages of the COVID-19 pandemic. Viewed in terms of a two-year stack that filters out the pandemic's distortion, its fiscal Q4 revenue was up 7.5%. Full-year fiscal 2021 revenue of $27 billion was up by more than 26% from fiscal 2019's $21.4 billion.

So while its year-over-year gains don't look very impressive, the two-year stack shows a major improvement in United Natural's performance. The pandemic-driven sales boost clearly helped United Natural get back on track from its previously feeble position. Both its slight fiscal 2021 growth and its insignificant Q4 decline relative to its sales during the period of panic buying highlight how it has successfully consolidated its gains. The company now appears ready to move forward with renewed energy and efficiency.

United Natural appears to have recovered from its 2018 to 2019 low patch, and management's guidance suggests it will maintain its momentum. For fiscal 2022, the company predicts 4% growth in revenue, adjusted EBITDA, and adjusted earnings per share. Revenue is expected to land in the range of $27.8 billion to $28.3 billion for the year, while EPS is forecast to be in the $3.90 to $4.20 range. The company anticipates cutting its net debt by $100 million to $150 million.

The ongoing growth of other companies in the food distribution space also bodes well for United Natural. For instance, Performance Food Group (PFGC 0.25%) also saw significant gains and is expected to continue growing. Part of its success has been driven by an aggressive acquisition strategy, and United Natural has also followed this path -- it bought the SuperValu retail and wholesale grocery company in 2018. That acquisition has since been fully integrated into United Natural's operations.

The real key to understanding why the market has grown more enthusiastic about United Natural can probably be found in its margins, earnings, and deleveraging statistics. A fundamental driver of the company's improving margins has been its rapid debt reduction. It directed the "strong cash flow generation" of fiscal 2021 toward slashing its net debt by $317 million, with $142 million paid off in Q4 alone. This reduced its leverage ratio from 3.9 times EBITDA in Q4 fiscal 2020 to 3.1 times EBITDA in Q4 fiscal 2021.

During the most recent earnings call, CFO John Howard said "further debt reduction, including applying the proceeds of our Riverside monetization to reducing debt" -- referring to a sale-leaseback of the company's Riverside distribution center, which it will acquire through a deferred $152 million buyout in fiscal 2022 -- will likely drive the ratio below 3 by the end of its fiscal 2022.

Continuing to improve its debt position should further boost United Natural's margins, and lead to higher earnings per share. Adjusted EPS rose 11.3% year over year to $1.18 in fiscal Q4, while the full year's adjusted EPS $3.88 represented a 42.6% increase. Based on EPS projections and other factors, some analysts are forecasting a $59 price target for the company's shares, or an approximate 24% upside from today's share prices. While analysts' projections are frequently best taken with a large grain of salt, the market clearly finds this bullish scenario compelling given the surge in the company's share price since its latest earnings report.

Why United Natural Foods may be right for you

United Natural operates in a challenging market -- organic food distribution -- but it seems to have turned the corner decisively from its earlier difficulties. Its revenue is growing, especially from the two-year stack perspective, and it appears to have kept its momentum even though the early pandemic's surge in food sales has long since subsided.

Debt reduction, expense management, and creation of value are listed explicitly by the company as some of its most important strategic goals. Its efforts on those fronts are translating into tasty earnings gains which could lead to a rewarding upside in the medium to longer term. Overall, things look bullish for this healthier-eating-focused member of the food industry.