The alcoholic beverage giant lifted its overall outlook even after taking a write-down charge on hard seltzer inventory.

The brewer of Corona and Modelo beers raised its short-term sales outlook even though demand is slumping in the hard seltzer niche, which had been an attractive growth target until just recently.

In an early October conference call with Wall Street analysts, CEO Bill Newlands and his team explained why that disruption isn't getting in the way of Constellation Brands' wider ambitions for the business in 2021 and beyond.

Wall Street came into the quarterly report worried about growth. Competitors had described slumping demand for hard seltzer in recent weeks, and that niche had been driving most of the industry's gains lately. 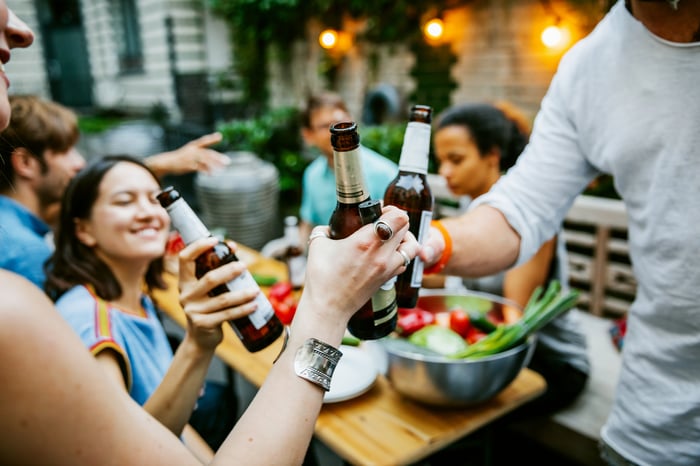 Yet Constellation Brands saw no real impact from the slowdown. Sales trends held up in the high single-digit range that investors have seen for several quarters now.

That stability is helping the company stand out from rivals like Boston Beer, which had to lower, and then withdraw, its 2021 outlook. "We're unique in our position versus our competitors in this space," Newlands explained, "as our primary growth is coming from our core beer portfolio and we're not reliant on the growth of hard seltzers." Constellation notched wins in brands like Modelo and Corona Extra that completely offset declines in its new Corona Hard Seltzer release.

The company still has plans to build on the success that its hard seltzer had since its release late last year, despite volatile results expected in the niche over the next few quarters. Management says the area will go through a shakeout period now as the dozens of smaller competitors mainly fall off of retailer shelves since they don't have enough demand to sustain the space.

There will be more room to compete after that process runs its course, and Constellation Brands also sees space opening up for other hard seltzer products that don't focus on low-calorie, low-carb offerings. "We've already started to innovate in this way," Newlands said, "with distinct products like Refresca and Lemonada. We've also discovered that consumers are looking for more robust taste and flavor in their seltzers."

Constellation Brands isn't immune to the supply chain issues that have been hitting most manufacturing companies. In-stock levels were too low in the quarter, for example, and costs are still rising for things like aluminum, fuel, and glass. These factors contributed to a jarring 5 percentage-point decline in the profitability in the beer segment.

Management expects the inventory problem to be solved gradually over the next six months. The cost issues will linger a bit longer, it says, and earnings will also be pressured by extra spending on the Mexican brewery network.

Yet Constellation's main growth avenue, its beer portfolio, is as healthy as ever. And today's investments are laying the groundwork for rising margins in the wine and spirits business and in the beer segment. That's why investors should be happy with what they heard from the management team heading into the final quarter of 2021.