Streaming leader Netflix (NASDAQ:NFLX) made headlines this week when it announced a new toy line based on its hit series Squid Game in partnership with Walmart (NYSE:WMT). This deal is another layer on top of Netflix's entry into products and other new ventures. It's also a move away from the company's core business of streaming.

It actually looks a lot like one of its main video-streaming rivals, Disney (NYSE:DIS), which has been moving in the other direction, toward streaming. So does this mean that Netflix will be moving into other new areas as well? 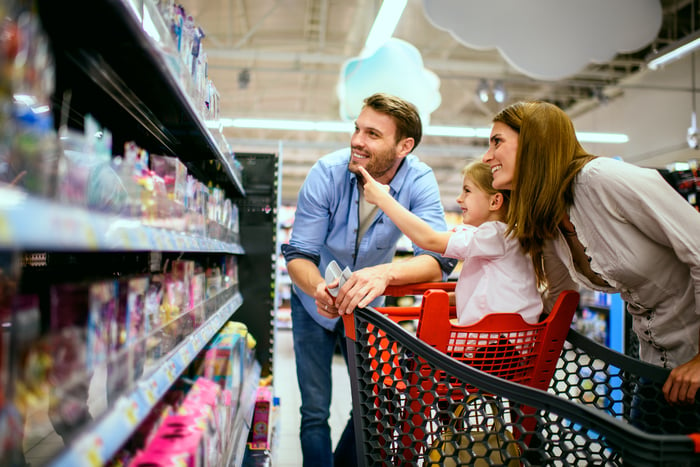 Netflix is the clear leader in streaming media, but the competition is catching up with the streaming market booming during the pandemic due to stay-at-home orders. At the end of the second quarter, Netflix had 209 million subscribers, and at the end of Disney's third fiscal quarter (July 3), it had nearly 174 million paid subscribers.

The real blow for Netflix, though, was a net loss of subscribers in the U.S. and Canada in the second quarter. However, it still gained 1.5 million subscribers globally, and management expects to add another 3.5 million in the third quarter.

But the reality of a potentially saturated market and increasing competition means that Netflix is exploring other ways to grow. Creating its own content has been the primary way it drives customer engagement and acquisition. The company beefed up its original content pipeline this year as other networks launched their own streaming sites with exclusive content. Netflix has more than 100 new pieces of content slated for the full year. Now the streaming giant is moving horizontally to expand in other ways, taking a page from the Disney handbook.

On the second-quarter earnings conference call back in June, CEO Reed Hastings confirmed that the company would enter the gaming business. However, he stressed that it was to "enhance the service," and not to boost short-term profits. "There's a number of supporting elements, consumer products ... where we're really trying to grow those to support the title brands to get our conversations up around each of the titles so that the Netflix service becomes must-have," he said.

That has definitely been the case with Squid Game, which has become Netflix's most-watched show ever and has generated a large collection of physical products. Netflix sells merchandise on its own site as well as through partner sites. The deal with Walmart is a deeper dive into Netflix content-themed merchandise, reminiscent of Disney's shop-in-shops at Target.

Netflix releases third-quarter earnings on Tuesday. It will be intriguing to see if Hastings continues with the approach of supporting services in his remarks, or if there will be a more open attempt at creating new revenue streams. Both Disney and Comcast's Universal Studios have created theme parks based on their studio content, and with Netflix building its own content portfolio, it may only be a matter of time until it enters this area as well.

There are other ways to monetize its content further, including licensing and other kinds of media. That's one of the features that have made Netflix such a great stock to hold throughout the years, even before it actually had positive cash flow: its ability to pivot into new areas and create strong businesses out of them.

Is Netflix stock a buy now?

Investors were put off after the second-quarter earnings release, sending the price down, but renewed confidence has lifted it back up. How the stock performs in the short term will depend on that magical number of new subscribers added this quarter. Long term, however, Netflix continues to push into new areas of expansion, a key component in a great growth stock, making it a worthwhile company to own.