After half a year or more of growth, luxury stocks such as LVMH Moet Hennessy Louis Vuitton (LVMHF 2.31%) and Capri Holdings (CPRI 1.14%) took a hit recently when China cracked down on Macao casinos as part of a wider cultural offensive against westernization.

After getting bid down, however, the luxury sector got a boost this week when Moet Hennessy's third-quarter 2021 results came in strong. The positive data that perked up the stock market arguably provides a basis for a bullish outlook -- with a few lingering caveats. Let me explain. 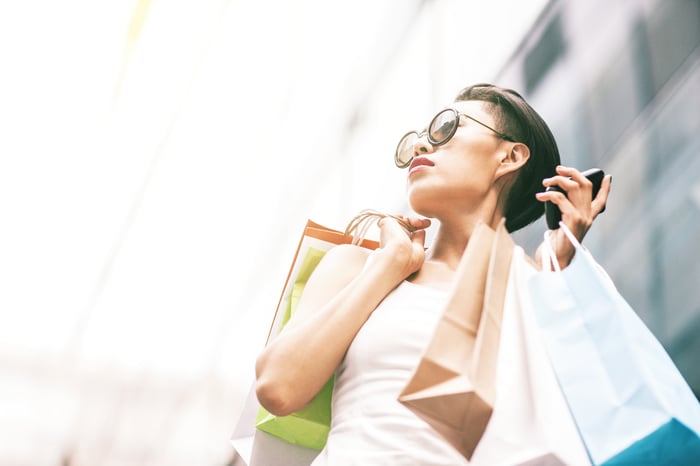 Why investors were worried

With Asia as a key market for luxury goods, the sector nosed down after a long stock market climb because the Chinese government introduced stringent new rules for Macao casinos. The new rules include increased oversight and control of casino operations by Chinese officials, potential restrictions on dividend distribution by gambling companies, and similar measures.

Potentially putting the regulatory thumbscrews on Macao's casinos seems to be part of a wider effort by the Chinese state to limit and control the presence or imitation of western culture in China. Several Chinese companies have been subject to large fines, interference, or even blocking of their attempts to go public via initial public offering (IPO). In the wider cultural push, the state is apparently rejecting westernization, believing western culture has taken a wrong turn and now brings chaos, disintegration, nihilism, and both social and economic decline with it.

The latest blow to business through the Macao restrictions caused Moet Hennessy's stock price to plunge 13% in a single week. Analysts considered a statement by Chinese President Xi Jinping during an Aug. 17 speech to be particularly ominous for the luxury goods sector. Xi remarked his cabinet would "make basic institutional arrangements on income distribution" and take steps to "adjust excessive incomes." Investors feared this would cut back on the incomes of those most likely to buy luxury goods. China has become a critically important sector for the luxury market since summer 2020. At that time, the economic problems wreaked by COVID-19 and its associated lockdowns caused demand to collapse over much of the world, while China remained a robust market. Even in pre-pandemic 2019, Chinese consumers represented 35% of the world's luxury demand and 90% of its sales growth.

Clearly, investors are right to have eyes on China when it comes to the luxury market's prospects. However, Moet Hennessy's Q3 results (released on Oct. 12) paint an upbeat picture for luxury companies in general -- at least for the time being. Organic revenue growth shows remarkable consistency across several different time periods during the year. Organic revenue grew 11% year over year during the first nine months of 2021, grew 11% during the first six months, and grew 11% during Q3.

This stability carries over to the growth shown by various product categories during the same period. The best sellers were Fashion & Leather Goods, which grew 38% across the board compared to the two-year stack of 2019's pre-pandemic performance. Wine & Spirits rose around 10%, while Watches & Jewelry was slightly positive and Perfume & Cosmetics was flat to slightly negative. The only real loser was the Selective Retailing Segment, comprising retail stores and duty-free product brands, which dropped 19% to 25% in various periods of 2021 compared to 2019. Moet Hennessy says this sector declined because of continued weakness in international travel.

Significantly, the company reports the "United States and Asia continued to see double-digit growth," with its Sephora stores continuing to expand their network in China, also. Whatever the eventual effects of the Chinese cultural initiatives that have been disrupting both domestic and foreign enterprises over the last few months, they are clearly not putting a brake on the luxury sector at the present time.

Other luxury companies saw their stock price rise following Moet Hennessy's earnings release. Where Moet Hennessy's shares gained 1.9% on the day it released its Q3 report, Capri Holdings' stock price jumped 3.1%. Capri also saw its share price drop when the Macao restrictions were announced. However, it has several trends in its favor, including a 178% year-over-year surge in revenue for Q1 fiscal 2022, positive net income versus a net loss in Q1 fiscal 2021, and improved guidance for fiscal 2022. It also made several acquisitions likely to be accretive moving forward.

The situation is looking sunnier for the luxury brand stocks than it did before Moet Hennessy's latest earnings release. The fact Chinese culture includes an acceptance of luxury purchases as a form of social acknowledgment of success likely considerably reduces the risk that Xi's cultural policies will result in a cut back on luxury purchases despite the Macao brouhaha. With sales remaining strong, including in the key Asia market, a bullish outlook on Capri Holdings, LV Moet Hennessy, and related companies looks valid, and the sector's run of growth seems likely to continue.