There have been a record number of IPOs so far in 2021, far beyond what you might imagine: a grand total of 800 initial public offerings at the time this was written. That's getting close to double the 2020 figure of 480, which itself was a record above the year 2000 total of 397.

There are many factors that could be affecting this IPO craze. Whatever the case, it opens up a lot of opportunities for investors. At the same time, there might only be a handful of new stocks on the market that end up becoming great investments, making it all the more tricky to figure out where it's worthwhile to invest your money.

One of the more well-known companies to hit the markets this year is eyewear maker Warby Parker (WRBY -1.04%), which went public just three weeks ago. Its stock dropped initially but has since rebounded. Is it just general market volatility? And is this a buying opportunity? 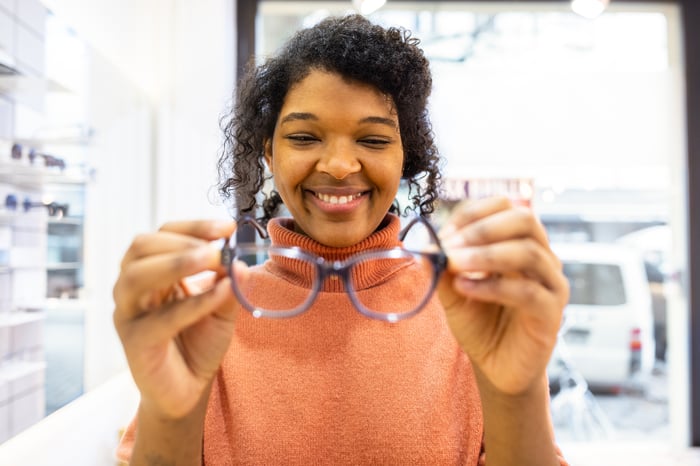 Warby Parker runs on a simple but compelling model. Founders Neil Blumenthal and Dave Gilboa didn't understand why designer glasses were so expensive and thought they could deliver a quality pair for much less money, direct from the manufacturer. Thus, in 2010, Warby Parker was born, and it was a pretty immediate success.

Revenue was $487 million in 2020, an impressive 33% year-over-year increase considering it was during the pandemic. Its digital-first approach was a decisive factor in its success last year when people stayed home, and it was especially notable because people weren't spending on extras, such as trendy eyeglasses, or going out for nonessential eye exams. It services 55 markets and operates 145 physical stores.

It's breaking the boundaries of traditional eyeglass retail in several ways. The company offers free home try-ons, which means it sends customers a collection to try, and they can send back the ones they don't want as well as the ones they want to prepare with a prescription. It also has virtual try-on technology on the website.

Warby Parker has more than 2 million active customers and a net promoter score (NPS) of 83, indicating customer satisfaction in an industry with an average NPS of 30. It also has a nearly 100% customer retention rate after 48 months.

The company also has a socially conscious component with its Get a Pair, Give a Pair program. It has given 8 million pairs to people in need since inception, and says that has led to $1 billion in income for those people.

The company says that there is a global eyewear market of $140 billion, with $35 billion of that in the U.S., where 200 million Americans need some sort of vision correction. And that number is growing at a projected compound annual rate of 9.2%, giving Warby Parker a steady way to grow its business. It also cites the rise of telehealth and e-commerce as trends that should drive its sales.

As for its own growth initiatives, there are several. It's expanding its retail footprint, looking to enter international markets, upgrading its tech and digital infrastructure, improving product design, and bolstering its vision-care options.

It looks to me like the company has a robust model generating healthy growth and a visionary mindset, both signs of a good investment.

Will its stock keep rising?

Warby Parker stock sank initially but is now on the rise, surpassing the IPO price at the time this was written. I think there's a lot of potential here, with a large market opportunity, growing sales, and an innovative approach. Management has shown that it can think beyond the typical, and do things better, and I think we can expect a lot from Warby Parker.

There are a few caveats here. One, selling eyeglasses, even in a better form, isn't so different from any other eyewear seller. I'd like to see Warby Parker demonstrate more lateral thinking. Two, the company is still posting losses. I'll be waiting to see how it does in its first quarter as a public company. But investors should keep this stock on their watch lists.

Down 80%, Should Investors Buy the Dip or Avoid Warby Parker Stock?

Why the Future of Warby Parker Stock Just Became Blurrier