It depends on how much help you're looking for.

Given that it's one of the world's largest drugmakers, it's reasonable to think that Viatris (VTRS 1.84%) could be a reliable wealth building stock. Though the company's generic drugs and off-brand medicines will not be a quick path to riches for investors, people who invest now could get the benefit of years and years of price appreciation as it continues to slowly generate cash flow from its markets. And that growth might come at low risk.

Still, a mere few years ago, the company was actually two separate entities. One was the drug manufacturer, Mylan, and the other was Pfizer's generics manufacturing business unit, Upjohn. The merger in November 2020 between the pair left a lot of lingering questions about the prospects for Viatris' performance, however. Does Viatris' refurbished status make it a no-brainer retirement buy, or is the new entity a troubled version of its former selves? 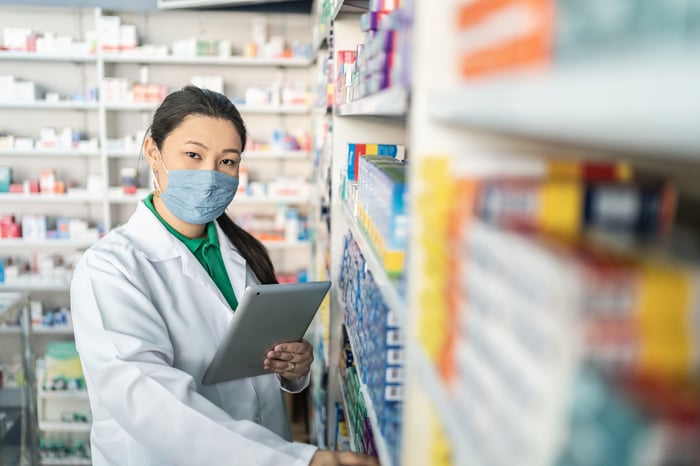 Why Viatris could be a great stock for the long haul

In my view, the largest appeal of buying Viatris is that it's a company that makes pharmaceutical products that real people rely on to maintain their health. It owns the rights to make cash cow drugs that no longer have exclusivity protections, like Lipitor, Zoloft, and even Viagra, so its revenue base isn't going anywhere.

And it makes a galaxy of generic, over-the-counter, and biosimilar drugs for which there is also consistent demand. Right now, its total revenue is rising thanks to newly marketed generics and biosimilars, and in the second quarter of 2021 it brought in 69% more sales than in the same period of 2020. As the market for biosimilar drugs is expected to grow by 130% through 2027, Viatris will be well-positioned to maintain and grow its slice of the pie.

Finally, there's the issue of share performance and the prospect of dividend growth. Right now, Viatris has a dividend yield of 3.26%. That's hardly enough to make anyone rich overnight, but management has assured investors that hiking the dividend will likely be an annual affair. Likewise, once the lingering effects of the merger have shaken out, management has also hinted that share buybacks are probable. People who invest now will see their cost basis fall and fall as the years pass, assuming things go according to plan.

Why there might be better options for your retirement goals

The biggest reason that it might be better to hold off on a Viatris purchase is that the company simply hasn't been around for very long in its current form.

Whereas the Pfizer generics unit and Mylan both had performance histories going back years before the merger in November of 2020, Viatris itself is brand new, and it isn't yet clear whether it can get around the pitfalls of its predecessors, like shoddy profitability. Nor is there any clear competitive advantage that Viatris has over its drug-producing peers. In sum, there isn't yet evidence for any secret sauce that would empower the stock to outperform the market.

After all, Viatris probably won't be a rapidly growing company, and its revenue from complex generics and biosimilars sold in developed markets actually dropped slightly in the most recent quarter. Furthermore, the market for generic drugs isn't what I'd call dynamic, even though it's more or less guaranteed to expand with the passage of time and the expiration of exclusivity protections on branded medicines.

And management hasn't yet shown whether it can realize the $1 billion in cost efficiencies by 2023 that were pitched to investors as part of the merger. Nor has management proven itself at the helm of the newly created entity, though their credentials are impeccable.

While Viatris may prove itself to be a reliable and relatively safe investment over the next few years, it might not be the best choice for building wealth. And while it may have a place in your retirement portfolio, provided that you prefer stocks that pay significant dividends, you'd need to invest quite a bit of money upfront to get an appreciable amount of cash flow in return.

So, it's possible that Viatris might help you to retire as a millionaire, but it definitely won't be the biggest contributor to the effort. Given its shaky performance since the merger, you might even be better off investing in an automatically diversifying index fund. On the other hand, this stock is going to be a slow burn, so it's not a problem to wait for a few more quarters to see how its financials are trending before making a purchasing decision.