Excitement has been growing over LendingClub's new model and the company's potential earnings power.

Shares of the digital marketplace bank LendingClub (LC -5.85%) have been climbing all month, as more investors begin to understand the power behind the bank's new hybrid model and gear up for third-quarter earnings results on Oct. 27. After acquiring Radius Bank earlier this year and obtaining a bank charter, LendingClub, which uses technology and data to streamline online personal lending, began retaining a quarter of the loan volume it originates on its balance sheet and generating recurring interest income. The bank charter also enables LendingClub to use cheap deposits to fund loans and save on origination costs as well.

After a very strong second quarter with this model in place, here are two reasons I am bullish on LendingClub's third-quarter earnings report.

1. A chance to prove its model further

I see multiple ways LendingClub can further prove its model to investors. The company's business model is heavily reliant on loan origination volume. The company is also a leader in market share for personal loans, so if there is good overall personal loan activity in the segment in Q3, I have no doubt that LendingClub will get plenty of origination volume and have a great quarter.

However, I am unclear about the level of activity in Q3. On the one hand, many banks that have reported Q3 earnings have said that the consumer has been very healthy, that credit and debit spending is strong, and that credit card loan originations were picking up in Q3. Unsecured personal loans are not the same as credit card loans, but are an alternative to them, so strong credit card origination activity could be a good sign.

On the other hand, if you look at data from the Federal Reserve, non-revolving debt, which is what LendingClub's unsecured personal loans fall under, grew at a slower pace through the first two months of Q3. Total non-revolving debt volume grew about $66 billion in the second quarter. Through July and August, non-revolving debt only grew $23 billion, with one month remaining in the quarter, although it might have picked up in September as delta variant cases started to level off. 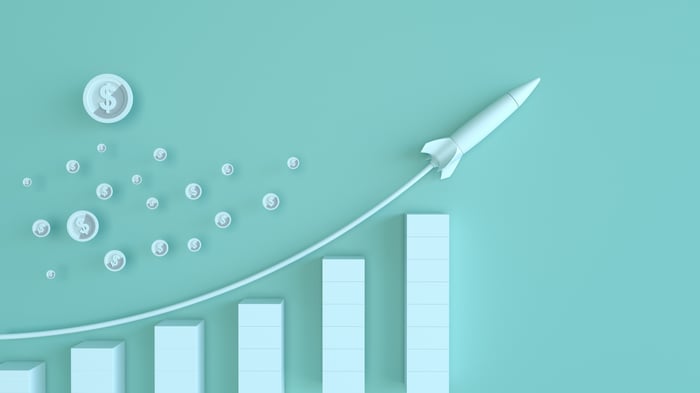 This could be bad for personal lenders, but even if origination activity wasn't there, LendingClub could still outperform peers through its customer acquisition capabilities. In the second quarter, LendingClub originated $2.7 billion of loans. Despite adding 500,000 customers in the quarter, LendingClub CEO Scott Sanborn said on the company's second-quarter earnings call that a "large portion" of its origination went to existing members. The new members in Q2 or others from its 3.5 million existing member base could translate into loan volume in Q3.

Additionally, LendingClub saw growth in the number of home improvement loans and those used for making big purchases in Q2, and these use cases appear to have stayed hot. A survey conducted by Goldman Sachs in September showed that more than a quarter of respondents plan to do home improvements post-pandemic.

Finally, LendingClub at the end of Q2 still had $512 million of high-yielding unsecured personal loans and nearly $2.3 billion of total loans on its balance sheet (including legacy Radius loans). These loans earn monthly, recurring interest income, which can partially offset any weakness in origination activity and help the fintech company beat its peers, so I really do see multiple avenues for the company to show the effectiveness of its model in Q3.

2. Management has been conservative with guidance

Since implementing the new model, management has been careful not to over-promise. As a result, the company has beaten quarterly results handily in each of the first two quarters of the year. In the first quarter of the year, although the bank reported a loss of nearly $0.50 in earnings per share, it beat the consensus estimate by 40%.

In Q2, the bank completely blew out analyst estimates, generating a $0.09 profit on revenue of roughly $204 million. The consensus estimate had been a $0.40 loss on revenue of $129 million. LendingClub wasn't supposed to achieve profitability until the end of this year or early 2022. The blowout results sent the stock up 50% in the week following earnings and led management to significantly raise its full-year guidance.

At the beginning of the year, LendingClub projected total originations of $3 billion, revenue of $250 million, and a loss of around $140 million. After Q2 results, management guided for loan originations in 2021 to be between $9.8 billion to $10.2 billion; revenue between $750 million and $780 million; and net income ranging from a $13 million loss to a $3 million loss.

Despite the unpredictability in Q3 with the rise of delta variant cases, management still provided the new guidance nearly one-third of the way into the quarter, so it likely had a pulse on how originations and revenue were trending. Also, while the economy has gone through some ups and downs recently, the consumer has remained strong and the economy has not shut down like it did in 2020 -- vaccines have proved effective in keeping hospitalizations and deaths down, and the world has learned to live with COVID-19.

Therefore, I find it unlikely that LendingClub's Q3 results won't at least meet management's guidance, which would be a good performance.

LendingClub: Investors Should Hold on a Little Longer
409%