After gains of more than 130% in the last two weeks, the stock is giving some back today.

Shares of on-demand food delivery service Waitr Holdings (WTRH -8.08%) are tanking today, but unless they bought the stock yesterday, shareholders probably don't mind much. That's because it is up more than 130% over the past two weeks. Today, though, shares dropped as much as 16% at session lows. As of 1:15 p.m. EDT, Waitr Holdings shares were still down 11%.

Sometimes it's hard to know why investors bid up a small company like Waitr Holdings. It only had about $100 million in revenue for the first six months of 2021, while incurring a net loss of more than $9 million. In this case, though, the catalyst was obvious. On Oct. 12, Morgan Stanley (MS 0.32%) disclosed a more than 10% stake in Waitr in a Securities and Exchange Commission (SEC) filing. The stock has been on a tear ever since, until today. 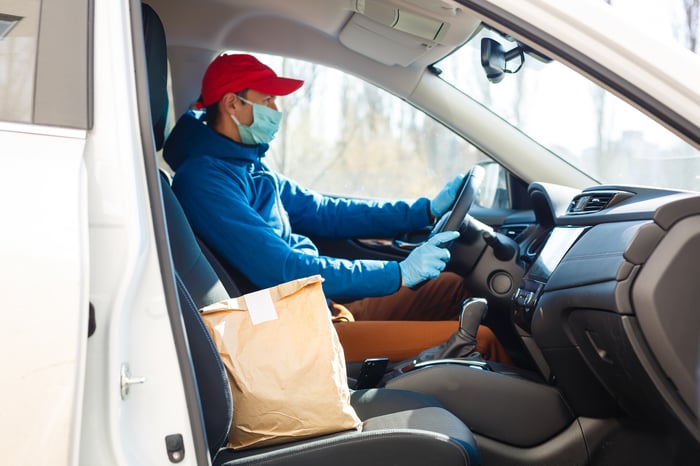 Morgan Stanley's interest may be because the investment bank saw potential in the business after Waitr had a profitable 2020. Even through the fourth quarter when pandemic stay-at-home restrictions had waned, the company reported a profitable quarter. And Waitr also made recent acquisitions in the fintech space, which could be of interest to Morgan Stanley.

In August, the company announced it had closed on three acquisitions of companies in merchant processing solutions. Waitr said in a statement that the acquisitions "will further supplement our offerings as we continue to diversify the Company beyond third-party food delivery."

After such a strong run, however, it's not surprising to see a down day for the stock. Waitr didn't put out any news today, so it seems like it is potentially just profit-taking. Investors won't know whether Morgan Stanley reduces its holdings or not until it issues another filing on its holdings. But trying to trade around what an institution does isn't investing, and shareholders should instead continue to follow the company's progress back to profitability.

Is Waitr Holdings the Next Hot Cannabis Stock?

Why Waitr Holdings Stock Is Up Big Today
409%