eBay sheds active buyers, and those who stayed spent less overall on the platform.

At the outset of the pandemic in 2020, eBay saw a surge of new customers and increasing engagements from existing customers. That's because folks were looking to avoid shopping in brick-and-mortar stores. Now, as increased vaccinations lower the fear of contracting COVID-19, consumers are less hesitant about shopping in person.

So, how did eBay increase revenue despite the re-opening economy? Let's take a closer look at the earnings results and see if we can find an answer. 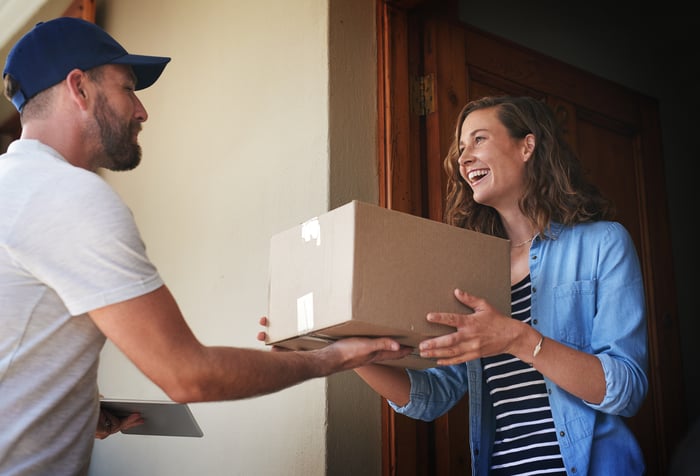 Revenue at eBay increased by 11% from the same quarter last year to reach $2.5 billion in Q3. eBay generates revenue by bringing buyers and sellers together to make transactions on its platform.

At the same time, gross merchandise value (GMV), which is the total value of purchases on eBay, fell to $19.4 billion in its most recent quarter from the $21.7 billion reported the same time last year. That's a drop of 12% year over year. The fall coincides with economies reopening worldwide. This is now the second consecutive quarter where GMV has dropped year over year for eBay.

eBay generates revenue by taking a percentage of the overall value of those transactions as a fee for facilitating the exchange. eBay increased revenue despite seeing a decreased number of transactions in the quarter because it raised the fees it takes from those sales.

Along with a drop in GMV, eBay also lost active buyers in the quarter, falling to 154 million from 159 million in the previous quarter. And like GMV, active buyers have fallen in two consecutive quarters. In addition to reopening economies, management attributes the loss of buyers to its decision to eliminate promotions that attracted low-value buyers.

Still, revenue grew for eBay in the quarter because it raised the percentage of revenue it takes from sellers. That percentage rose to 12.1% from 9.7% in the same quarter last year. The third quarter makes five consecutive where the company has increased the transaction take rate. Helping to further this goal is migrating eBay's payment system away from third-party service and onto eBay. The company estimates the move will bring in $2 billion in incremental revenue in fiscal 2021.

eBay stock sell-off could be a buying opportunity

The market was disappointed with eBay's Q3 results, and the stock price was down 6% in after-hours trading following the earnings release. The consecutive losses of GMV and active buyers raise risks for investors who are unsure how much farther these losses will go. 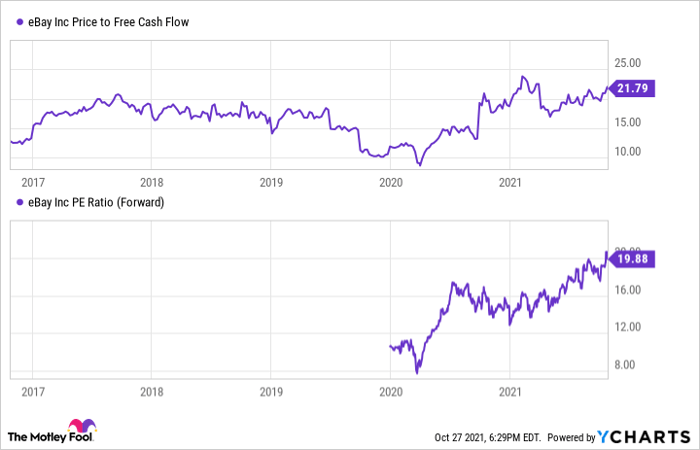 Moreover, eBay's stock has been on fire in 2021. Before earnings were released, the stock was trading at historically elevated levels (see chart).

The company has increased earnings per share at a compounded annual rate of 19.2% over the last decade. Its asset-lite business model keeps profits high by not spending on expensive fulfillment centers. The pullback following the earnings announcement might be a buying opportunity for long-term investors.