It appears as though the streaming giant is about to do what it hasn't done in a long time: generate cash.

Followers of Netflix (NFLX -0.45%) have come to accept that the company has been a cash-burning enterprise. From 2015 through 2019, the business lost a combined $10.9 billion. Developing award-winning content apparently isn't cheap, and Netflix knows this firsthand.

Spending all that cash wasn't for nothing, however. The business that pioneered streaming entertainment now has 213.6 million members worldwide. This scale is a critical tipping point, as the company is now turning the corner financially.

The cash spigot is about to start running at Netflix, and it's a great sign for shareholders. 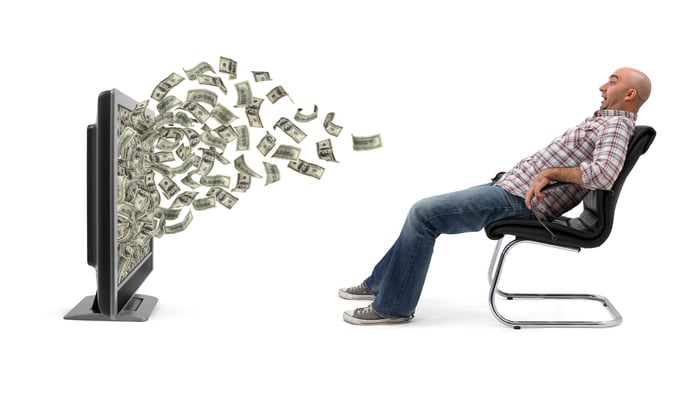 Saying bye to the capital markets

As of Sept. 30, Netflix carried $14.8 billion of long-term debt on its balance sheet, a figure that has risen meaningfully over the past few years. But according to management, don't expect that number to go up anymore. The leadership team announced earlier this year that Netflix will no longer need to raise external financing to run day-to-day operations.

This is a significant milestone for the business, and it proves that the early strategy of investing heavily in content to grow members (while there was no direct competition) was the right move. Netflix has reached a level of scale where it's able to outspend competitors on an absolute dollar basis, but at the same time able to spread those costs over a massive subscriber base. It makes complete economic sense.

The company plans to spend $17 billion in cash on content this year alone. This figure will surely increase over time as the business conquers its global ambition to entertain the world. And it's making a push in gaming as well with the acquisition of developer Night School Studio. To not have to raise outside capital anymore to invest for growth is remarkable. This just wouldn't be possible for a smaller rival because the competition for viewers is so intense today. Additionally, they just wouldn't have the resources to create compelling content on Netflix's level.

Netflix has steadily increased its operating margin from 4.3% in 2016 to 20% expected for this year. The leadership team believes that a 3-percentage-point margin expansion each year is likely, which means the streaming leader has hugely profitable days in front of it. It's not surprising that with this outlook, Netflix no longer needs to raise debt.

Management has explicitly stated that after breaking even this year, they expect Netflix to begin sustainably producing positive free cash flow starting in 2022. Thanks to the financial situation the business is currently in and the margin explosion expected in the years ahead, it's easy to be optimistic.

The company has registered annual revenue growth greater than 20% since 2013. Even accounting for a slowdown going forward, Netflix can reasonably double sales over the next five years to approach $60 billion for 2026. Raising the operating margin by 3 percentage points per year would get us to 35% in five years, meaning Netflix would produce $21 billion in operating income. This leaves plenty of room to invest in content and gaming while still having lots of cash left over.

This is a new chapter in the business' successful history. For investors, get used to a new and improved (and profitable) Netflix.