Here's a closer look at the quarter and why this real estate company appears poised to continue growing at an accelerated pace in the coming quarters. 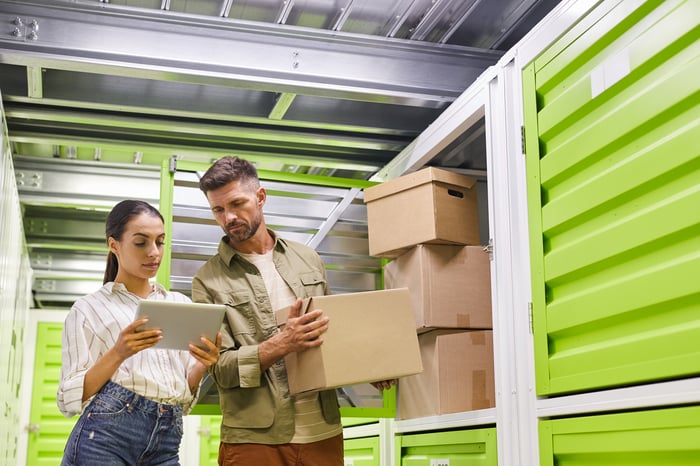 A monster quarter for the self-storage leader

Public Storage had a third quarter for the ages. CEO Joe Russell noted on the accompanying conference call that revenue, net operating income (NOI), and cash flow per share reached record levels during the quarter.

Two main factors fueled the strong quarter. First, the company benefited from a series of acquisitions. Overall, Public Storage has acquired 126 self-storage facilities for $2.8 billion this year, highlighted by its $1.8 billion deal for ezStorage. Those deals helped boost revenue and NOI.

In addition, Public Storage benefited from strong self-storage market conditions in the quarter, which boosted the results of its same-store portfolio. Overall, same-store NOI jumped 20.8%, driven by a 14% increase in revenue and a 6.2% decline in costs. Revenue rose due to higher rental rates and an increase in late fees and administrative expenses. Meanwhile, marketing costs plunged 43.3% as waning competition due to higher industry occupancy levels enabled the company to cut back on advertising.

Public Storage appears poised to continue growing at an accelerated rate in the coming quarters. One major catalyst is acquisitions. The company has continued its recent buying binge, agreeing to acquire an additional 107 self-storage facilities after the third quarter ended for $2.3 billion. The most notable transaction was an agreement to purchase All Storage for $1.5 billion. That deal will add 56 properties, most of which are in the fast-growing Dallas-Fort Worth market, giving Public Storage a dominant position in that metro area.

In addition to that acquisition-driven growth, Public Storage has several organic growth drivers that should continue driving outsized revenue and NOI growth. First, CEO Joe Russell noted that the company has started benefiting from a new driver of storage demand: decluttering. He stated that:

Customers need more space at home due to the shifts in working and living environments across all markets. Unfortunately, the customers that have come to us during the pandemic are now behaving more like traditional customers, meaning they are staying in place as they have come to appreciate the convenience and cost benefit of using self-storage, particularly as residential and commercial spaces become more expensive.

That adds a fifth "D" to the self-storage sector's historical demand drivers of divorce, death, dislocation, and disasters.

Meanwhile, this catalyst is also allowing the company to continue expanding its portfolio through expansion projects at existing locations and building new facilities from the ground up. The company had 1.7 million square feet of development projects underway at the end of September, at an expected cost of $272.8 million. In addition, it had 2.9 million square feet of expansions totaling $457.8 million. It expects to complete these projects over the next 18 to 24 months, providing additional capacity to meet future demand and grow earnings.

Public Storage delivered one of its best quarters in years. The self-storage REIT benefited from strong market conditions and several recent acquisitions. Those catalysts should continue driving outsized growth in the coming quarters, especially given its continued investments to expand its portfolio. That could provide Public Storage's stock fuel to keep rising as it builds on its already impressive 40% rally this year.

This Is One of the Safest Dividend Stocks Around

Stock Market Plunge: Buy This Dividend Stock Before It Pops

Here's Why a Housing Market Crash Could Help This Dividend Stock

Want Growth, Yield, and Global Exposure? Check out These 2 REITS