While the company was not yet profitable, user growth has been strong.

Shares of GoodRx (GDRX -6.24%) are down nearly 17% from its IPO -- and at points in 2021 have fallen as much as 40%. However, I do not believe these results have been reflective of the company's financial performance in the year that it has been public.

The company helps consumers cut costs on their prescriptions, offering free discount coupons that can be used at most pharmacies -- and savings of up to 80%. And those dollars and cents can certainly add up. Since its founding 10 years ago, GoodRx estimates that it has saved Americans $35 billion on prescriptions. So let's take a closer look at its prospects and why I believe it has a bright future ahead. 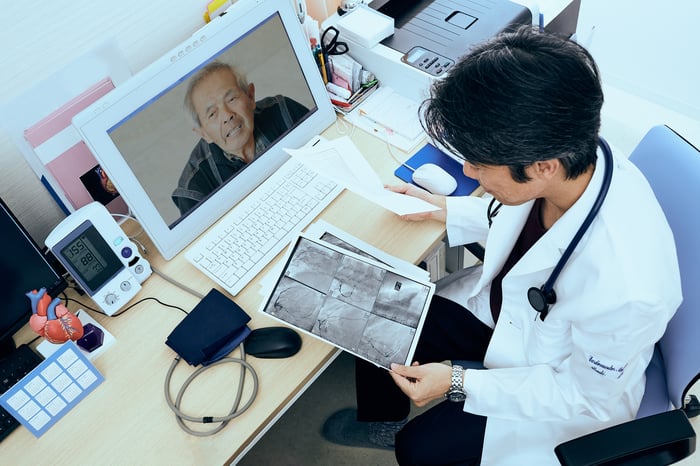 GoodRx is able to offer its discount coupons by partnering with pharmacy benefit managers – a kind of middleman between drug manufacturers and pharmacies. GoodRx passes along the discounts they provide, taking a small cut for itself. In this way, GoodRx is able to give consumers a better bargain than they’d otherwise get from pharmacies which set their own high sticker prices.

The company is clearly doing good things to save Americans money -- and at the same time make money too, allowing shareholders to benefit from the improvement of healthcare in our society.

A lot went right for GoodRx this past quarter. The company saw monthly active users grow 31% year-over-year to 6.4 million. Overall revenue reached $195 million, up 39% from the year-ago quarter. Notably, "other revenue" increased 177% to $23 million. This includes telehealth services (the company receives a fee for each non-subscriber telehealth call it enables) and pharmaceutical manufacturers' ads that appear on its app and websites. The company has also produced $104 million in free cash flow so far this year.

GoodRx recently took two major steps forward. First was its launch of GoodRx Health, a free resource where doctors, pharmacists, and other experts answer crucial health questions that consumers might have on over 350 medical conditions along with 2,500 explanatory videos. The free service could boost ad revenue while building a strong brand for the company. Moreover, GoodRx can try to convert free Health users to free GoodRx coupon users -- and then to paying users through telehealth or GoodRx Gold.

The other highlight to the quarter was the company's subscription business, rising 68% to 1.1 million users while subscription revenue soared 111% to $16 million. Its "freemium" model relies on converting free users to paying users, so the fact that paying users are growing faster than free ones is a good sign that it's on the right track.

The one weakness of the quarter was profitability. The company lost $18 million because of $40 million in stock-based IPO awards to management. Were this a one-time payment, it might not be so bad. However, it has been continuous. Since its IPO, GoodRx has paid out $520 million in stock-based compensation to its two co-founders. On the bright side, these have been decreasing and will eventually end in 2022.

Valuation has been another issue for some investors. Over the past year, the stock has traded between 20 and 35 times sales -- and is currently about 24. After the company reported earnings on Wednesday night, the stock price fell nearly 10%. While the shares have slightly rebounded, Mr. Market has been consistently fickle with this company, leaving plenty of buying opportunities for interested investors.

A strong quarter across the board

The company has consistently reported strong growth across all revenue segments and its user base since coming public, and that did not change this quarter -- showing that consumers are rapidly adopting its services. Now, as the pandemic clears and people head to pharmacies for cold and flu items as well as other medications, GoodRx's growth will likely accelerate.

The company has also built two strong freemium models in the form of Good RX Health and its discount coupon service. Both of these free services have done well at converting users into paying subscribers. With consistently impressive subscription growth compared to free user growth, investors should be confident that GoodRx can continue to convert users.

All in all, GoodRx has four diverse, flourishing revenue streams, each of which could be a sustainable business on its own. The shares currently trade at 25 times sales. While expensive, I think the full value of all four parts of their business would push this valuation much higher. As such, I don't think this company is overvalued today. Mr. Market's fickleness with GoodRx has given investors good opportunities to buy its shares, and now might be another opportunity.