Investors have been waiting months for this moment.

Novavax (NVAX 2.82%) shares have gained about 50% so far this year. That may sound impressive. But the shares have actually dropped 46% from a high reached earlier in the year. The reason for such a move? Investors frowned as Novavax delayed the submission of its coronavirus vaccine candidate to regulators more than once.

Now, it looks like things are back on track for the biotech company. Novavax has applied for authorization or approval in seven countries and the EU. And the company aims to complete its Emergency Use Authorization submission in the U.S. by the end of the year. Investors have viewed an authorization in the U.S. as the major prize for this biotech company. And that means an upcoming filing and potential authorization could be two major catalysts. So now the question is: Should you buy Novavax shares before its big regulatory filing? Let's find out. 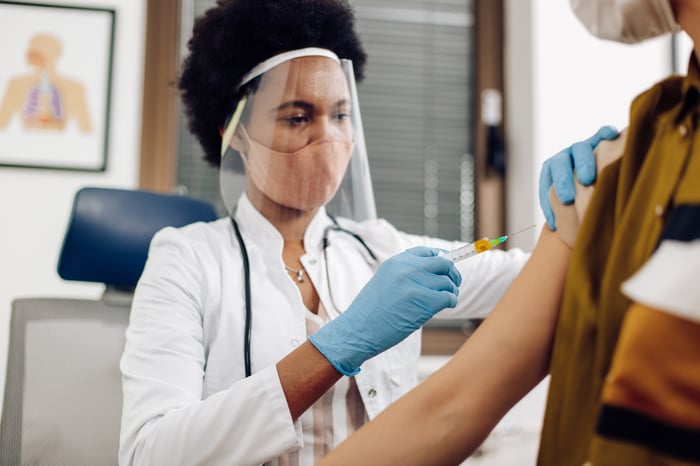 First, let's have a look at the importance of a potential U.S. authorization. It's clear that an entry ticket to the U.S. market won't be as valuable for Novavax as it was for rivals Pfizer and Moderna. They were the first to reach commercialization -- and at a time when vaccines were desperately needed. That was last December.

Let's imagine the U.S. Food and Drug Administration (FDA) grants Novavax authorization. As Novavax enters the market, the situation will be a lot different. Three other vaccines are already in use -- those of Pfizer, Moderna, and Johnson & Johnson. And more than 58% of the U.S. population is fully vaccinated. So, demand won't be nearly as high as it was a year ago.

Still, there is some good news for Novavax. One part of that news is the U.S. already has a contract with the company. The country offered Novavax $1.6 billion in funding and ordered 100 million doses in July of 2020. This means Novavax won't be left out of the U.S. market.

Now here's the second bit of good news. Novavax may even have an opportunity to carve out a bigger share than expected -- due to the nature of its vaccine. The U.S. has heavily relied on the mRNA vaccines of Pfizer and Moderna. These instruct the body to produce a copy of the coronavirus spike protein -- the protein used to infect. And this prepares the body to fight off the real coronavirus.

But Novavax offers another option. The company's candidate is a protein subunit vaccine. It uses the coronavirus spike protein in nanoparticle form to trigger an immune response. Some healthcare providers may prefer this type of vaccine for certain individuals.

Of course, all of this doesn't mean immediate U.S. revenue for Novavax. The company has said it plans to distribute vaccine doses first to countries most in need. That means revenue may start out slowly. Lower income countries pay less for vaccine doses than higher income countries. But that's OK. It's most important for Novavax to truly gain market share wherever it can -- that will determine order volume to follow. The idea is, if countries are satisfied with the vaccine, they likely will reorder it.

Let's get back to our question: Should you buy Novavax shares before its U.S. regulatory filing? As I've hinted at above, the U.S. probably won't be Novavax's biggest market. But it still represents a win for the company. And that's why I expect news of the filing to lift the stock. And a positive regulatory response could send the shares significantly higher.

It's important to remember biotech vaccine stocks are still best for investors who have some risk tolerance. That's because these players so far heavily depend on the coronavirus vaccine for revenue.

If you don't mind that risk, Novavax makes a good buy ahead of its filing. But I'm most interested in the long-term story. And there too, I like what I see. Novavax is the farthest ahead in development of a combined coronavirus/flu vaccine candidate. And Novavax also has its flu-only candidate -- NanoFlu -- that has delivered positive pivotal trial results. These potential products may drive revenue gains in a few years. So, investment in Novavax today could mean share performance right around the corner and much farther down the road.