AMC Entertainment Holdings (AMC) has arguably been one of the more popular stocks of 2021, at least among meme stock traders. The sustained attention from those buyers has raised AMC's stock price by nearly 1,900% in 2021.

Underlying it all is a movie theater business recovering from the pandemic's devastations, which shut all of its theaters temporarily at various times in 2020 and 2021. AMC reported fiscal third-quarter earnings on Nov. 8 that showed another step toward recovery. But that does not necessarily mean you should buy its stock. Let's take a look at why. 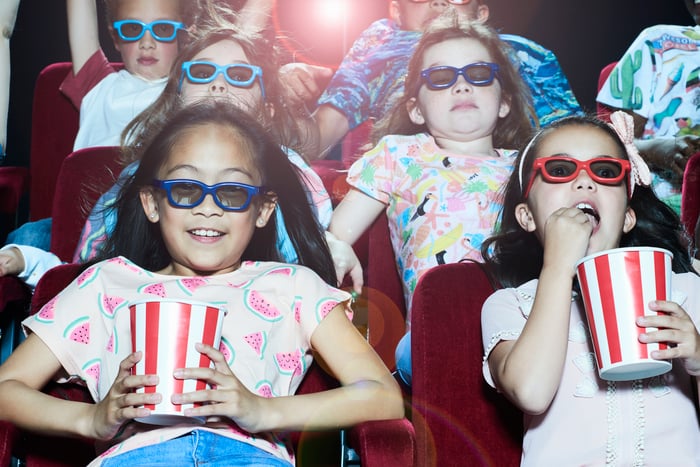 AMC is recovering but is far from full strength

The magnitude of AMC's recovery from the pandemic was highlighted in its third-quarter revenue of $763 million. That was a massive increase from last year when it reported revenue of $120 million. Nearly all its theaters have reopened, and folks feel comfortable leaving their homes again.

Moreover, studios are releasing blockbuster films on the big screen. There was a time during the most-acute phases of the pandemic when studios were either pausing the release of notable films or releasing them straight to streaming services.

Still, AMC is a long way from being back at full strength. If you annualized the most recent quarter's $763 million in revenue, AMC would make $3 billion for a year -- well below the $5 billion-plus in annual revenue it generated in 2017, 2018, and 2019.

What's more, in making moves to deal with the pandemic, management has altered the company's financial position for the next several years at least. As of the end of the third quarter, AMC has over 513 million shares outstanding. That's almost five times higher than the roughly 107 million it had at the same time last year. A higher share count means that if the company makes a profit, it needs to be split among more shares, causing much lower earnings per share.

AMC is not out of the woods yet

There is no telling if or when the company will return to profitability; AMC lost $224 million on the bottom line in the third quarter. The movie theater chain has a heavy load of fixed costs, namely rent and interest expenses related to debt, regardless of its revenue. In the quarter, the former was $215 million and the latter $89 million. Those costs are the primary reason AMC has lost money on the bottom line in five out of the last 10 years.

Being in the movie theater business is tough when many potential theatergoers can subscribe to Netflix all month for less than the price of one movie ticket. Those economics only get worse for AMC. For instance, a household of five can subscribe to the premium Netflix service for about $18 per month, while one movie screening at AMC would cost about $50 (and closer to $80 in some large metro areas).

While it's excellent news that AMC is recovering from the pandemic, that is no reason to buy the stock.